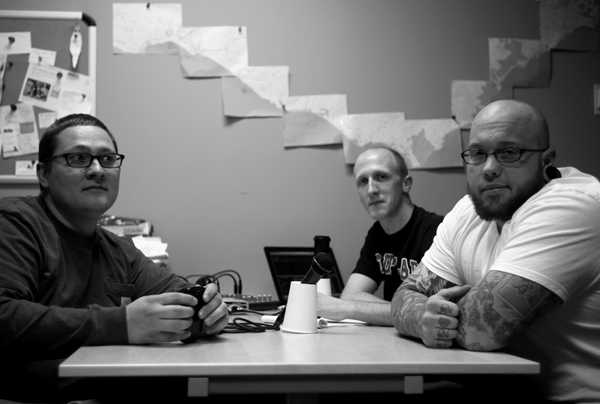 The Summer of 2008 was difficult on the hardcore community in Utah. There wasn’t much left of a scene that was once packed with fans, musicians, and genuine veterans of the movement. Trevor Hale (Cherem, Tamerlane), Dan Fletcher (Skeiff d’ Bargg, City to City, First Blood), and Sias Parsons all agreed on that point. The three spent many similar summers attempting to maintain a fire in the scene that they helped solidify in the late 90s by booking shows at consistent venues.

These veterans of the Salt Lake hardcore community, are the same guys who uploaded the first post to grudgecityactivities.com in July 2008. According to Hale the purpose of the site is to document “anything that has to do with Salt Lake City hardcore, past and present.”

The major contributors to GCA are all still active in the scene that they found as teenagers. Parsons is a show promoter and booker who also supportively toured with several bands other GCA founders were in. Hale has been recording guitar on Tamerlane’s second album and playing with Collapse, and Fletcher still works within the hardcore community as a member of the GCA team—a vital asset to the community even though he currently lives and works in New York City. Their backgrounds are diverse, but their musical foundations are similar. “I thought Kurt Cobain was God in elementary school and when I heard him talk about Black Flag’s influence, I snatched up Damaged without a second thought.” Fletcher says, “That record set it off.”

Parsons was also a fan of punk rock and would catch a bus or get a ride from Ogden to Salt Lake to watch shows, eventually leaving behind punk for a more heavy element: “Hardcore was the next logical step in my musical evolution,” he says. Hale has a similar experienced, “My taste started with punk, Propagandhi, Misfits… and the stuff gradually got heavier. The first time I heard Integrity it just blew my mind. Earth Crisis was a big influence [too],” Hale says.

“Kids are still venting their frustration with the world by stomping on each others heads in sweaty basements and back-alley clubs.”

The vegan-straight edge band, Earth Crisis seemed to be on the stereo of all these guys in the late 90s, and on the news, too: “I remember seeing footage from an Earth Crisis show in Salt Lake on America’s Most Wanted and thinking it was the coolest thing I’d ever seen,” Fletcher says.

Though the majority of the GCA staff is vegan, they don’t highlight that fact at all on the site—it’s not their goal to preach. They feel the same way about the straight-edge lifestyle as well, “Everyone that runs that site is straight edge and has been forever but that’s not a focus of the site,” Hale says. Parsons agrees: “We’re not trying to promote straight edge, that’s just who we are.”

Eventually Fletcher got behind the local band Cherem, which he and Hale eventually joined. “I remember thinking Cherem was the coolest band to ever exist when I was in high school.” Fletcher initially saw the band play at a coffee shop called Undergroundz that was located between Lost Art Tattoo and Uprok and was inspired by their stance on consuming animals. “I went vegetarian at 15 and then I caught this band saying, ‘cut the crap, go vegan … and do something to end the suffering of animals while you’re at it.’ That was so heavy for me…kids channeling their convictions directly into music as a catalyst for action. I was so honored to join that band a few years later.”

The anti-drug and anti-animal cruelty calls to action that Fletcher found so heavy, and also grabbed Parsons and Hale, eventually found itself at odds with the media and local conservatives. Suddenly, hardcore music seemed a little more dangerous than it had before. Fair-weather fans fell away, after some bad press dealing with violence and animal liberation movements were applied to all people involved with the scene—even the substance-using and meat-eating kind, not just the “guilty” few.

“The need for hardcore and its cathartic release is only growing.”

Bands like Cherem still played and inspired new fans, but the scene began to shrivel bit by bit. Eventually, it has reached what Parsons describes as a low point with a hazy future, “It looks grim. It was teetering on the rim of main stream music for a long time nationally and I think it’s almost reached its tipping point.” Parsons says, “I think if more kids don’t get involved with local music, here and in other states, local hardcore communities are going to be phased out by the bigger promoters who don’t care about the bands, the kids or the music.” These are the reasons behind GCA’s birth, the rest is history—a history that GCA is documenting and preserving on their website  “Every Monday, we’ll be adding a new article to our Salt Lake Hardcore 101 section, which includes interview features with Salt Lake hardcore-punk-related bands, labels, magazines and shops dating back to the 70s,” Fletcher says.

“We also have a digital sampler that Trevor has been working hard to get put together.  It’s being called the GCA Mixtape #1. It will feature new music [11-12 tracks] from many of Salt Lake’s current bands [Tamerlane, City to City, etc.] and there will be a free download available on the site.  We’re also trying to get the podcast out more regularly,” Parsons says.  Other GCA members include Casey Sartain, who helps with the aforementioned GCAcast and Clint Halladay is involved with booking shows. These guys, along with other steady Grudge City fans, keep the rest of the team in the loop and help along with shows as well. That is one of the things the hardcore community is known for—they look out for their own, ferociously so. “GCA couldn’t be what it is without the bands and kids that support it,” Fletcher says.

Grudge City supports the scene that its members helped create by bringing in national artists to help enliven the local music scene. Unlike other collectives, they’re a group who care about the local economy, and music fans, putting local bands on the bill, too. “We never set out to start a booking agency or anything like that, we had all just met so many people in bands, from all of us being on tour at one point or another,” Hale says, “and wanted to help out and return favors, that we kind of got a reputation as a show promoter. The show stuff just kind of happened and we kept on rolling with it.”

The list of bands GCA has brought to the state to pump up local interest is great, especially considering that it wasn’t a major reason behind the inception of GCA. Bands like Starkweather, Sleeping Giant, Broadway Calls, Unrestrained, Parasitic Skies, Signs of Hope, Life or Death, Braveyoung, Time For Change, Convicted, Harm’s Way, Rhinoceros and This Time Tomorrow, have all been brought in thanks to GCA related efforts.

Though GCA is spread across the US right now, Fletcher doesn’t see this as a hindrance: “Hardcore is a universal community it wouldn’t be right to take it out of that context and focus solely on SLC. I’m still very in touch with Salt Lake City. New York’s a great place to gain experience, but Utah is my home and I’ll be back in due time.” Fletcher says, “I’ve actually found that I post just as much, if not more, Salt Lake content as the site continues to pick up steam.” Fletcher draws on his experience as a former editor of the University of Utah’s Daily Utah Chronicle, and as a City Weekly contributor, to get his point across professionally.

“Grudge City Activities will forever be a resource for what’s going on in the Salt Lake hardcore scene.”

Hale also comes from a journalistic background with experience as a local writer for City Weekly since 2004, and a stint as a Chrony editor. “I just want to write. That’s all I’ve ever wanted to do and I’ll do it any way I can—whether it’s in physical print or on the web,” Hale adds. These guys’ journalistic chops ensure the GCA content is really good, solid writing. They’re legit—and their expanding content reflects that: “Every Friday you’ll find a ‘5 Questions’ column which celebrates the Salt Lake hardcore scene through brief interviews with individuals that have made an impact on the scene.” Fletcher says, “We just launched a daily feature called ‘Essential Listening’ that provides a download link to some of the best punk/hardcore records of the past three decades,” Hale says. “Every day you’ll find the ‘Tonight in SLC’ post where we publicize three events worth checking out in the city,” Fletcher adds, “these columns run alongside our daily news feed and our weekly poll.”

With sites like Grudge City popping up, the beast of hardcore may not yet be dead. These guys don’t think so, at least: “Salt Lake hardcore’s future will be just like its past: passionate kids playing passionate music for all the right reasons, always extremely genuine and always under-appreciated,” Fletcher says. Hale continues the thought, “Whether the people playing it are as passionate and into it as they have been in the past is a different story, but there’s always going to be people that want to play aggressive, heavy music.”

“Kids are still venting their frustration with the world by stomping on each others heads in sweaty basements and back-alley clubs,” Fletcher says, “the need for hardcore and its cathartic release is only growing.” Grudge City will be right alongside chronicling that catharsis. “Grudge City Activities will forever be a resource for what’s going on in the Salt Lake hardcore scene,” Fletcher says, “you’ll always be able to find an up-to-date listing of shows and bands, as well as an ever-evolving history of the Salt Lake hardcore scene. We’ve all passed 25 and we’re still booking, playing, and going to hardcore shows. I don’t think the site is going anywhere anytime soon.” Hardcore isn’t either, and if it ever does, it won’t lose its grip without a shout.