Dwellers play a style of music they refer to as “gut rock,” a sort of non-genre of writing fun, simple music born of gut feelings and instinct. “We didn’t want to play anything that was genre-specific,” says guitarist/vocalist Joey Toscano. “If we ever thought about [a part] more than five minutes, we’d just look at each other and say, ‘Fuck it, man! Gut rock!’ and that would make us choose the simplest path.” 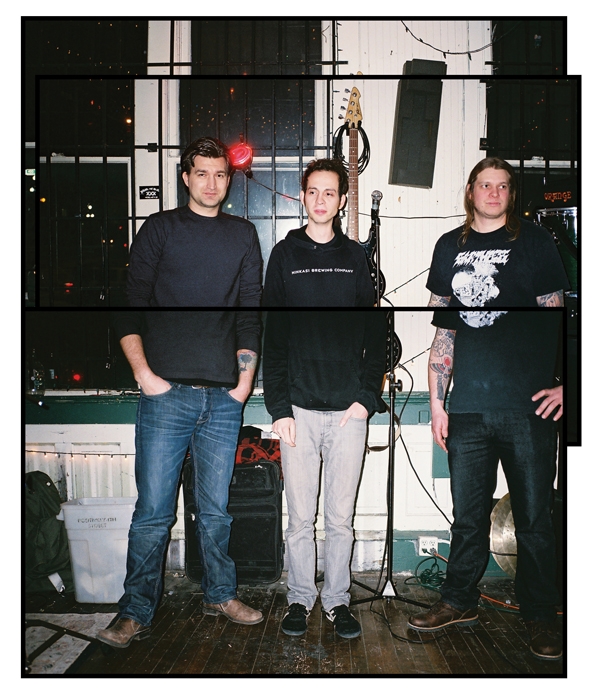 Salt Lake City’s Dwellers kick off their springtime tour on March 6 at Burt’s Tiki Lounge. The tour includes a performance in Austin on March 16 as part of the Small Stone Recordings Showcase at SXSW. Photo: Sam Milianta

In a room lit by Christmas lights strung up in the rafters, only partially shielded from the sound of cars driving along 400 South, the three members of Dwellers reminisce about their band’s beginnings. Originally started as an audition to play drums in Iota, guitarist Joey Toscano called Zach Hatsis of Subrosa and Laughter to practice with him in a guest room in his house. Soon, they found themselves playing what they refer to as “gut rock,” a sort of non-genre of writing fun, simple music born of gut feelings and instinct. “We didn’t want to play anything that was genre-specific,” says Toscano, who thinks using the name gut rock has helped their writing process. “If we ever thought about [a part] more than five minutes, we’d just look at each other and say, ‘Fuck it, man! Gut rock!’ and that would make us choose the simplest path.” For a year, the two jammed together and released a four-song demo, which displayed a more raw, Southern side of the band’s heavy psychedelic blues. But going forward, they needed a bass player. Hatsis’ Subrosa bandmate Dave Jones expressed interest in joining the band, and when Dwellers moved into their current practice space, he was finally able to join them.

Toscano’s previous work has been primarily with Iota, whose heavy psychedelic undertones show through in Dwellers, which he says is “everything in Iota that I wanted to do.” Though, he is careful to point out that nothing in Iota is holding him back: “I always wanted to focus more on dynamics and write songs that are more expressive. I purposefully set out to have less massive distortion and more honesty. Distortion is great, but you can hide behind it,” he says. In his eyes, “Dwellers definitely set out to be very honest in its approach,” instead of gunning for a certain genre or sound.

Good Morning Harakiri, officially being released March 13 by Small Stone Recordings, owes its vibrant beats to Hatsis’ inventive and skillful drumming. Yet his contributions to the album also extend to less conventional forms of percussion. Finding a vibraphone in Andy Patterson’s recording studio, he quickly found a couple of space-rock-inspired segments to incorporate the instrument into the album. “One of my favorite things about this project is that we can layer the fuck out of it with really simple stuff, using different instrumentation. It just adds color to the record,” says Hatsis, who is happy to make use of his extensive background in percussion. “I find myself with a shit-eating grin on my face whenever we play, which is always a good thing.”

Jones has ventured into the realm of dark rock n’ roll before with his band Old Timer. He claims that Dwellers’ heavy blend of blues and classic rock drew him into the group. “It’s everything I like, mixed together,” says Jones—but it was more than just a simple question of taste: “I definitely like working with [Toscano and Hatsis], because they’re easy to work with and things just flow. You’re not banging your head against the wall,” Jones says. Hatsis agrees, “It’s a no-brainer with Dave. He’s great to play with.”

Even with its full lineup of metal veterans, Dwellers never fully crosses over into the riff-haunted domain of metal. Yet, some still apply the label to their music. “I just don’t see heavy metal in Dwellers at all,” says Toscano, who feels the label encourages prejudicial listening. “It’s not anything negative. I love metal, I grew up with metal. I’m a metalhead.” Yet the problem arises because the band’s members sincerely wish to tap a different realm of influences. “Obviously there’s going to be some bleed-over,” says Hatsis, “but I want this band, and I think everyone’s on the same page, to be going out a totally different vein than previous bands we’ve been in.”

Dwellers will be playing the Austin, Texas SXSW music conference this March, shortly after the release of Good Morning Harakiri. “The very first year I went there, I just went and saw pretty much all the bands I’d ever wanted to see in three days,” says Toscano, who says that the experience drove him to come back later and play at the event. “It made me realize that you don’t have to be some big deal just to go out there and play.” The focus on smaller and lesser-known artists makes SXSW a great place for a local band like Dwellers to get some national exposure, which will aid the band in their plans to tour more extensively throughout the states.

However, SXSW is just one of many destinations the band has in mind. So far, tour ideas include the Northwest and California, with a possible tour on the east coast after recording their next album in Boston’s Mad Oak recording studio. Their goals are long term and ambitious, but their focus is still on their honest commitment to gut rock, which hasn’t let them down so far. “I think if you’re not having fun playing music, you’re doing it wrong,” says Hatsis.

Salt Lake City’s Dwellers kick off their springtime tour on March 6 at Burt’s Tiki Lounge. The tour includes a performance in Austin on March 16 as part of the Small Stone Recordings Showcase at SXSW.