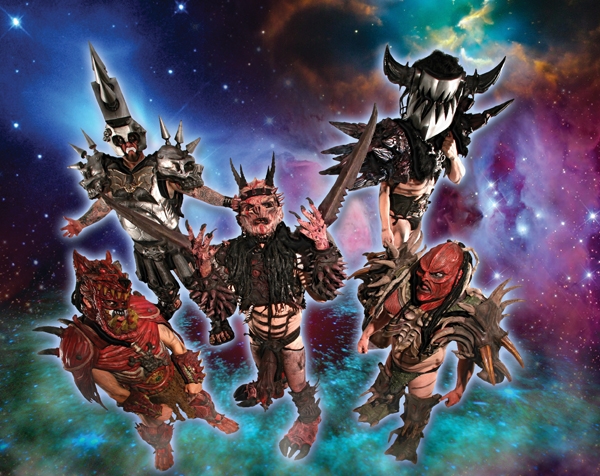 The bloody mayhem, hold-nothing-sacred, in-your-face attitude that is GWAR is one of a kind. The band’s more-than-shocking concept of punk-fueled thrash metal and blood-soaked theatrical live performances is legendary. Yes, GWAR are truly space aliens lead by the steady, madman hands of Oderus Urungus. GWAR are not only cult underground heavy metal figures, but household names in the musical realm. They’ve been pissing off conservative parents for decades and never really cared what the press or any speaker of ill had to say. I started off a telephone interview with Oderus by telling him I was afraid of him. He fed off my fears and left me stuttering out questions. Enjoy the fruits of my embarrassment from talking to Oderus.

SLUG: GWAR are basically road warriors. Every time you hit the stage you always have a lot energy, so how do you keep up that energy for every time you play?

Oderus: Well, drugs primarily, and the fact that we are from outer space. Normal gravity doesn’t affect us so badly here, so what is completely exhausting for you is something we can do easily in our sleep. Also, when I say drugs I mean we actually have to take drugs to counteract how awesome we are. The only way I can even possibly have a level playing field between me and the rest of reality is that I’m so drunk and pilled out that somehow I lower my game to everyone else’s standards. It requires a lot of alcohol to keep that going. I’m already knee-deep into it now and I’ve only been awake about 30 minutes. It also helps because we’re undead, undying, immortal cosmic warlords.

SLUG: That kind of answers my next question because GWAR has been playing as a band for about 25 years now, so I was going to ask: What do you do to stay young? Not saying that you’re old or anything.

Oderus: 25 years is a lot for a human being, I understand, but for GWAR it’s like a half a gnat’s eye blink. If gnats had eyelids to blink, it would be about a half a gnat blink. But you see, we do have complete control and mastery over time: we can speed it up, slow it down, rewind it, fast forward it any way that we want, so when we’re enjoying something we tend to slow things down. We’ve been enjoying our reign of terror on Earth.

SLUG: At the moment, I’ve been quite struck by the new GWAR album Lust in Space and am enjoying it quite a lot. Is there an underlying theme for the record?

Oderus: Lust in Space tells the story of GWAR’s final escape from earth. After 25 years of bitching about it, GWAR finally managed to commandeer a Scumdog starship and return to outer space to defend the universe against the menace of Cardinal Syn. Now, it turns out the universe has been pretty much conquered already, so we were forced to return to Earth to defend it from the crippling cosmic intergalactic asshole that Cardinal Syn is, and of course to hook up on the cook up because it turns out that Cardinal Syn has actually stamped out all forms of drugs in outer space. Earth is the only place left in the entire fucking universe where you can have heavy metal, get a blowjob and smoke crack. So this makes Earth, rather than being the shittiest planet in the universe, actually elevated to becoming the best.

SLUG: Well, thank you for defending Earth and keeping it that way.

Oderus: It’s not really by choice. We would have nowhere else to go, if it wasn’t for fucking Earth. We’re definitely defending the crack fields. If Earth falls, GWAR will have nowhere to party and we cannot have that.

SLUG: Is there anything more metal than GWAR?

Oderus: I don’t know. I really don’t even think the solid, liquid plutonium meteors that are hurtling through the depths of space are even more metal than GWAR. Maybe diamond metal.

Oderus: You’re right, it is. And honestly, it’s hard to have a conversation with someone who is not a fellow god, but I’m doing my best here. Do you have any other questions? I can answer more of life’s mysteries.

SLUG: Is there a specific reason why GWAR has such love for heavy metal?

SLUG: What do you think about people that go to GWAR shows just to see the show, who don’t even know the music or any of the songs?

Oderus: I love them just like anyone who contributes their hard earned sheckles to the colossus that is GWAR. I’m not about to point at a painting and say why it’s good. People express themselves and express interest in things because of their own reasons and whatever they are is fine with me. There is no correct reason to worship GWAR, there is only a wrong way and that way is not on their knees. A lot of old people like GWAR. They’re not so much into the heavy metal—they’re more into needlepoint and crochet but they appreciate the GWAR spectacle, and there is always the chance that granny will be raped and feel sexual bliss perhaps for the last time in her life. A lot of people know that Oderus likes to fuck old ladies, and they’ll bring their grandmother down to the show and they’re hoping that if I stick my dick in her, it might shock her out of her coma—it’s worked more than once.

If you have yet to have your GWAR cherry popped, or just need some bloody good metal refreshment, GWAR is performing at Saltair on Nov. 21 in support of their newest metal opus, Lust in Space. Oh, and by all means, take your grandmother. Seriously.