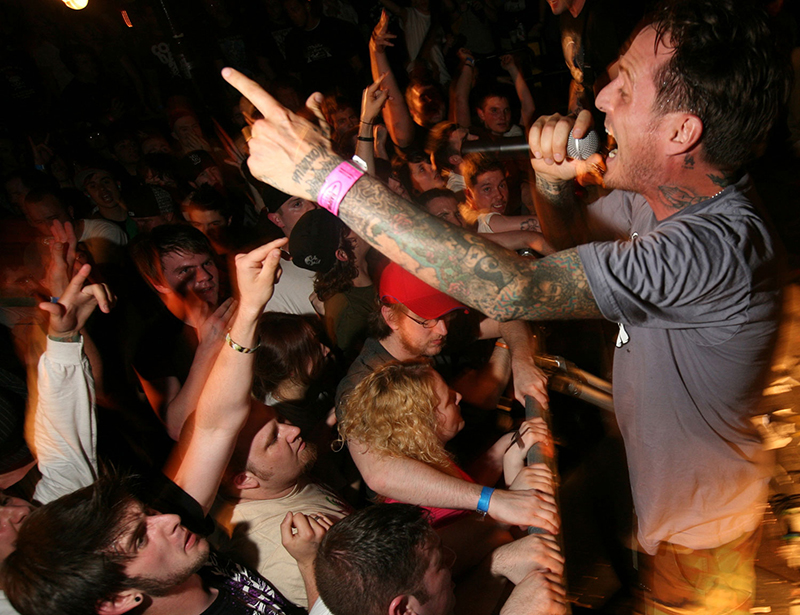 H2O: Still Faster Than the World

New York hardcore youth crew skate punks H2O once released an album called Go! From this album, the slogan “H2O Go!” became a reprising statement of the band itself. H2O have been active since 1995 and, according to bassist Adam Blake, they “may have slowed down a bit, but damn it, we are trying to keep up!” They hit The Complex on Dec. 16.

After seven years since the release of Nothing to Prove and keeping a voracious touring schedule since then, the band decided that it was time to release some new music. “There comes a point when you play the same songs so many times that they start to lose their shine,” Blake says. “Unless you want to be a ‘nostalgia band,’ you need new music to justify your existence.” Like a production line, the music and lyrics gradually got pieced together by each band member until Oct. 6, when they had a finished product—their seventh full-length studio album, Use Your Voice.

Clocking at only 22 minutes, Use Your Voice is incredible. “One of the things that I love about taking a long time to make a record is that it all feels exciting and new again. It never feels like work,” says Blake. “We do care about it, and we want it to sound awesome, but we don’t want it to sound like a bunch of guys going through the motions, and we like to think that that spirit and energy is reflected in the music.” That energy is evident—the songs are catchy, punchy, and riddled with the PMA (positive mental attitude) mantra that is synonymous with the band itself. They touch on skateboarding, guilty listening pleasures, true love, fatherhood, the negativities of social media, being comfortable in your own skin and, of course, using your voice—with name-dropping and references to bands that most avid punks will pick up on. Examples include: “I looked up to you / said I don’t want to grow up / out of step with the world!” (“Father Figure”); and “I use my voice / when the people look the other way / got to inspire the youth of today!” (“Use My Voice”).

Of the new songs that H2O have been playing recently, Blake says that “Skate” has the biggest reaction, most likely due jointly to its music video being released two months before the album and its rally of gang vocals: “The sweat! The pain! The scars! The scabs! Skate and destroy!” to get audiences flared up. However, “Popage,” a direct tribute to the Descendents, got some flack among fans—most likely caused by some younger listeners who felt betrayed after discovering that hardcore aficionado vocalist Toby Morse enjoys listening to pop music. However, Blake’s counterargument is almost verbatim to the message in the lyrics: “You’re doing yourself an emotional disservice by listening to only one genre, and pop songs have a certain spirit to them, and we do find ourselves singing along to them even if we can’t relate to the often simplistic lyrics,” he says.

The band received some complaints on their Facebook page when they announced that their SLC show would be at Urban Lounge, which, unbeknownst to the band, is a 21-plus venue. Holding true to the youth crew ethos, playing all-ages shows is vital not only to the band’s legacy but also to its growth—“As a rule, we try to always play at all-age venues, especially in cities that we haven’t been to in a while,” says Blake. “It’s very important to us that our message is communicated to young kids.” With the aid of their fans informing them through social media, the band was able to get the show moved to an all-ages venue before it was too late—it wouldn’t be a triumphant return to SLC if H2O played a bar show.

Outside of recording and touring, each member manages to keep busy in their personal lives. Blake is a trainer out in Southern California; Rusty Pistachio (guitar) runs a business where he makes custom jewelry; and Toby (vocals) runs his own T-shirt company as well as his organization One Life, One Chance and is a full-time dad on top of that. Todd Morse (guitar) left H2O earlier this year just before they recorded the new album to continue his other musical endeavors—being on the road with The Offspring and fronting his band Toddsplanet. “I guess the industry term would be ‘musical differences,’” Blake says. “His heart just wasn’t in it for this record, and he plays so much that he wants to spread his wings and play different types of music.” No one argued with his reasoning, and Blake also stated that if he ever was to quit the band, he would be able to recognize that feeling the way Morse did.

It’s been four years since H2O played in SLC—when they opened up for Blink-182 and My Chemical Romance at USANA Amphitheater—and it’s been even longer since they played a headlining show here. Since then, Blake says that they’ve felt obligated to give the kids a club show and are only now able to make good on that promise. H2O will be performing Dec. 16 at The Complex, so all you punx, skaters, straightedgers and hardcore kids come out and support one of the pillars of NYHC and see for yourself if H2O is really still faster than the world.