00:00 / 20:24
Spotify Stitcher
RSS Feed
Share
Link
Embed
"The character I play is very innocent, but also very heroic and powerful, and teaches people how to get outside of themselves a little bit and look at the world in a different light—to challenge them to see the world with a little bit more beauty and reverence, but definitely, the drumming drew me to the show."

How To Become a Blue Man: An Interview with Brian Tavener 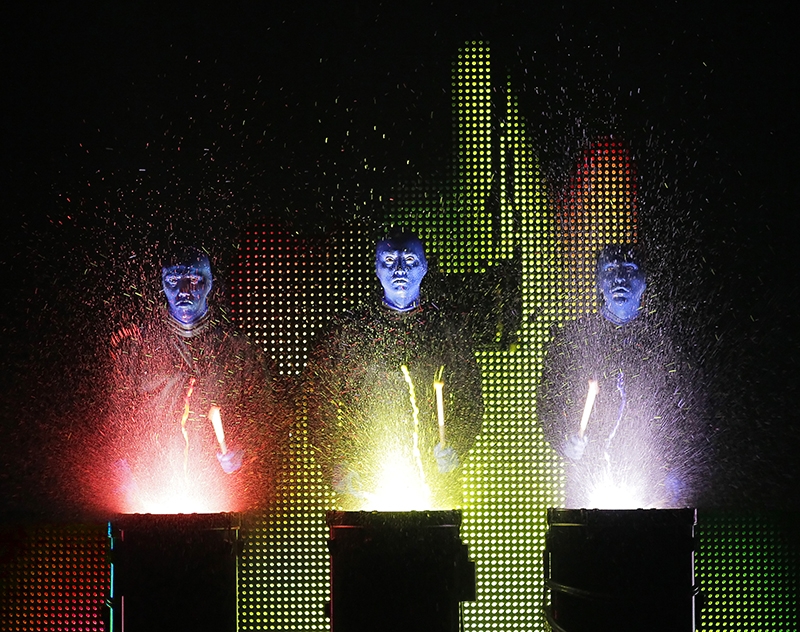 To be bald and blue, you’ve got to be yourself. Photo: Paul Kolnik

“We’re communicating in drumbeats⎯the interview will be in Morse code,” I told a friend of mine while discussing my SLUG interview with Brian Tavener, a member of the touring portion of the world famous Blue Man Group. The group, which has been around since 1987, is an instrumental musical and performance art–based show featuring three “Blue Men” and a band of four. Since its founding, the organization has become a worldwide pop culture phenomenon and has made appearances on several television shows and events. What exactly does it take to become a Blue Man? I sat down and talked about just that and more with the North Carolina native performer during his tour with the group around America.

SLUG: You’ve been with the Blue Man Group for quite a while now—how did you get involved?
Brian Tavener: I’ve been with Blue Man for over six years, but I haven’t been touring with them . I played in the Boston show for most of that time for my onset in the company, but now I’m on this tour. I was in a band at the time⎯all it took was a little bit of reaching for the stars and challenging myself. I saw Blue Man in Raleigh where I was living [before I got involved] and I was blown away, so I decided to send them my stuff⎯that was kind of the beginning of the snowball.

SLUG: What kind of band were you in when you decided to audition for Blue Man?
Tavener: It was a pop rock band. It was a little bit more avant garde—I made my own hand drum kit. One of my influences at the time was Guster. I made pop drumming sounds out of all hand drums.

SLUG: So is the drumming what drew you to the Blue Man Group?
Tavener: Definitely the drumming⎯yeah, but probably more the vibe of the show. The character I play is very innocent, but also very heroic and powerful, and teaches people how to get outside of themselves a little bit and look at the world in a different light—to challenge them to see the world with a little bit more beauty and reverence, but definitely, the drumming drew me to the show.

SLUG: I didn’t realize there was so much acting involved in the show. Did you have much acting experience when you started?
Tavener: I was heavily into acting in high school and early college. I was cast as Romeo in Romeo and Juliet when I was a freshman at NC State. That was when I realized I had to be onstage. You can’t be a musician and an actor at the same time unless you’re a Blue Man, so this is the best job for combining both.

SLUG: What was the audition process like?
Tavener: It’s pretty intense. You have your first audition—that one is really hard to get past. If you can get past the first audition you’ve obviously impressed them—you’ve shown them something they want to see more of. Then for the call back you go to New York and learn parts of the show and they get you into costume. They get to physically see you in the character, what they call “bald and blue.” How you deal with that is part of the process. A lot of people don’t fit the bill because they’re trying too hard; you have to just be yourself. I have a lot of friends that have auditioned since I got involved and my advice to them was to just trust that [the producers] know what they’re looking for. Have confidence in yourself that you’re okay with whatever you fall into.

SLUG: How many people were you up against?
Tavener: My initial audition in L.A. was a big group. It was by appointment and there were probably 20 or 30 people, but the callback was about seven. The callback goes into the most intense part of the audition process, which is a two month long training process and you essentially learn the show five days a week once you’re hired on by Blue Man. It’s very intensive, it could probably be a reality TV show.

SLUG: So there’s a lot of improvisation in the show then?
Tavener: It’s a lot of improv, but it’s not like we’re changing the writing. It’s the way you time certain portions of the show. We don’t have any dialogue, so we have all of this control over nonverbal communication in how you perform each night. Recently I’ve been having a little bit of a darker character, but sometimes I’ll have more of a Looney Tunes character. You can change how you portray certain sides of the show and that’s the beauty of the show: it can change every night.

SLUG: How does touring differ from performing strictly in Boston?
Tavener: The one thing on tour that I love the most is seeing different groups of people in different cities and how very regionally different they can be while being similar at the same time. In Boston you can pick up on where different tourists are in the crowd, but on tour, it’s very much a focus on what America is like.

SLUG: Is this current tour any different from the regular shows in major cities?
Tavener: This tour is somewhat similar⎯it’s got some of the same material. It’s the new show that’s in all of the cities, but it’s probably the best looking and most exciting show out of all of them. It’s just a really fun experience for everybody. Most of the time we have a full show, but every now and then we have limitations on the stage size so we have to take out certain pieces, but in Salt Lake City for sure we’ll have the full show.

SLUG: The Blue Men are famous for drumming on things like PVC. Was it hard to learn to use those sorts of things as instruments?
Tavener: Yeah it is, it’s just as difficult as learning every other instrument, if not more. Luckily, my musical background isn’t as technical versus just learning how to make noise out of something and make it sound good. If you’re technically taught on other percussions, there are some techniques [with PVC] that are difficult to pick up on.

SLUG: It seems like you would have to throw away all previous knowledge of how to play a percussion instrument, sort of like having to throw away all knowledge of your native language in order to learn how to speak a new one.
Tavener: Totally, exactly. I think it’s also important because we don’t have any language in the show, so the music is kind of our way of talking to people.

SLUG: So going back to your work outside of Blue Man, you were in a band but you also produce as a solo artist on the side. Can you describe your sound to us?
Tavener: Experimental. I have a weird relationship with my own music. It’s like journaling. My sound isn’t commercial whatsoever; I’ll only get better at doing it as I do it, and I know you won’t like it, but that’s okay—that’s my sound.

There you have it⎯how to become a Blue Man in 72 easy steps. The Blue Man Group is currently touring the United States and will be stopping in Salt Lake City on April 1–6 next spring at Kingsbury Hall, and you can buy tickets here. The Blue Man Group also regularly performs in cities such as Orlando, Las Vegas, New York, Boston and Chicago, as well as other major cities around the world. If you decide to check out their Salt Lake stop, Tavener mentioned that the performers in the show interact with the audience offstage after the performance, so be sure to say hi—although he may not verbalize a response.