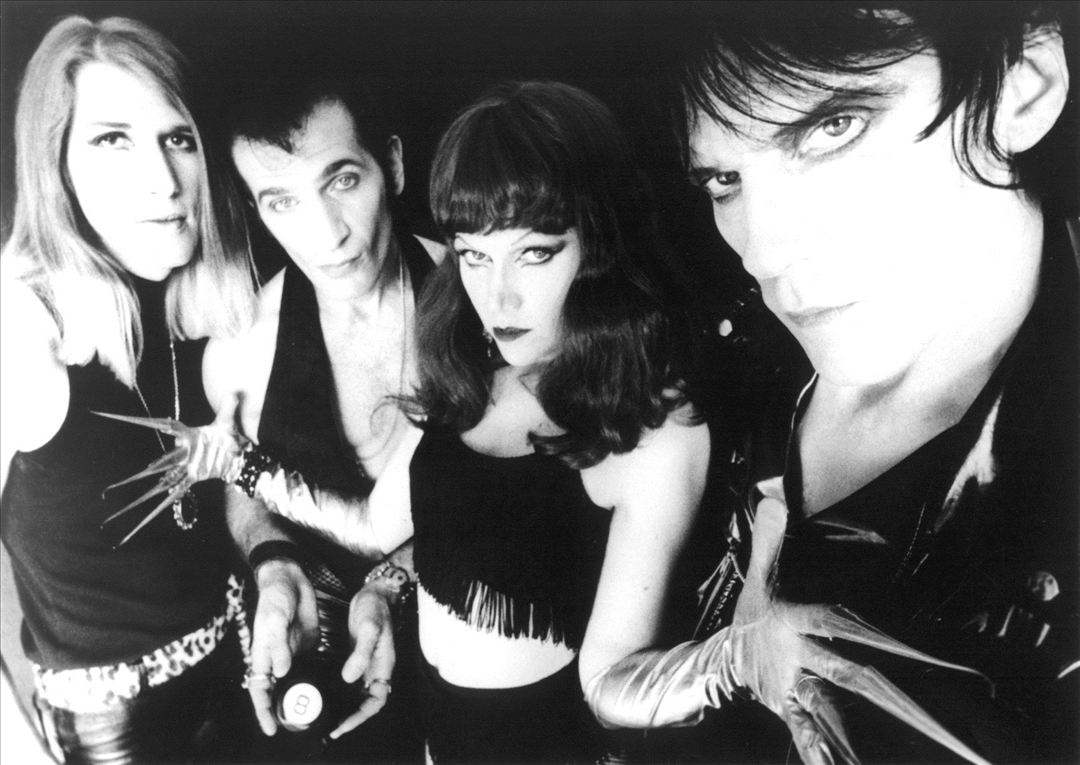 How to Build a Better Monster: My Psycho-Sexual Dream of The Cramps

Last night I had a dream. Or was it? A giant black-and-white spiral pulled me from my bed. I passed through its middle and found myself in a science lab with a strange-looking man on an operating table. He had dark hair, pale skin, a thin body and flamboyant 50s clothes. Hovering over this man was a woman stunning to behold. She had fiery long red hair, a skimpy 50s-style outfit and wicked heels.

It was Poison Ivy; the guitar player for the rockabilly, B-movie nastiness godfathers The Cramps. She told me she was working on her mate and lead vocalist for The Cramps, Lux Interior, putting all kinds of evil and perverse things into him to prepare for their upcoming tour.

Poison Ivy: Rockabilly without a doubt. Rockabilly is sexy. Rockabilly musicians were the rebels of their time. I think a lot of that is missing in today’s music.

SLUG:You guys just released a new record and your last one, Fiends of Dope Island, last year. Previously, The Cramps put out a disc every three, four years. What has changed?

Poison Ivy: We can put the records out now because we own our own record label, Vengeance. We had a bunch of new material and wanted to put a lot of older records back out there. However, it turned out to be a lot of work that took a lot of time and money. We originally wanted Fiends of Dope Island to come out in 2002, but because of all the work on the label, we were not able to put it out until last year. In the past, we also had all these problems with other record labels and band member changes.

Poison Ivy assured me that the band has not diminished over the 27 years of being together; in fact, they are even more crazy and wild now then ever. Lux’s eyes grow into black-and-white spirals which hurl me through their center until I emerge in my parent’s basement watching the “Bikini Girls With Machine Guns” video on 120 Minutes in 1989.

SLUG: A lot of your lyrics are rooted in perverse sexual themes. Does writing them come naturally since you and Lux are a couple?

Poison Ivy: Absolutely. Most of it does have to do with our relationship, but it also has to do with the fact that rock n’ roll has a lot to do with sex. We try to channel that sexuality into our music. After all, in the beginning, rock n’ roll was street slang for sex, and that is something that we wanted to recapture in our music.

Mesmerized by the kinkiness and sassy fun of the band’s video, I vowed that I would buy their album, Stay Sick, the next day. The black-and-white spiral came out of the television and I was in an audience crowd waiting for The Cramps to hit the stage. It was the Look Mom No Head! Tour. The Cramps hit the stage and pandemonium exploded.

SLUG: Your live shows are wild craziness that words can’t do justice in describing. How do you prepare for that kind of energy?

Poison Ivy: Before a show, we like to prepare mentally by ourselves. We don’t really hang out with anyone before the show. However, we do invite certain entities to join us backstage, but I can’t really discuss that in great detail. When we go onstage, it has a lot to do with the audience; whether they’re into it or not. Lux is quite the character onstage whereas I’m a lot more introverted then he is. I tend to let my voice come out through my guitar. It’s like I become a part of my guitar.

Halfway through their first song, the house lights suddenly came on, blinding me. Suddenly it was 1997 and Epitaph Records had just released The Cramps’ Big Beat From Badsville. I was reading their CD review in Alternative Press.

SLUG: Some critics complain that you guys have not changed your sound much over time. How would you respond?

Poison Ivy: We arrived when we started. We are keeping the rock n’ roll torch alive. There has been a lot more attention to this kind of music lately and we are glad to be out there keeping the spirit of it alive. It’s not radio music and it cannot be dismissed as something classified within the music industry by their terms. Sure, some will see this music as the latest fashion trend, but there are those who enjoy the music for what it is: primal energy.

After reading the negative critique of The Cramps record, I tore up AP and leaned back on my bed.I woke with a sudden start. I checked the clock. Oct. 1, 2004: four in the morning. I sighed. It was just a dream. Then I heard her voice calling me.

SLUG: Last year, you came to DV8, but the show got cancelled one hour before the doors were to open. What happened?

Poison Ivy: It had something to do with the club not having the right kind of permit. We had sound-checked and were ready to go when they told us about the permit. We had heard stories about bands having their equipment confiscated by the police and we did not want that to happen to us midway through our tour. We were really bummed about not playing since we had driven a long way to get to Salt Lake, but it really was out of our hands since it had been a screw-up by the promoter.

Her voice was a soft whisper. “The answer to your question is, if I were to become a monster, I would be Dracula and Medusa combined. Lux would be the Werewolf and Frankenstein mixed together. Now go to sleep and dream about old cars and pin-up girls showing you their underwear.”