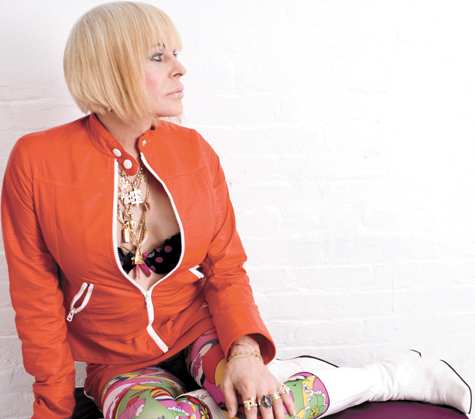 How to Short-Circuit Control: Genesis Breyer P-Orridge and the Third Mind

In 1959, Byron Gysin and Williams Burroughs found themselves at the “Beat Hotel” in Paris where Burroughs completed his infamous novel, Naked Lunch. Here he collaborated with Gysin on several projects, one of their most prominent being “cut-ups,” a process in which they would literally cut up their writings into paper strips and lay them next to each other, forming a new train of thought. They realized that what came out of these cut-ups wasn’t something that either of them had created individually but a new form of collaboration, shaped by chance. In essence, two full minds were now integrated through words to create a new “third mind.”  This seemingly simplistic concept went on to influence Gysin and computer technician Ian Sommerville who in 1961 turned the Third Mind concept into a tangible object called a dream machine.

The dream machine is a tall, plastic cylinder with slits cut in the sides and rotated at 78 or 45 revolutions per minute while a light bulb is suspended in the center. Light flashes through the holes at a constant frequency and corresponds to electrical oscillations that are present in the human brain while relaxing. By sitting close to the machine while it oscillates, the brain’s optical nerves are stimulated and electrical pulses altered. This is said to produce hallucinatory shapes and colors that can become meaningful to the viewer without the use of drugs. Everyone experiences the dream machine differently, and because there is no central authority, it becomes a symbol of overcoming control.

In 1970, eleven years after the invention of the dream machine, artist and musician Genesis Breyer P-Orridge (COUM Transmissions, Throbbing Gristle, Psychic TV) began corresponding with Burroughs. They soon formed a strong friendship that would last decades and lead to several artistic collaborations. Their conversations would formulate inspiration for P-Orridge and become a driving force in he/r future career as an artist. These talks with Burroughs became a major influence in P-Orridge’s lifework including he/r philosophy on mainstream society, governmental control and how to rebel against it. “Borroughs told me, ‘Gen, Your task is to find ways to short-circuit control,’” P-Orridge  said.

As P-Orridge’s interest in cut-ups grew, Burroughs eventually introduced he/r to Gysin. S/he would travel to Paris and visit both Gysin and Burroughs whenever s/he could and became well-versed in the Third Mind and symbolism of the dream machine.

In 1975 Burroughs helped P-Orridge find funding for he/r performance art group, COUM Transmission. “It was Burroughs that got all the first grants for COUM Transmissions. He had friends at the Arts Council, and he very actively supported and helped to keep COUM Transmission going,” P-Orridge told blurt-online.com in an interview conducted earlier this year.

COUM Transmissions got into trouble with the British Parliament for using this grant money to create an irreverent performance art show involving bloody Tampons in jars (their legendary Prostitution exhibit) at London’s Institute of Contemporary Arts. Bad press ensued and using what they had learned from Burroughs and Gysin, group members cut up the articles, rearranged the verbiage and created a Third Mind directly from the media.

“The work we were doing with COUM Tansmissions was very much about breaking down sexual roles and deciding who creates the boundaries about what is acceptable,” P. Orridge told SLUG in a recent interview. “If you are to make your own rules as an autonomous person, you need to figure out where those rules reside.”

They projected sexual and violent images during their shows and performed them on stage. “People used to say, ‘Do you do this to shock people?’ and we used to say, ‘No, we do it to find out why people are shocked.’”

Again pulling from inspiration from Burroughs and Gysin, Throbbing Gristle used the cut-up technique—this time in sonic form—creating a new musical genre, industrial music. The slogan, “Industrial Music for Industrial People,” became the band’s mantra and they started Industrial Records (with help of another recording artist Monte Cazazza) and released several of their own material and the work of others.

“There’s an irony in the word ‘industrial’ because there’s the music industry. And then there’s the joke we often used to make in interviews about churning out our records like motorcars––that sense of industrial. And … up till then the music had been kind of based on the blues and slavery, and we thought it was time to update it to at least Victorian times—you know, the Industrial Revolution,” P-Orridge told RE/Search in issue #6/7.

In 1981 Industrial Records released Nothing Here Now But the Recordings, a selection of Burroughs’ early cut-up tape experiments—some recordings dating back to 1959. This would be the last record released by the label.

After changing the world through countless artistic and musical breakthroughs, Throbbing Gristle broke up in 1981. The crew split into three equally progressive projects, COIL, Chris & Cosey and P-Orridge’s Psychic TV.

Psychic TV not only shared Byron’s love of the Third Mind and dream machine, but also his interest in Aleister Crowley. All three played an influential role in the music and art that the group produced.

A PTV subsect created an occultist fan club of sorts called Thee Temple ov Psychick Youth. Members studied and practiced various forms of Magick and created their own philosophy. After 10 years, P-Orridge left both PTV and TOPY at its peak, with the “fan club” internationally boasting close to 10,000 members.

P-Orridge left both projects behind in 1991 to work on Thee Majesty, his spoken word venture. Over the next decade P-Orridge would continue to collaborate in the Third Mind with countless societal influences such as Dr. Timothy Leary, Master Musician of Jajouka and Merzbow. Various artforms were used: video, sonic, the human form and paper cut-ups.

In 2003, P-Orridge began he/r most prolific Third Mind project to date with Lady Jaye Breyer P-Orridge, who became P-Orridge’s “other half.”  The concept of “Pandrogeny” was born in the form of the pronoun, S/HE.

“We were thinking about the cut-ups, Burroughs and Gysin and how they came up with the idea of the Third Mind, how words when they were cut together didn’t belong anymore, they created this other entity. We thought maybe if we take it a step further than Burroughs and Gysin and create a third being: the Pandrogyne …” P. Orridge said in an interview earlier this year to regenmag.com

P-Orridge fell hopelessly in love and began to form ideas of what should be he/r next step in counteracting control.

“The first level of the investigation was that we realized it was a way to express absolute love. To want to be … not to just be with each other but to look like each other was kind of an expression of love. The same as having a mutual orgasm or making a baby,” P-Orridge explained in 2007 interview to soundsect.com. “Making a baby in some way is Pandrogenous. A baby is two people combined. So we were thinking about that and looking at that and we took it very serious because we are both performance artists as well.”

The idea of two becoming one grew to more than just an idea but a tangible goal. On Valentine’s Day 2003 the two took action and underwent breast augmentations simultaneously. This would be the couple’s first step towards becoming the same entity called a “pandrogyne” which would eventually merge the two into the same person named Genesis Breyer P. Orridge.

“Lady Jaye drew out of me fragments and half-formed suggestions and formed them into ideas. S/he feminized me.” P-Orridge went on to say about he/r other half, “Why were we rejecting this binary male/female situation? It illuminated the issue because we were trying to look like each other.”

According to he/r, a pandrogyne is “A literal melding of two minds. Neither one of us alone can be it except together.”

P-Orridge believes that combining minds and bodies runs perpendicular to the current trends of isolation and destructive nationalism. “If we all become intellectually and physically united and represent union and healing and problem solving instead of paranoia and fear and intimidation, that’s where the human species can evolve and change its behavior. It might have helped us to survive as a species in prehistoric times to be brutal, but that’s a behavior pattern that we need to get rid of. It is now destroying us instead of saving us. It represents the divine union.”

Burroughs and Gysin got as far as uncovering the idea of a program and programmers, P. Orridge took it a step further by adding he/r pandrogyne concept. Together, Genesis Breyer P-Orridge and Lady Jaye Breyer P-Orridge decided that it was DNA that was the ultimate controller. “The DNA message is that it replicates through us, records everything that happens and keeps that in the next person. We are basically temporary vehicles for it to live in. It needs our bodies to exist and for interbreeding with other programs and for working out new logarithms,” P-Orridge said. S/he went on to explain, “If it works as a model in order to wake ourselves up as a species, that we are at the mercy of someone else’s software in the DNA, then, how do we change our behavior? How do we counteract that software?” S/he proposes that to counteract control we have to “first regain ones individuality—the autonomy and the right to control your own body and what you do with it. And secondly, share responsibility of spreading this idea.”

We have a prophet, seer and revelator in the form of Genesis Breyer P-Orridge. S/he made he/r way into the culture war scene via membership of COUM Transmissions, then industrial pioneers Throbbing Gristle and more currently in Psychic TV or PTV3. Heavily influenced by he/r friends Byron Gysin and William Burroughs, P-Orridge has made a career of questioning norms in pursuit of a more harmonious world. Challenging the concept of control has been a hallmark of P-Orridge’s work and s/he has spent her life understanding and counteracting it.