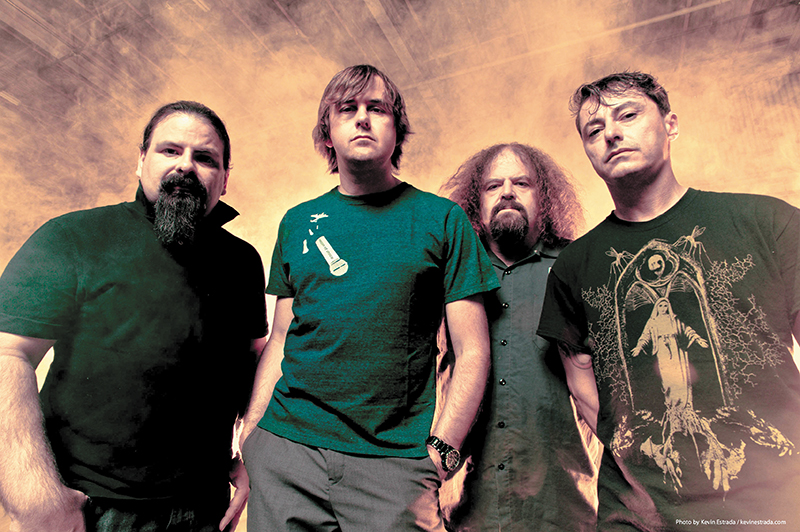 Napalm Death are often referred to as a political band but also frequently referred to as one of the most, if not the most, influential grindcore bands ever. Napalm Death play Salt Lake City at the Urban Lounge on April 29 with openers Melvins and Melt Banana. Napalm Death vocalist and frontman Mark “Barney” Greenway is one of the nicest, most humble guys I’ve ever talked with from the extreme music scene, offering insight into politics and what it means to be human. As a vocalist, Greenway’s voice is more akin to something inhumane, screaming the lyrics he writes in the most violent fashion possible while coexisting with the extreme ferocity of hyper-speed drumming and crunchy/crusty guitars. “That’s the real paradox to it, because the lyrics are about trying to promote humanity and ask, ‘Why is it that a certain percentage of people in the world have completely forgotten or never realized what humanity actually meant?’” says Greenway.

To me, Napalm Death have always been a band you can instantly recognize, with a brash, often insanely fast sound and distinct vocals. The legacy of Napalm Death has always been how unique they are. When I brought up how Napalm Death are often lumped into the metal sub-genre category, Greenway didn’t deny the band’s metal influences and acknowledged the myriad sounds that the band tries to incorporate. He described the band as a mish-mash of more sub-genres than he cared to list, and he did list off quite a few. “Napalm is the sum of many component parts, and everything comes from somewhere,” says Greenway. “It just sounds like it’s got a special something that could only have come from those four individuals. I can’t put into words what that is. It’s a certain feeling.”

Napalm Death’s latest album, Apex Predator – Easy Meat, centers on a lyrical focal point that was ignited by a horrific, tragic event: The Rana Plaza tragedy in Bangladesh. In April 2013, a building that was already deemed unsafe collapsed, killing 1,130 textile workers. “It was an event that undermined and really brought home the whole issue of exploitative labor,” says Greenway, “which is not out there enough. I don’t feel people know about [what happened]. I think that event really compounded the real injustice—the inhumanity—of exploitative labor.”

In one song on the new album, “Dear Slum Landlord…,” Greenway addresses how people are set up in housing complexes that big companies own and then allow gangs to exert control over. Lyrically, Apex Predator comes full circle in expressing how people all over the world, despite culture and class, are denied the freedoms that they deserve. The album cover art helps solidify this sentiment. “The meat that’s in the tray on [the album cover] is actually meant to be the human beings that are involved in this,” says Greenway. “Those that have been … treated as commodities … are consumed by the process, which puts them to [the very] work that makes them expendable.” At first, Apex Predator is intense and filled with grind rage, but with close listening, Greenway’s voice becomes propelled by a riff-based songwriting structure, comparable to a provocative, 40-minute explosion. On “Hierarchies,” the clean vocal points state, “Those vicious cycles, ecocide / We spilled the blood of innocents.”

Greenway mentioned how dehumanizing exploitative labor is because it reduces people to being components of a machine. When the machine breaks down, you just fix it or buy a new machine. Greenway aims to bring the issue to a bigger stage and help make a difference, but despite the public outcry and news media coverage, at the end of the day, nothing happened—as exemplified by the response to the Rana Plaza tragedy—and the same type of exploitative and expendable labor persists.

Talking to Greenway was like having a long, polite political conversation. I would not want to get into a pissing match over certain things with Greenway because he knows his shit. Of course, I had to bring up the election and race for presidency, as well as Donald Trump. “You would think I’d be super offended by him, but I’m not,” says Greenway, “because he’s so ridiculous that he hasn’t got the capacity to offend.”

Joining Napalm Death’s upcoming U.S. tour are the always eccentric Melvins, who, from album to album, have explored and experimented with every musical genre under the sun. Also joining are Melt Banana, a pop/noise/grind band from Japan. A tour with sounds of oddity and extremity is the definition of variety. “One of the things that keeps us stimulated is making sure that life has variety,” says Greenway about Napalm Death’s upcoming U.S. tour. That statement epitomizes what Napalm Death are all about: sticking to their musical gusto and not conforming for any reason, but also making sure that they never repeat themselves musically—remaining a genuine band who cares deeply about its art. The art comes to Salt Lake City on April 29. You don’t have to agree with Napalm Death’s views to appreciate the band’s honesty, transparency and, of course, their music.