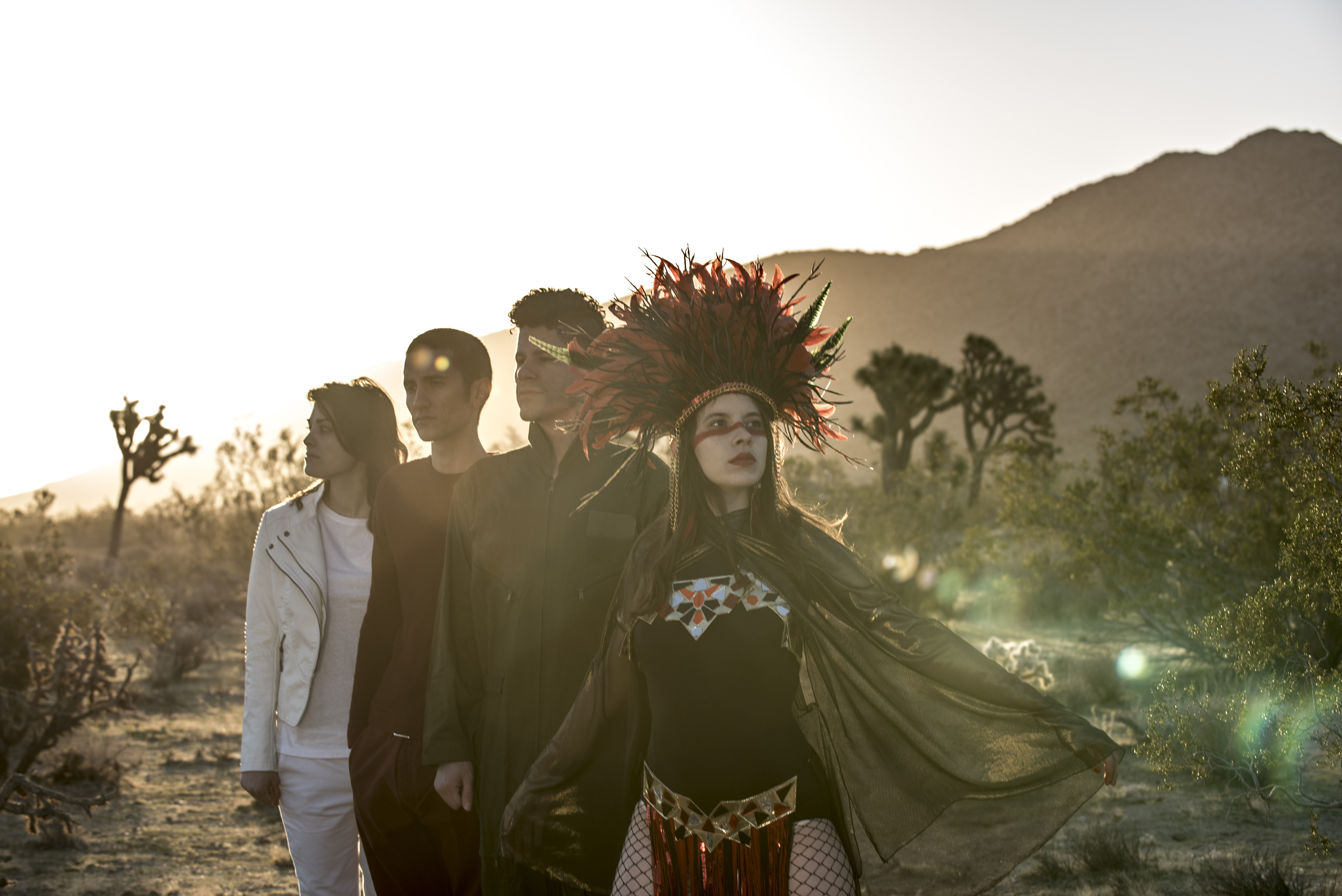 Talking with Teri Gender Bender was a complete delight. She is polite, gracious, humble, open and honest. Teri Gender Bender spoke with me on a lazy afternoon from a sidewalk in Puerto Rico about such topics as: her band, Le Butcherettes, their phenomenal new album bi/MENTAL, the trauma and healing of family and staying positive in the present moment.

SLUG: What was the inspiration behind bi/MENTAL?

Teri Gender Bender: It’s the accumulation of my upbringing within a dysfunctional family. Before it was my biggest shame—now it’s my biggest pride. Being sick and still being able to run a family takes a lot of will power, and for that, I’ll always be grateful to my dad and mother for doing the best they could. There is a lot of stigma in Latino culture with mental illness—both my mother and father had mental illness, dysfunctional but functional. We had lots of violence in our house, lots of police visits but it worked, somehow, until my father passed away. The thing that really set me off was when my mother tried to kill me with a kitchen knife. I had to lock her out of the house like an animal. It cut me very deep. My way of dealing with it was songs expressing confusion and hurt [as I wasn’t] understanding where it was coming from. We went to San Francisco to record this record, and what started in a dark place ended in a beautiful situation. We gave these songs a home.

SLUG:  Jerry Harrison of the Talking Heads worked with you to produce this album at Rise Records. What was your experience working with him?

TGB: Amazing! He is humble with no filter. He has an old-school way of looking at music. He was hard on us as musicians, but gave me a lot of freedom and respected my vision of each song. He wanted to make sure that the record was a cinematic experience to mimic the mind going mental.

SLUG: Not only do you have Jerry Harrison on the record,you have Jello Biafra, Alice Bag and Mon Laferte contributing. How did that come about?

TGB: They came after the record was recorded—I felt [that there was] still something missing with it. “mother/HOLDS” wasn’t even going to be on the record, but with Alice Bag’s voice, it would change everything. We shared dialogue without shame. The idea of death unites humanity. Alice released that into the song. We went into the studio, and the first take we screamed—screaming at the people that hurt us. It was a nice, cathartic experience. After that, we were covered in tears and snot. This art stuff is magic. Mon Laferte is a great artist in her own right. Starting in the barrios of Chile – her life is like a movie. Every time I run into a good person, I want to touch them—rub some off on me.

SLUG: Who were your heroes growing up?

TGB: I didn’t mean to be talking shit on my family. My parents were my heroes, [even] with all the limitations they made us. They fought for us. I like people like Andy Kaufman—the art of the mysterious, writers like Sylvia Plath. [What ever] is going on in their minds, I want to go there.

TGB: I want to see it as a positive thing. The whole political thing that we are going through right now, I know it’s horrible and it’s fucking scary, but I want to see it as something exciting. We are having some crazy times that our children’s children will be asking us [about,] “How was it back then?” I am a witness to this. What scares me? Violence. Acts of violence make me feel hysterical—I don’t want to see anymore deaths. Be positive—start with yourselves.

SLUG: You recently said, “Life is a cycle, the moon, the sun, the ocean waves transcending into sand. It will be OK.” What did you mean by that?

TGB: When I was going through that thing with my mother, when I thought she was going to kill me, in that instance, I thought my life was over. This is fucked up, but it’s all about perspective. The most beautiful sunset in the world, it’s going to pass. It’s all a cycle. It’s so important to praise the moment as much as possible. I remember I was 15 yesterday. Life is long, but it goes by fast. It will be OK.

Teri Gender Bender and her band Le Butcherettes are playing Kilby Court on Feb.15 and their great new album bi/MENTAL will be released on Feb. 01.