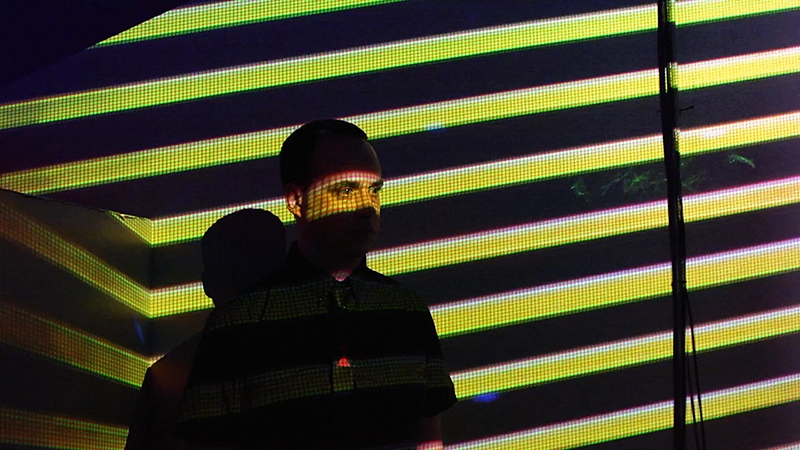 Electronic musician Solvent aka Jason Amm traces the history of the modular synth in documentary I Dream of Wires. Photo courtesy of Solvent.

I Dream of Wires: Modular Synthesis with Solvent

Though it’s often considered an esoteric contraption riddled with advanced circuitry, the modular synthesizer is a machine hardwired for human relationship. Endless panels of dials and knobs, buttons and blinking lights, intricate patches of seemingly disorganized wires—all are tactile controls begging to be played by the human hand. Modular synthesizers have played an integral role in both the popularization of electronic music and avant-garde sonic experimentation, and are now, more than ever appreciated among musicians. In the independent documentary film I Dream of Wires, Canadian-based electronic musician Solvent (Jason Amm) traces the history, demise and resurgence of this modular mindset with its peculiar subculture’s leading artists and manufacturers.

Analog modular synthesis began in the 1960s, nearly simultaneously by the pioneering companies Moog Music Inc. and Buchla & Associates. Since Wendy Carlos immortalized the synthesizer as an aid in the re-creation of orthodox musical dogma—with 1968’s Switched-On Bach—electronic enthusiasts have prized modular systems as essential tools in the creation of new methods of music and sound. But as cheap, accessible analog and digital synths flooded the commercial market in the ’70s and ’80s, the electronic subculture left all things modular behind. Musicians sold off their equipment while the most committed collectors kept all they could find in proper condition—setting the stage for a phenomenal comeback.
I Dream of Wires’ director and co-writer, Robert Fantinatto, started the project in his spare time to explore this recent, vibrant reemergence of modular synthesis. It was a culture that he, like many, thought to be extinct in the wake of digital technologies and laptop-based musicianship. Thinking that there would only be a small but fanatical amount of interest in such a film, Fantinatto began interviewing people whom he knew to be passionate modular enthusiasts. Early on, Fantinatto approached Amm, a fellow Toronto-based artist who had recently incorporated modular synthesis into his decade-long analog synth practice. “I thought, ‘Let’s see who I can get involved in interviewing for this documentary,’” Amm says. “I started emailing around, and to my surprise, the list of people we had managed to get confirmed interviews with was mind-blowing.”
Like the obsessive culture that it was documenting, the film’s ambition grew steadily until it became the definitive documentation of the modular world. “Once we got an interview with Trent Reznor,” Amm says, “that opened the doors and it seemed, [from] that point, we had really no trouble getting almost anyone that we wanted to interview for it.” Within a short time, the roster was bolstered by synth legends like Vince Clarke, John Foxx, Chris Carter, Daniel Miller, cEvin Key and Gary Numan, whose 1980 song, “I Dream Of Wires,” lends the film its title.
That the film grew to such proportions was indicative of the passions of those in the modular mindset and of the dedication of Fantinatto and Amm, who realized the entirety of the project—directing, interviewing, filming, editing and producing—themselves.
Amm wasn’t always a modular obsessive, though. He’s been creating electronic music under the name Solvent since the late ’90s, preferring analog synthesizers to modular throughout most of his career. “The real hesitation with the modular stuff for me,” says Amm, “was that it does bring out an obsessive nature in people. When you enter this modular mindset, you’re always thinking of ways of reconfiguring your sound—you can get lost in that world of obsessive collecting, thinking of new modules and planning out different setups.” The obsessive nature of module collecting is considered a black hole that turns productive musicians into equipment collectors. “I know a lot of people who have gotten carried away with that, and it ends up that they no longer play music,” Amm says. “They just end up becoming soundscape home-studio hobbyists. That was definitely something that I worried about happening to myself.”
To counteract the hobbyist tendency, Amm tasked himself with creating new musical work to soundtrack the film. The product, a full-length record entitled New Ways: Music From the Documentary I Dream of Wires, explores the different facets and techniques of modular synthesis with both vintage gear and that of leading contemporary modular manufacturers—Modcan, Intellijel, Doepfer and Make Noise, among many, many others. Amm features plenty of these modular producers and manufacturers, as well as innovative contemporaries, throughout the documentary.
“This is a movement that’s building,” Amm says. “You want to see what it is about this technology that’s winning more and more people over, so I think that it’s useful to see someone who’s coming at it from the classic, vintage perspective. That gives you some insight as to why more and more people are getting into modular now.”
An extended director’s cut of the film, called I Dream of Wires: Hardcore Edition, lovingly follows modular obsessiveness with four hours of interview footage and a lengthy historical primer. Learn more about the project or order the hardcore edition at sciencewithsynthesizers.com. The shortened, theatrical version of I Dream of Wires will premiere in April at Moogfest 2014.