I Was Asking For It: Interview with George “Corpsegrinder” Fisher 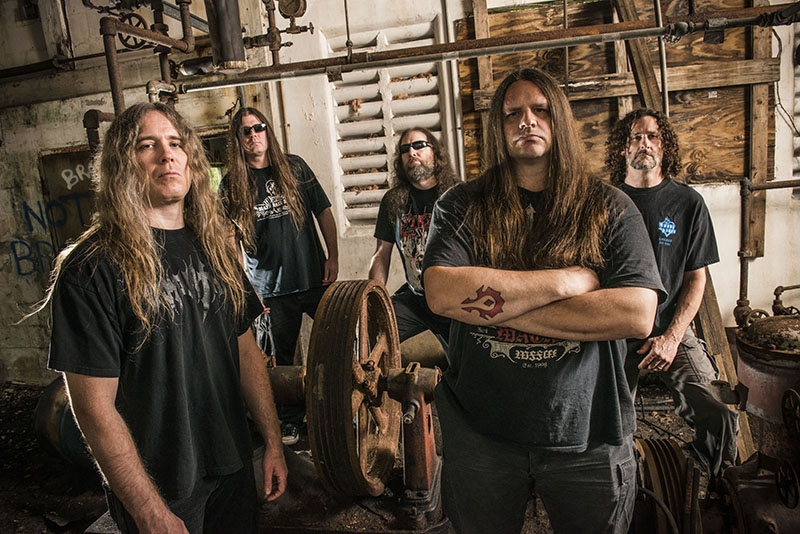 Standing in the SLUG office, my hands begin to shake as I prepare to interview a man I easily hold in higher regard than Ludwig van Beethoven, William Shakespeare and Galileo Galilei combined. Once we connect, he apologizes for a minor delay in picking up his phone: George Fisher was helping his father hang Christmas lights around the house just before this interview. It’s heartwarming to hear Mr. Fisher, a man who performs songs like “I Cum Blood” and “Fucked With A Knife” in Cannibal Corpse for a living, speak of decorating for the holidays and his fondness for watching Home Alone and A Christmas Story during the Yule season.

He has recently returned from a grueling nine-week European tour in support of Cannibal Corpse’s new album, A Skeletal Domain, which hit shelves on Sept. 16 of last year. Regarding his role in the recording process of the album, most of it was done without prior practice or knowledge of what was in store. “One thing is, I hadn’t really heard the songs too much by the time that I [had to record] vocals. I only had [heard] one or two songs that those guys had sent me,” he says. “The vocal patterns and stuff, a lot of them I was learning while we were in the studio.” This comes as a shock, considering his surgically precise vocal execution on the album. This isn’t the first time he’s had to do this kind of last-minute recording, though. One example he mentions is when the band was recording “Pounded Into Dust” from their 1999 release, Bloodthirst, where bassist Alex Webster had “whispered” the way the song should go to Fisher, who, in turn, ground out the vocals that same day.

As he describes the European tour he has just returned from, there is a contrasting mixture of emotions in his voice. Like most tours, this one had its ups and downs, but the downs this time around were especially disappointing and frustrating. “The shows we got to play were great and the shows we didn’t … it sucked,” he says. The ones that sucked particularly hard were in Russia, where a couple of dates were canceled. At one venue, the power was (supposedly) shut off right before they were about to perform. “Once they knew for sure that we weren’t playing, the power mysteriously came back on,” he says. At another Russian show, they were in the middle of a set and were told to stop playing out of the blue. “It was heartbreaking, you know—there [were] a couple of places where people were coming up who were literally in tears,” he says, “and that’s when you start to get angry about the situation.” Being a band that deeply and genuinely appreciates their fanbase, Cannibal Corpse exchanged hugs and hung out with those who were unable to see the performances. “We figured the least we could do was stick around and sign some stuff since [our fans there] couldn’t see the shows, says Fisher”

Fisher and the band are, at heart, upstanding individuals—well-meaning folks who have families, friends and hobbies. One interest Fisher and I share is a deep obsession of video games. “I have a Playstation 2; I have a Playstation; I have a Gamecube; I’ve got a Sega Genesis; Atari; I’ve got a bunch of old systems,” he says. He enthusiastically tells me a story about playing Might and Magic back in the day, spending hours on end trying to get the best character stats and leveling up. “I broke out my Playstation 2 and was going through Final Fantasy 8 again because I love the Final Fantasy games.” However, not long ago, he discovered his true calling in the world of electronic gaming. He recalls that when Final Fantasy 11 was just about to come out, his friends had been urging him to play World of Warcraft. “I was like, ‘Fuck off—I’m playing Final Fantasy,’” he says. At the suggestion of his buddies, he gave the game a try and experienced something that changed his life forever. Now Fisher likes really, really fucking loves World of Warcraft—he even got a WoW tattoo on his forearm to eternally solidify his allegiance to the game. He says that, once he upgrades his computer to get the newest expansion running smoothly, “outside of the family, any spare time is going to be dedicated to Warcraft.” He proclaims: “I’m Warcraft for life.”

Because Cannibal Corpse will be returning to our salty city on Feb. 5, I ask if he remembers anything that makes SLC stand out. Fisher laughs as he recounts making a stop here on a tour with Angelcorpse and seeing the marquee outside misspelling it “Angel Cops.” He appreciates the Gateway Mall being in the vicinity of venues Cannibal Corpse has played in the past. “Some places [we play] are just in the middle of nowhere, and you’re just kind of stuck in the bus or the club,” he says. “It gives you something to do, somewhere to walk around.”

So what can we expect from the upcoming show with Behemoth? “Some head-banging, some growling,” he says. “We’ll be playing some songs off of A Skeletal Domain … a bunch of the old classics too, of course.”

And that’s pretty much everything one could ever want from a Cannibal Corpse show. Cannibal Corpse will be co-headlining with the almighty Behemoth at The Complex on Feb. 5 with supporters Aeon and Tribulation, a show to be missed only by the unenlightened and those who experience allergic reactions to pure, unadulterated (un)righteousness. Check out their official site at cannibalcorpse.net or their band page at Metal Blade Records at metalblade.com/us.