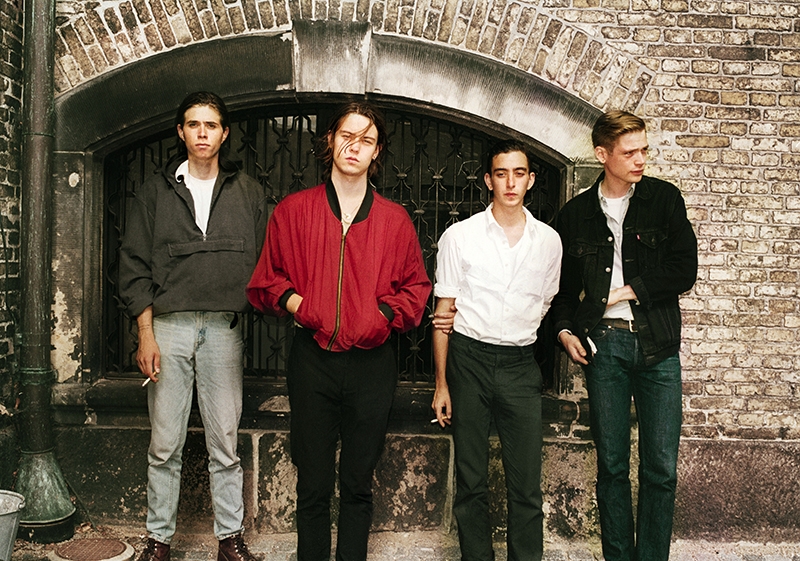 After two albums of the kind of scorched-earth, blackened punk that thrust a teenage band from Denmark into the global limelight, the savant-as-ever Iceage have finished their third and most accomplished album yet. Plowing Into The Field of Love is a collection of tracks that shed any of the shackles ever wrestled onto their intentions as a band. Iceage bring their visionary act to Utah for the first time at Kilby Court on Oct. 27.

Iceage have always hewn a rough position in relation to their audience. Upon the release of their debut album, New Brigade, in 2011, the Danish youths were heralded as saviors of punk, seen as injecting a youthful focus into a diversified global culture then littered with lifer reunions and Tumblr-ified death rockers. Their follow-up, You’re Nothing, brought much of the same breakneck-speed and manic punk vigor of their debut, as well as a media-spun controversy surrounding their use of classic fascist aesthetics and a cold approach to interviews. While their profile as a young, determined band caught them in the crosshairs of anyone commenting on the state of music in this decade, both albums hinted at a stifled underbelly of dismantled beauty.

For all the hardened, hardcore-envisioned post-punk that the band has been making, they’ve insisted that the aforementioned labels don’t matter to them. “It isn’t really for us to worry about if audiences and the media respect or appreciate our intentions,” says Iceage bassist Jakob Tvilling Pless. “Our intention is to make music that we like and put it out there. What people get out of it is up to them.” According to vocalist Elias Bender Rønnenfelt, the band’s music is “an extension of the individuals behind it. We don’t strive to do ‘post-punk.’ The music just comes out like this,” he says.

Plowing Into The Field of Love, which, according to Pless, the band recorded at a farmhouse “isolated in a forest” in Northern Sweden, finds the band trading in their hostile punk aggression for a more diverse set of sounds. The first outgrowth of the album released into the world, “The Lord’s Favorite,” and its accompanying video, mark the starkest difference in Iceage’s tone so far. With what can only be described as an up-tempo, Johnny Cash–meets–Bo Diddley country tune, the track reveals a lighter, limber vision of the hardened punk band.

Distorted Americana influences have a storied history of creeping into punk, so it’s not hard to see Iceage exploring a crooked country song. “[The song] is kind of a play on the aesthetics and imagery that lies in country music,” Rønnenfelt says. “When I started out writing the song, I was trying to write a love song. Later in the process, I realized that what I was writing was a country song. Then I started filtering it through this vision of god and megalomania.”

The video for “The Lord’s Favorite” expands on the group’s flippant sense of humor, previously only hinted at in their dry, anti-interviews. “We made it in an afternoon with our friend Cali Dewitt,” says Rønnenfelt. “My idea was that I wanted to lip-sync because it seems like a kind of a no-no for a band like us to do.” The video features Rønnenfelt lip-synching alongside a cast of characters romping around in what he calls, “Hungarian crime boss swank.”

Lest you think that the group has swerved wholly into brighter territory, Rønnenfelt maintains that the album isn’t one-note, stark bleakness or merry punk—the tracks reveal poise and variety. “On My Fingers,” the album’s opening track, establishes the same combustible energy of earlier Iceage songs, but is restrained by a more exacting approach to songwriting. It features a marching drum-and-bass beat and piano that marks the song as a lilting march, while a buzz saw guitar and Rønnenfelt’s gravelly drawl hints at the coming uncertainty. One track, “How Many,” might have found a place on You’re Nothing; the next, “Glassy Eyed, Dormant and Veiled,” sunders in with a pent-up dirge that has Johnny Marr–style, Meat is Murder–era guitar textures and horn passages. “Simony” wrenches guitars from a young Sonic Youth while Rønnenfelt swoops overhead with a droll, Kim Gordon–esque mumble that sharpens as the track progresses.

“In my opinion, it’s possibly the darkest [album] yet,” Rønnenfelt says. “It’s all about self-denial, fantasy and artificial bliss and self-confidence, looking for love, not being able.” Even as the band relents its antagonistic posture on tracks like “The Lord’s Favorite,” or the playful, mandolin-riffing “Abundant Living,” Rønnenfelt encases listeners’ experiences with unease. “The effect I wanted to portray on some of the more joyous-sounding songs is that of walking on stilts,” he says. “You’re way up there, but you’re extremely easy to knock over—everyone can see your Achilles’ heel.”

Plowing Into The Field of Love drops on Oct. 7 via Matador in the U.S. Be sure to catch Iceage’s ferocious live show at Kilby Court on Oct. 27.