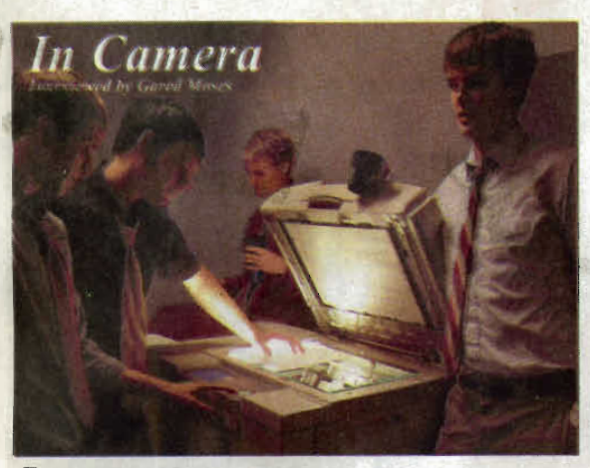 “Reverse cowgirl indie-rock with a cigarette after;” said In Camera when asked to describe themselves. Six months together, this group of musicians are all barely 21, all live in the same house, and all work for the same employer. They’ve successfully toured once and have a lot of humorous drunk stories to go along with it. Two of the members are twin brothers, the third doesn’t really say too much, and the fourth one talks more then the other three put together

I met with them one fine evening at their house, where I set out a tape recorder on the coffee table to promote easy conversation. They say they all live and work together in order to stay on the same page. I told them their house looked nice because it appeared to be well kept. Not like a band house at all. The walls were white, the furniture looked as though it may have been purchased at RC Willey, and it was all quite clean. I knew there had to be some dirt hidden somewhere, so I asked about the road.

“Tour’s so blurry,” Burn (drums) proclaimed. “Peter’s a lightweight, he was making out with a girl and out of nowhere he just passed out and fell in the bath tub. Instead of wondering what was wrong, Chris put shaving cream all over him and shaved him.”

“Then he turned on the shower,” Nic (guitar/vox) added. Peter (bass) and Chris (lead guitar, backups) are twins.

“Everyone from out of state thinks that because of where we’re from, it means we’re Mormon wussies. So it was like beer Olympics everywhere we went. We’re used to binge drinking watered-down beer, so we’d drink twice as much,” Chris explained. “We made enough money on tour to buy a washer, dryer and fridge for our house,” Peter boasted.

Their take on the local scene: “Salt Lake’s scene is really original. We played with some of the big local bands in other states. They just can’t hold a candle to Salt Lake.” Peter does most the promotions and booking for the band and says they do well because they don’t just set up shows, they do show trades with other bands to boost the turnouts.

If you’d like to get a hold of their five-song EP or watch their well-articulated live set, join them at Todd’s Bar & Grill on Friday, Nov. 12. If you’re under 21, you can catch them at Kilby Court on Thursday, Nov. 18.