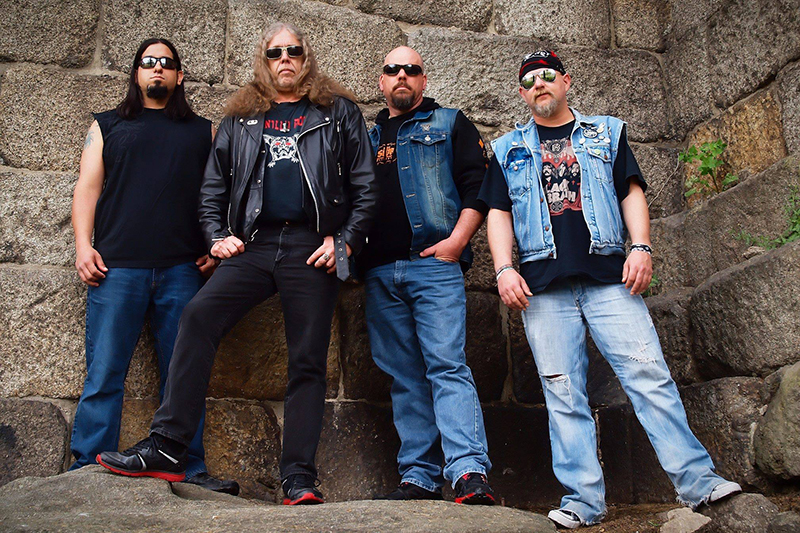 In Search of the Lost Chord: Mark Shelton of Manilla Road

Few metal bands command the kind of unquestioning respect and reverence that Manilla Road have so thoroughly earned through their almost 40-year career. Formed in Wichita, Kansas in 1977, this band endures as an icon of true underground heavy metal in America, and not merely because of their longevity. Mark Shelton and company have continued to innovate at every point of their career, pushing boundaries with each new release while still delivering an essential Manilla Road sound. They bring death by the hammer on tour after tour, unceasing in their quest to bring forth the true essence of heavy metal music.

When Shelton talks, he does so with a warm grin on his face. There’s a distant look in his eye when he recounts his earliest memories as a musician. “I started out as a pianist when I was really young,” he says. “My mom was a music teacher, so I was sat down at the piano when I was 4 or 5 years old.” Though much of his early instruction on the subject was in traditional, classical forms of music, he began to feel that primal urge to rebel against those expectations. “I felt like I was being forced into it, so I decided, ‘I’m going to do something that you’re going to hate,’” he says. “The thing is, my mom went along with it.” So began Shelton’s quest for a unique territory in music to explore.

However, his love and concept for heavy metal music began with literature. “My stepbrothers handed me stuff like [J.R.R.] Tolkien and especially [Robert E.] Howard,” he says. “I ended up reading [the] whole collection of Conan stories, and I was like, ‘Shit. This is so good, I’ve got to go buy these myself and read them again.’” Over time, his exposure to fantasy and sci-fi would lead him to new authors, but he remembers Howard’s Conan The Barbarian stories most fondly.  “In my mind, [Conan] was the greatest adventure/fantasy hero that anybody ever invented,” he says. “That’s all due to Howard making him real to me. I love [H.P.] Lovecraft, but Howard was more physically oriented in his writing style. It was more down to earth.”

In fact, Howard’s fantastical stories often find their way into Shelton’s lyrics, from Conan’s exploits in the unforgettable opening track of Gates Of Fire to the considerably more obscure “Fire of Ashurbanipal” off of Playground Of The Damned. Shelton is especially proud of the latter. “Try and fit that word into lyrics,” he says. “I’m telling you, that’s an effort there. I should get an award for fitting ‘Ashurbanipal’ into a rhyme.”

Though Shelton’s early influences include many notable figures from classic literature, Manilla Road’s new album, The Blessed Curse, takes on a more serious and historical perspective, arriving at the birthplace of story—Sumeria. His lyrics evoke an oft forgotten chapter of human history while simultaneously challenging those who espouse hatred along religious lines. “People don’t realize that the Bible was actually a huge amount of folklore from many different cultures compacted into one story,” he says. “I’m not trying to tell people not to believe in God or not have faith. I’m just saying, ‘Take a good look at it. Don’t just blindly believe this shit.’”

On top of its more serious themes, Shelton considers The Blessed Curse to be Manilla Road’s greatest album so far. “We worked really hard on that album,” he says. “I spent a long time really toiling over the music and trying to come up with arrangements that were super cool. … I’d sit in there for nine hours at a time in the studio, and [Derek Brubaker] would be in there just about to die because we’re just doing the same damn solo over and over until we’d construct the thing that we wanted. We were really picky with this one.”

Now that they’re on tour in support of the album, Shelton is also making plans to move forward with recording a new Hellwell record. “The band Hellwell really spawned out of the dark side of Manilla Road,” he says. “I thought it would give Manilla Road a chance to be a little bit more epic. Strangely enough, when I worked with E.C. [Hellwell], it turns out epic anyway because some of the shit off the new album’s fucking 14, 16-minute-long pieces. ‘Are you fucking kidding me? How long’s that organ solo going to be?’ This is the type of shit we argue about all the time.” He also mentioned that Randy Foxe would be recording drums on this release, which is especially exciting, given his incredible work on Open the Gates, The Deluge, Mystification, Out of the Abyss and The Courts of Chaos.

As for what to expect from Manilla Road in the future, Shelton says they’ll keep on innovating. “It’s not a formula to us,” he says. “It’s more like what’s in our hearts. From album to album, we just keep on constructing and playing music that is appealing to us.” He grins again and gets that familiar, distant look in his eye. “We just hope, by the grace of the gods or whoever, that people like it—that it’s good enough that it keeps us employed as musicians.” With that, he drives off into the night, following the road of light into the dark distance.