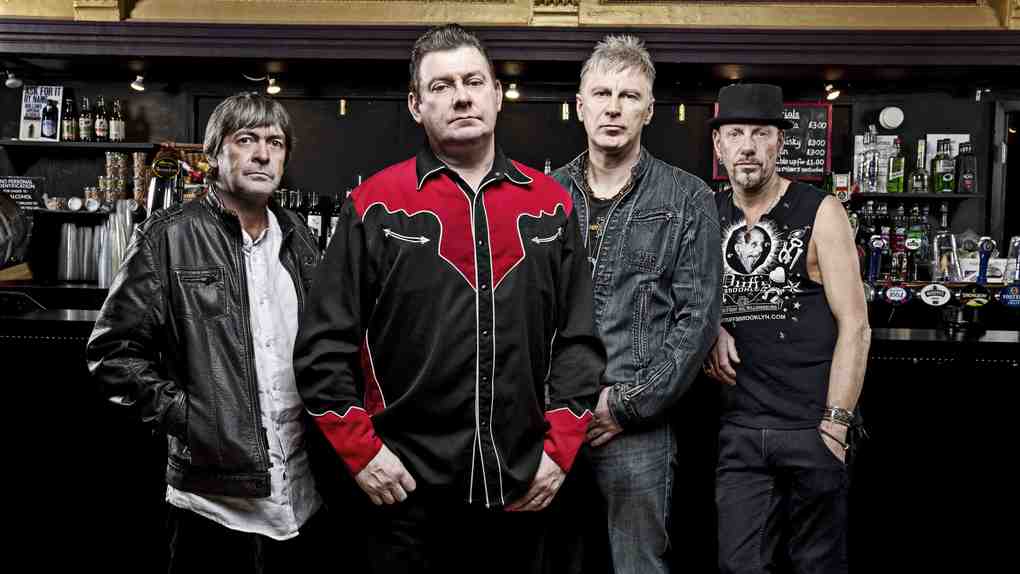 Celebrating 40 years of roots-radical anthems, Stiff Little Fingers are still going strong. In 2014, they released their 10th studio album, No Going Back, through Pledge Music, and toured alongside Bad Religion and The Offspring, with a followup solo tour in 2015. According to vocalist and guitarist Jake Burns, being a career musician isn’t quite what he thought he’d doing in 2017. At a young age, Burns was attracted to bands like Black Sabbath and Led Zeppelin—but his tastes changed. “I grew tired of that once I realized the guitar wasn’t just for showing off,” Burns says. “The main reason I picked up a guitar in the first place was thanks to an Irish guitar player called Rory Gallagher, who at the time was spoken about in the same breath as Eric Clapton.”

As the first wave of punk emerged in the U.K., Burns was not easily swayed by the cartoonish swagger of The Ramones or The Damned or the outrageous behavior of The Sex Pistols. Burns says, “I saw it as short sharp shock to the music business which I thought was long overdue.” His music tastes remained resolute with songwriters who boasted a certain social conscience with their work. “I didn’t see any of that in punk rock,” says Burns, “until I heard The Clash—and once I heard The Clash, all bets were off. I heard these guys singing songs about their lives … and what little expectation they had. They were rightly angry about it and wanted to change it, and this was the way they were going to change it: through music.”

At the time, one in 10 were unemployed in the United Kingdom, and many were faced with grim future prospects. Songs like The Clash’s “Career Opportunities” spoke to Burns, as it described everyday realities faced by these youth. Thanks to this kind of inspiration, Burns saw a future in punk beyond simple teenage outrage. “It seemed very liberating,” says Burns.

For Stiff Little Fingers, the troubles of Northern Ireland provided a backdrop to writing material. Their manager, Gordon Oglive, helped push this along. Burns says, “It sometimes takes an outsider to come and say to you, ‘You do realize this is actually happening.’” In 1978, Stiff Little Fingers recorded the singles “Suspect Device / Wasted Life” and “Alternative Ulster / ’78 Revolutions A Minute” that were released through Rigid Digits and Rough Trade. Later in 1979, they released their first full-length album, Inflammable Material—also released through Rough Trade.

Stiff Little Fingers remain an influential group from the first wave of punk. Although their songs didn’t necessarily overthrow any fascist regimes, their songs about life during times of struggle continue to be relatable. “I don’t know how much of a threat a rock band can possibly be,” Burns says. “I’m certainly not naïve enough to think to you can change the world with a record, but I think you can make people stop and think.” During the Lebanon hostage crisis, Stiff Little Fingers rallied behind British journalist John McCarthy. McCarthy was held in Lebanon for five years, as the Thatcher government would not negotiate with the hostage takers.

Around this time, Stiff Little Fingers recorded “Beirut Moon”—released later on the 1991 The Flags and Emblems—and even offered to have the proceeds of the song help fund the “Friends of John McCarthy” group actively campaigning for his release. According to Burns, the involvement of Stiff Little Fingers helped raised the importance of McCarthy’s case in the eyes of the British public. At one point, Burns was invited to talk on a news program opposite Tory Defense Minister Sir John Nott. “He refused to meet with me on the program,” says Burns. “He wouldn’t do it.”

Unfortunately, while punk was once home to a diverse array of bands and musical styles found with the likes of The Clash, Talking Heads, Blondie or even Elvis Costello, Burns now finds that the genre’s application is shallower today. Speaking of the afore mentioned bands, he says, “None of them would be considered a punk rock band by the criteria of today.” According to Burn’s observations, punks are now required to look a certain way, utilizing the right accessories. He also notes that many bands tend to favor singing about fighting, drinking and screwing. He adds, “These days, it’s become very narrow. It tends to be four usually white guys with guitars making as much noise as possible.”

This being said, Burns offers some insight to up and coming groups. “Write what you believe in,” says Burns. “If you are to … be a musician in your own right, then you really have to find your own voice. By that, I mean it’s very well that your favorite band in the world is Stiff Little Fingers, but don’t become Stiff Little Fingers Part Two, because that’s not going to get you anywhere.”

Stiff Little Fingers are playing Metro Music Hall on Friday, Sept. 15 with Death By Unga Bunga. Doors are at 8 p.m., and music starts at 9 p.m.