00:00 / 16:39
Spotify Stitcher
RSS Feed
Share
Link
Embed
Incubated in the Pacific Coast and awakened by California sunshine, the ’80s L.A. punk scene birthed swarms of influential and notorious bands, and inspired youngsters Dave Markey and Jordan Schwartz to document the happenings in the xeroxed annals of their acclaimed fanzine, We Got Power. Recently, a compilation of photos, essays and reprints of the zine was published as the book We Got Power: Hardcore Punk Scenes from 1980s Southern California. SLUG got in touch with Markey to chat about the heady days of ’80s punk. 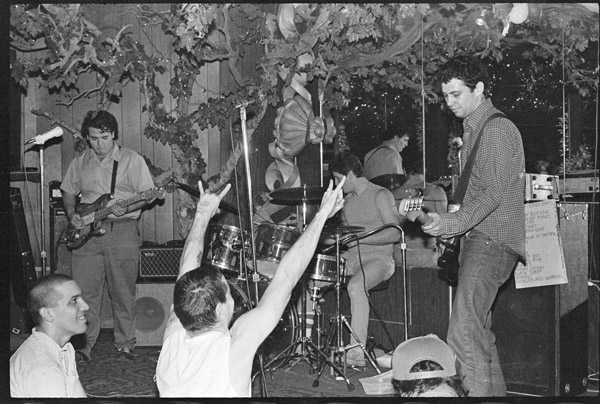 The Minutemen perform in 1982 as Earl Liberty (Saccharine Trust), Henry Rollins and Chuck Dukowski (Black Flag) look on—just one of the many amazing moments of the early LA punk scene documented by the We Got Power fanzine. Photo: Jordan Schwartz

From vegan recipes and haikus to pinko diatribes, the self-published fanzine has been the weapon of choice for niche group scenesters, punks and misfits since the whitewashed days of the Reagan administration. Incubated in the Pacific Coast and awakened by California sunshine, the ’80s L.A. punk scene birthed swarms of influential and notorious bands, and inspired youngsters Dave Markey and Jordan Schwartz to document the happenings in the xeroxed annals of their acclaimed fanzine, We Got Power. Recently, a compilation of photos, essays and full-color back issue reprints of the zine was published as the book We Got Power: Hardcore Punk Scenes from 1980s Southern California. SLUG got in touch with Markey to chat about the heady days of ’80s punk in the land of fruits and nuts.

SLUG: Describe the fanzine climate of Southern California when We Got Power was born.
Markey: We Got Power didn’t have a model to follow. There was Flipside, and Slash had become a record label. Nationally, it was fairly quiet, save for Touch and Go. The real fanzine boom of the 1980s was just about to get underway. Our zine reflected our personalities, and the humor was a natural byproduct of our aesthetic, with a goofy bent and even parody once in a while. We didn’t take ourselves too seriously—we were just kids out for fun.

SLUG: What drew you into the L.A. hardcore scene?
Markey: We were already warmed up with Devo, The Specials, The B-52’s and Talking Heads. We made cassette tapes of Rodney Bingenheimer’s KROQ radio show on weekends.  He played local underground stuff, and turned us on to many bands. The first time I heard The Minutemen and Redd Kross was on Rodney’s show. It primed us on everything from the Germs to Black Randy and The Metrosquad. There was an intense vibe at the time. Reagan had won the White House from Carter, and the laid-back, liberal vibe I grew up with in the ’70s was discarded for this gross, conservative, yuppie thing, and we weren’t having ANY of it!

SLUG: You interviewed some crucial bands and characters in the scene. Any that intimidated you?
Markey: We weren’t really intimidated by anyone. We interviewed Circle One and Suicidal Tendencies, in the height of their thing. We just sought out bands we liked and we weren’t turned away by anyone in the process. I remember being stoked to interview Black Flag and Dead Kennedys.

SLUG: The violence of the scene gets press, and in a Vice interview, you said it was mostly a media boogeyman …
Markey: The violence was around, and some ugly things went down, but, for the most part, the media really played up a sensationalistic angle for good ratings on the local news. I do remember going to my first punk show, X, The Blasters and The Gears at the Santa Monica Civic Center. It was before I’d cut my hair short, and I was verbally harassed by some H.B.s (Huntington Beach Skinheads) because of it. Still, when I sheared my long surfer hair, it wasn’t because of the name-calling. It was because I wanted to.

SLUG: Between Black Flag, Circle Jerks, the Germs, T.S.O.L., Suicidal, The Adolescents and The Minutemen, SoCal has a rich hardcore pedigree. Who were the more “unsung” SoCal hardcore bands?
Markey: For the most part, the cream did rise, but there were lots of great bands that didn’t get national or local attention sometimes. Hidden gems like the Mau-Maus, Mood Of Defiance, Rhino 39, The Zeros, Secret Hate, The Disposals, Lost Cause … I could rattle off names for days!

SLUG: There are many books chronicling regional hardcore scenes, like Dance of Days and Banned in D.C. What makes the Southern California hardcore scene in We Got Power unique?
Markey: Hardcore music more or less originated in Southern California. Take a look at this book! It’s like a Petri dish of flourishing bands coming into their own. Scenes in other cities like Boston, Detroit and D.C. seemed really fixated on L.A.  Hell, ask anyone from Ian Mackaye to Dave Grohl to Tesco Vee, all eyes were on Circle Jerks, Black Flag, the Germs, Angry Samoans and so on. These bands inspired the national hardcore scene, and I don’t think that’s an overstatement at all.

The beautiful hardcover book can be purchased from Bazillion Points Publishers at bazillionpoints.com, and features essays by Henry Rollins, Keith Morris, Chuck Dukowski, Tony Adolescent and many more, along with hundreds of first generation photos.