Along with singer Mark Olsen and bassist Doug Wright—who live in California and New York, respectively, and were not present for the interview—guitarists Jeremy Chatelain and James Holder and drummer Chad "Chubba" Smith make up Salt Lake’s first straight edge band, Insight. They were only together for a brief period, from 1988 to 1990, but were instrumental in shaping the hardcore scene in Salt Lake City. They’re reuniting for two shows this month—the band’s first reunion in nearly 25 years. 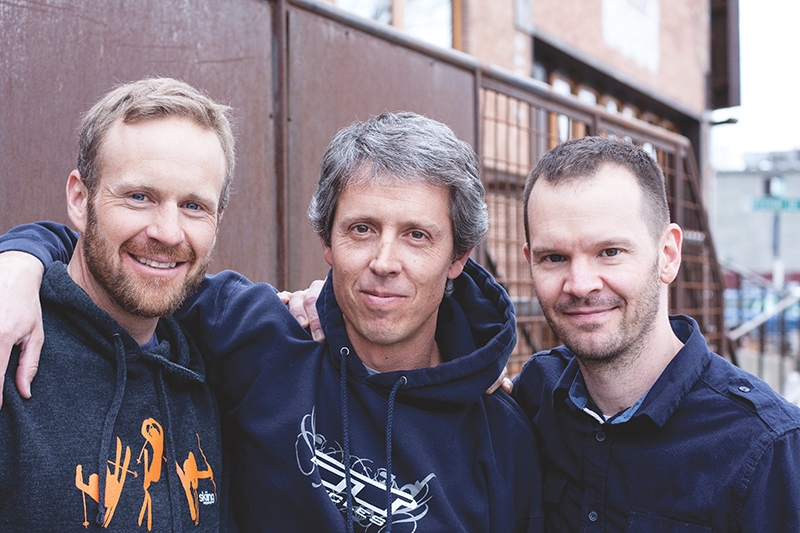 (L-R) Insight members Chad “Chubba” Smith, James Holder and Jeremy Chatelain are responsible for the birth of the Salt Lake hardcore music scene in the early ’90s, along with bandmates Mark Olsen and Doug Wright (not pictured). Photo: John Barkiple

It’s a rainy Sunday afternoon, and Jeremy Chatelain, Chad “Chubba” Smith and James Holder are sitting around a table, drinking coffee and swapping stories. The three of them are in full youth-revival mode, trying to remember details of things that happened nearly a quarter of a century ago.

“I Googled ‘Insight’ and ‘straight edge’ the other day,” says Chatelain. “There’s some old hardcore fanzine entry that comes up called ‘straight edgers are dicks.’ It goes on to list all these bands and the reasons why they’re dicks––and we’re on there.”

Smith and Holder laugh, but are a little bit shocked at the same time. Chatelain gets excited to tell the story and continues, saying, “It’s like, ‘Anybody ever heard of this stupid fucking band Insight from Utah? They came through New York City to play ABC No Rio, didn’t walk in the club until right before they played, borrowed gear from Supertouch and didn’t even stick around to watch them. Dicks.’” Smith and Holder remember the exact show in question and everything that happened that day. “We had to park our van like seven blocks away!” says Holder.

Along with singer Mark Olsen and bassist Doug Wright—who live in California and New York, respectively, and were not present for the interview—guitarists Chatelain and Holder and drummer Smith make up Salt Lake’s first straight edge band, Insight. They were only together for a brief period, from 1988 to 1990, but were instrumental in shaping the hardcore scene in Salt Lake City. They’re reuniting for two shows this month—the band’s first reunion in nearly 25 years.

The conversation keeps going, discussing the seedy parts of cities and reminiscing about being woken up from a nap by huge strangers reaching into the van at a rest stop. It’s fun to listen to, but it’s even more fun to watch old friends interact. These three are clearly enjoying each other’s company again, and even though they’ve all played in bands together since, Insight is the one that sticks out. The stories go on and the laughs continue as they talk about the band that they all cut their teeth in that gave them their first taste of something bigger than local fame.

“Fast and loud” was the mantra of Insight, and they took influence from hardcore bands of the era like Youth of Today, Minor Threat and 7 Seconds. They rapidly built a following by playing as often as they could. Shows at The Speedway Café and The Word got bigger and bigger, and their unique, crossover sound enabled them to fit with pretty much any hardcore band on the stage. “It was a thirst for volume and a thirst for playing really, really fast,” says Holder. “Our half stacks were always turned all the way up.”

Being the first outspoken straight edge band in Salt Lake, Insight were gaining popularity in the early ’90s—not just in Salt Lake City, but all over the country as well. Eventually, their debut 7”, Standing Strong, was re-released by Victory Records as What Will It Take in March of 1990, and they hit the road with lofty goals and the world at their fingertips. It was short lived, though, and the band never made it past that one, six-song EP and a handful of compilation tracks.

When Wright got married and had a kid straight out of high school, he put family first and wasn’t able to tour any longer. Real life came calling and threw a wrench in what had been a great thing. These five friends had grown up together over the course of a record and numerous tours with some of the biggest hardcore bands of the era. No one really wanted to continue on without the core members, so they decided to hang it up. They all moved on to other projects, most notably Iceburn and Handsome, broadened their musical horizons and never really looked back. Insight was done.

Last year, Revelation Records—one of the most respected record labels of the era—celebrated its 25th anniversary with three huge shows across the country. A lot of bands from its early years got back together and sent off a sweeping wave of nostalgia. For fans of hardcore, it was hard not to get caught up in it, and the Internet soon overflowed with Facebook and Twitter posts of which bands everyone would love to see back together, even for just one night.

Olsen had been playing in The Gimmicks in Seattle and later Sweet Evil in Los Angeles, touring Europe and still living the rock n’ roll life, but Insight was never all the way out of his mind. With all of the bands that they toured with back in the day reuniting and playing hardcore shows again, Chatelain feels pretty confident saying that’s what kicked Olsen into high gear trying to put together an Insight reunion. “Mark’s been bugging me about it for probably five years,” says Chatelain. “Truthfully––and no offense to any of the guys because I love them––I really wasn’t interested. I’m not sure if they were, either.”

Chatelain had a change of heart recently and felt like playing again. It wasn’t so much that he had a desire to play the songs they’d written in 1988, but that he wanted to be in a room with those guys again, playing music. He left the hard part up to Olsen: getting the other four guys to agree and finding a place to play. “Jeremy and I have been in touch ever since Insight broke up,” says Olsen. “We entertained the idea of doing this for years. I had a chance to play with the guys from Chain of Strength, Against the Wall and Excel, and it made me miss what I loved—playing hardcore with my brothers from Insight. I just put the wheels in motion and got all the guys on board.”

It was very important to everyone that if a reunion were to happen, it had to come from a genuine place. None of them wanted it to feel like a chore, and everyone that was originally in the band had to be on board. Luckily, everyone signed on, and April 12 at The Shred Shed and April 13 at Urban Lounge will be the first Insight shows since September of 1990. The hard part turned out to be easier than they all thought, and the new challenge was relearning songs that hadn’t been touched in 23 years. “That first practice, we had an iPhone sitting on the top of a Marshall half stack, and we were trying to play along,” says Holder. “It’s more complicated than I thought. I underestimated the difficulty factor.”

Playing along to recordings didn’t last long, and soon after, Smith showed up to take his place behind the kit and the songs just started flowing again. “I feel like it’s just muscle memory,” says Chatelain. “The songs stuck in my head for so long, then at some point they disappeared. The minute I started hearing them again, it was like ‘Oh yeah!’ James and I had moments in the rehearsal space where we were both just like, ‘and then it goes here, and then it goes right here.’”

With Olsen and Wright living on opposite sides of the country, the practices have been scaled down, but no one is worried. They’ve both been playing in bands and know what they’re supposed to be doing. The only thing they’re worried about is whether they can still pull off how fast the songs are supposed to be. “I feel bad for Chubbs,” says Chatelain. “It is really, really fast. We’d worked at it for years at that point, but I can’t play that fast anymore.”

The set list stands around 11 or 12 songs at this point, and no one denies that this might not be the last we hear of Insight. They all admit that they’re having a great time being back together, hanging out, swapping stories and playing music again. Chatelain reveals that he did find cassette tapes of songs that never got recorded before the band broke up, and it’s obvious that everyone is having more fun than they thought they would. “We start playing and I get pumped,” says Chatelain. “I want to just jump around, which is crazy. It’s fun to get back into that headspace.”

The hardcore scene isn’t exactly what it used to be, and bands come and go with such regularity that it’s hard to keep up, but everyone remembers the ones who put it on the map, and this is definitely one of them. To the guys in Insight, though, it’s always been more about the friendships formed and the fact that they’re able to get together more than 20 years later and it’s still the same as it ever was. “It’s been awesome,” says Chatelain. “I’d say the biggest reason for doing this is just to play music with these guys again and see what that would feel like. It’s totally selfish.”

Maybe Insight are actually dicks, after all. Catch them live on April 12 at The Shred Shed and April 13 at Urban Lounge.