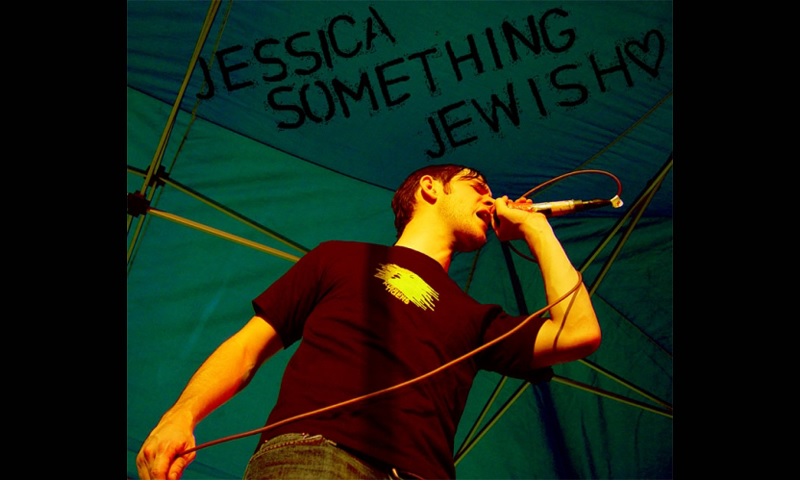 Interlocking Puzzle Pieces: Jessica Something Jewish Join Together From the Farflung Corners of Utah

All the members of Jessica Something Jewish live in completely different areas of the state, so I can’t really sum up their location in one city. James Glines(vocals/beats) lives in Bountiful. I’ve known him as a singer/songwriter for a couple years and have frequented many open mics with the guy. When I finally got the chance to see his current band, I was rather surprised, because in the past, he sang along to his acoustic guitar. Needless to say, I expected a rock band or something of that nature, but their performance at Todd’s Bar & Grill was much more closely related to dance or hip-hop, with some dreamy, dark ambience (although these descriptions don’t completely describe the band).”Electro-pop indie stuff,” James explained to me when asked to define their genre. Other than a few beats, he’s solely on the mic throughout the set, while two young, blonde females help with back-up vocals. Of course, there are instruments as well, played by very articulate musicians.

I spoke with their band outside the club in the parking lot a couple days after the show. Mandy (cello/violin/vocals) and Kaila Shell (keys/vocals) are sisters who both live in Heber, while Tristan Meek (guitar/pear-shaker) lives in St. George.

“We’re all Internet sluts … that’s how we met,” Glines told me. “It kind of helps out (for promotions) that we’re all from different locations,” Kaila explains. “We all have different groups of friends.”

James clarified that most of their following comes from the Internet. “It happens that there’s a high demand for what we’re doing, and it kind of blows up from there.”

They are an attractive band with a stage presence that could be described as charming. I even saw Glines hugging some of the people in the crowd without losing a step on the mic. They’re all quite young and have only played together for about six months, but they already have the potential for creating their own original, definitive following.

Jessica Something Jewish will be performing live on Saturday, Oct. 16 at Starry Night in Provo.