Salt Lake Americana songwriter David Williams will find himself in a different spotlight this month as the star of the dramatic film, Intro. The latest cinematic creation from director Brandon Cahoon will be one of the featured films heading into the 2012 Salt Lake City Film Festival. Cahoon had fallen in love with the idea of living with a musician and figuring out what makes them tick. Rather than do the traditional documentary style, he envisioned creating a dramatic film with Williams as the musical star. 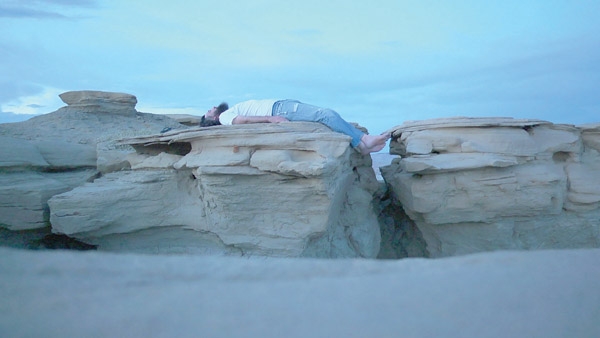 David Williams is seen at his most vulnerable and creative in his private Southeastern Utah hideaway during moments of Intro. Photo: Brandon Cahoon

Salt Lake Americana songwriter David Williams will find himself in a different spotlight this month as the star of the dramatic film, Intro. The latest cinematic creation from director Brandon Cahoon will be one of the featured films heading into the 2012 Salt Lake City Film Festival.

Intro has been about a year in the making, stemming back to when the two men first met in 2010, while Cahoon was in post-production on his first feature-length film, Parade. When looking for music to fill his soundtrack, he visited the Tin Angel Cafe on recommendation to see Williams perform live for the restaurant’s patrons. After watching his set and having a short conversation, Williams took a DVD copy home and created the soundtrack with little direction beyond having viewed the film with Cahoon a few times.

“I’d never met anyone like David before, not just in his personality, but in his very guarded world view, and his process in making music was very mysterious to me,” says Cahoon on his experience with Williams.

Still working on Parade at the time, an opportunity arose for Williams to play the Huichica Music Festival in Sonoma, Calif., prompting him to ask Cahoon to come film it for him. When Cahoon started researching the festival and sought permission to shoot the show, the idea came to him to make a film based around Williams’ performances and touring.

A fan of D.A. Pennebaker’s work (Don’t Look Back, Monterey Pop), Cahoon had fallen in love with the idea of living with a musician and figuring out what makes them tick. He got to work story-boarding narrative pieces that would help tie the performances together. Cahoon approached him with the idea just days before Williams was due to head to California for the fest, but rather than do the traditional documentary style, he envisioned creating a dramatic film with Williams as the
musical star.

“He said, ‘Look, we could totally do this documentary-style and it would be cool, or we could do a feature film and make it epic,’” says Williams. “I said I’d rather err on the side of epic.”

The short tour in early 2011 took the duo to San Francisco, Oakland and Reno, with small stops along the way, ending in Salt Lake City with a performance at The State Room. Cahoon spent most of the trip with a camera in hand, letting Williams know he was ready to go at a moment’s notice. The only footage not shot on the road was at a private location over several days in Southeastern Utah where Williams loves to vanish for writing
and getaway purposes.

Over the course of the trip, Cahoon was able to film Williams in very picturesque and candid moments, traveling on the road and even developing songs before they hit the stage. However, some of the best footage comes from his performances with Jeremi Hanson, the former Band Of Annuals singer/keyboardist who relocated to San Francisco two years ago.

“She just has a golden voice and she’s brilliant with the harmonies. It’s just a pleasure to sing and tour with her. I consider her a great friend of mine. It was wonderful,” says Williams of their
performances.

During the editing process, Cahoon had already figured out all the footage he wanted to use, and was able to put the film together rather quickly. When it came to the performances, Williams was able to guide him to the best pieces that best complemented the footage shot and made for a better live soundtrack.

“Before we had a final cut that we took to the [Torino] Festival, I’d given him two cuts that were really too long, and he was able to help me shape a better cut. He remembered when he was the most ‘on.’ He very specifically remembered certain songs in certain shows where he felt the singing or the guitar or the harmony was very good,” says Cahoon.

The film itself catches Williams at his best, and, at times, his most vulnerable—moments like standing barefoot in the water, looking out at the Pacific Ocean, busking in a subway tunnel for the people on their commute, or simply laying out in the desert at night, staring at the sky. But the moments that truly shine are those of Williams onstage, performing his heart out to the crowd, whether it be for 20 or 200 patrons at a small cafe or desert festival. Watching him pluck away quietly or strum vigorously on his weathered acoustic guitar, often with a smile on his face and a humble appreciation for those who came to watch, the film shows Williams is most at home onstage.

Prior to coming to SLC, the film’s official world premiere took place at the Torino Film Festival in Turin, Italy in November 2011, earning a nomination for Best International Documentary in the process. Intro was also selected to play at the 2012 Bradford International Film Festival in the U.K. The Salt Lake City Film Festival (Sept. 22 at The Tower Theater at 7 p.m.) will mark the film’s official debut in the States and the first time being shown in Williams’ home city—a fitting intro to those who haven’t seen Williams live, and a great compliment to one of Utah’s finest musicians.