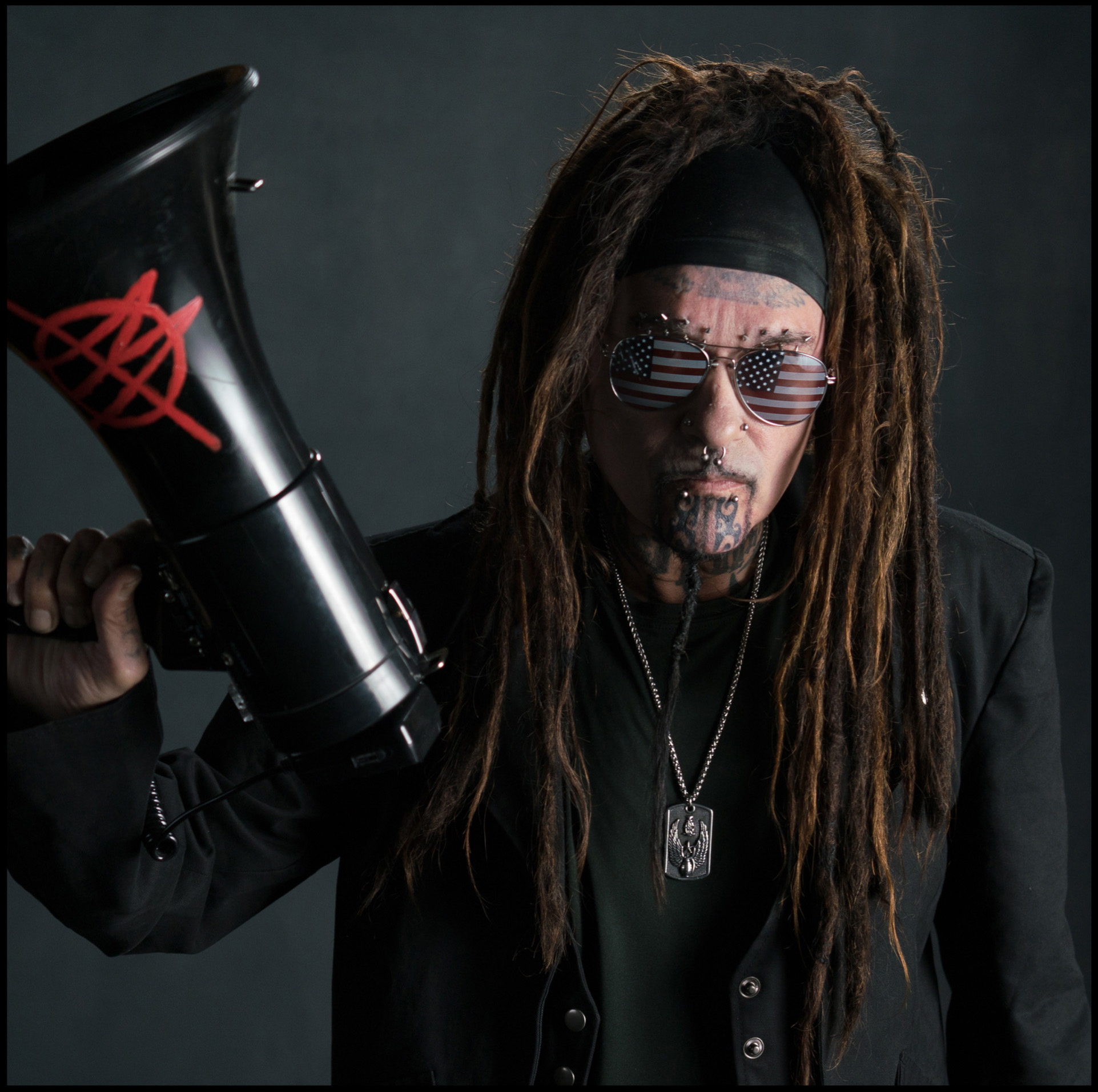 Election Day 2018: Conversing with Uncle Al, No Antics: A Call for Action

On Friday Nov. 23, the Ministry AmeriKKKant tour will be making a stop at The Depot. The mysterious French synth-wave creator Carpenter Brut will be one of the supporting acts as well as our locals, Natas Lived. SLUG had the opportunity to converse with Ministry creator and front man Al Jourgensen on Election day. We discussed the new album, Utah history and the documentary about the historical Wax Trax! Label. As Ministry is known for their strong political beliefs it came as no surprise that Jourgensen was an early voter. Jourgensen wanted to spend his election day campaigning to get people out to the poles and vote and share his political message.

The Ministry fans of Salt Lake City are dedicated and devoted to the band like family members. The people here have connected to the music through their troublesome teens, and successful adult lives. The roots of these relationships were planted into the ground early on and in 1990, at the concert that took place at The Speedway Café, the seeds began to sprout. It was almost 30 years ago and the events that took place that night have become an urban legend. Jourgensen recalls being picketed the moment the band pulled into the venue. A lot of things happened on that tour but our state stood out as people of local faith protested them just showing up to play the show. As for the other shenanigans that took place that night, Jourgensen refers to them to just another “Tuesday or a Wednesday night of the tour.” He adds, “That tour is something that cannot be replicated in this day and age—“Thank God.” He recalls that after the show, their guitarist was in a confrontation that involved police officers, but that seemed to be a reoccurring incident for this touring group of musicians. That evening was just one of fourteen consecutive shows that someone from their band or crew was arrested for something. As a matter of fact, their stage manager had a nervous breakdown after the tour as he spent more time in police stations instead of actually managing what was happening on stage. Jourgensen says, “This was a stereotypical ‘90s rock tour, a caricature of how bad things can get while on the road.” He adds, “Spinal Tap is what it was.”

The touring days of the ’90s were phenomenal and unfortunately many of the artists did not live through them due to antics, addictions and accidents. The stories we have heard through legends, books and interviews carry us through the Wax Trax! days of yore. Many great acts spread their messages of angst and creativity all over the globe and have permanently bonded with each other or damaged themselves for doing so. Jourgensen mentioned he had a great time touring with the myriad of Wax Trax! artists, but as for the band from the label he would like to tour with most The Young Gods is on the top of his list. Franz is a long time and continued friend of Jourgensen’s and The Young Gods is still his favorite band on the label. He says, “They were also so innovative and still to this day are innovative.” He adds, “Franz is directing orchestras in Switzerland, and creating beautiful music and is a very beautiful soul.”

Julia Nash, the daughter of Wax Trax! co-founder Jim Nash teamed up with former artists, influential industry minds and others to create a documentary about the revolutionary label and its history. There are many stories to be told about the events that took place at that record store in Chicago, and it is best to hear them from the artists and employees that experienced them. The Wax Trax! documentary, Industrial Accident: The Story of Wax Trax! Records is the story about how the creation of the label was seriously an accident. Jourgensen says, “We were disenfranchised, disgruntled youth trying to make our voices heard in whatever way we knew possible.” He adds, “I don’t even know if some of the things we did could even be replicated now that in the stage of corporate takeover.” He realizes that music today as is all about the bottom line. He says, “We took risks that no record label or media company would take these days because of these self-imposed norms of rules that have developed.” He adds, “We just flew by the seat of our pants, man. We just did what we could to get recording studio time to make the music.” The creation of this documentary has caused him to get back together with people he has not spoken with in 30 years. In the last few weeks, Jourgensen has spoken with Chris Connelly, Paul Barker, Groovie Mann from the band My Life With the Thrill Kill Kult and the producers of the film. Petty beefs and youthful ignorance, immaturity and energy boundaries have been overcome. The living members of The Wax Trax! family have been reunited to create music and their fans could not be happier. One thing is for sure, when it comes to music and debauchery, anything could happen when it comes to this great industrial record label.

Jourgensen turned 60 in October and he is showing no signs of slowing down. As a matter of fact, he has the longevity, respect and experience of his career but feels as if he is just getting started. He is in the best health of his life, and says he has been converted to a half-glass-full person, from a half-glass-empty person. In these trying political times he sees hope in the activism and the passion that people have. They are not only taking action on their civic duty but their sociological duty to help one another. “He says, “I see compassion where I used to see apathy.” He thinks that we are in the beginning stages of something cool. He experienced something similar when he was a mere 10 or 11-years-old in the late ’60s. However, he has noticed it is also reminiscent of the 1930s in Europe with the rise of fascism and nationalism and nativism. He heeds warning as the attitudes also have changed for the worse. He feels people have become less caring about those in their communities and instead if borrowing a cup of sugar from their neighbors, they are afraid of them. He also sees a pushback that he has not seen since the late ’60s. He coins the phrase “cautiously optimistic.”

The title of the release AmeriKKKant, like most Ministry titles, stays true to the tongue-in-cheek style releases, although this is more on the morbid tone. It is evident that this is about the rise of the right wing. The events that are taking place right now in the political systems are very similar to those took place before World War II. Jourgensen feels that countries like Hungary, Austria, Brazil, the Philippines, and those countries that have emperors for life like Russia and China have transformed from fascist dictatorships and have been turned into kleptocracy. He defines it as, “One person and his band of merry industrialists gets to rape the country of its resources—with devil may care because their lives are great,” He feels that dictatorship is a misnomer and that we are headed towards kleptocracies all over the globe. “It is a cause for alarm and a signal for trouble ahead,” He says. Jourgensen is glad to see an organized resistance going up against this, and says, “this is the necessary reaction.” He quotes Isaac Newton, “For every action there is an equal and opposite reaction.” He is pleased to see the resistance. Jourgensen is just hoping that this concentrated, organized resistance toward the powers that be doesn’t end up like the ’60s. He says, “The political marches and activism now were equally as fervent and passionate in its resistance against Nixon and the Vietnam war.” He remains optimistic that it does not turn into a fashion trend. He says, “When you think of the ’60s now, you think of long hair, LSD and bell bottoms and you do not realize the gains that were made were really cosmetic and superficial.” He adds, “Yes, we had a voting right act and Jim Crowe was defeated above ground but then they went underground, mobilized and resisted against the resistance.” He feels that the ’60s were put into a footnote of bell bottoms, acid and concerts and that is unfortunate. The events that are taking place now are just as turbulent and points out that history keeps repeating itself. He refers to himself as the Chicken Little of industrial music, as he keeps sounding the alarm about the sky falling. Yet, he does not want to be seen as the boy who cried wolf as these problems are real. In fairy tale folk lore, there is always a message of truth. He says, “I hate to sound like a hippy but you need to raise your child like a village would raise it.” He adds, “We have to think about our neighbors and the consequences our actions within a society.”

This community call to Arms made me think of the AmeriKKKant track ‘Victims of a Clown’, that samples Charlie Chaplin’s controversial speech ‘The Great Dictator’ He says, “It is a very ’60s inspired track and the original N.W.A. DJ, Arabian Prince was very instrumentally crucial in the vibe of the track.” He adds, “It really did bring things together, having people from very different cultural upbringings making a song about uniting—he thought it was powerful.” There are many different cultural backgrounds on this release. For instance, the cellist that plays on AmeriKKKant was discovered by Jourgensen one day while strolling through a Los Angeles flea market shortly after Trump was elected. This older musician was busking and playing his beautiful song for financial help on the streets. Jourgensen envisioned Nero fiddling while Rome burnt when he saw The Lord of the Cello for the first time. A little more interaction and it was discovered that this busker was a former MIT professor, that was just down on is luck and busking to get by. Jourgensen says, “This album was very organic with the people that are affiliated on it and the things that we did on this record.” He adds, “The message was cohesive from all parties involved.”

As for Jourgensen’s current musical taste he is listening to various countries indigenous music and their instruments. He wonders what prompted the music style to become so popular, why the style of music took root in the culture. He also contemplates why certain instruments took to the forefront of their regions. He loves exploring why the myriad of instruments range from culture to culture, how they are created and why they are so predominant. For example, why does a guitar make metal, metal? He asks that all of us take a look into the reasoning. He says that music from India fascinates him as well, and he just met a sitar player at the same flea market where he met the busker Lord of the Cello. It is no surprise that we could expect to hear a bunch of sitar on the next Ministry release. He likes to meet people from various backgrounds and incorporate their work into the things that Ministry does. He says, “I am all about uniting cultures.”

You do not want to miss this opportunity to see this legendary band as they are not only going to be performing tracks from AmeriKKKAnt, but are going to be celebrating the 30-year anniversary of the release of ‘The Land of Rape and Honey’ and other classic tracks. Get there early to find parking and check out locals Natas Lived and French Carpenter Brute. Tickets are available on Smithstix. (The Depot: 11.23)