Three years ago, Wiley, Mindy Gledhill, Courtney Kendrick and Justin Hackworth sat in a meeting with the town’s Cultural Awareness Committee to discuss how they could make downtown Provo more vibrant. The result is The Rooftop Concert Series, thrown on the first Friday of the month from May to October on a parking garage. “It’s unique. It’s the only rooftop concert we know of. It’s also really beautiful—you have the backdrop of the mountains behind it all,” says Hackworth.

It’s a Short Way to the Top: The Rooftop Concert Series 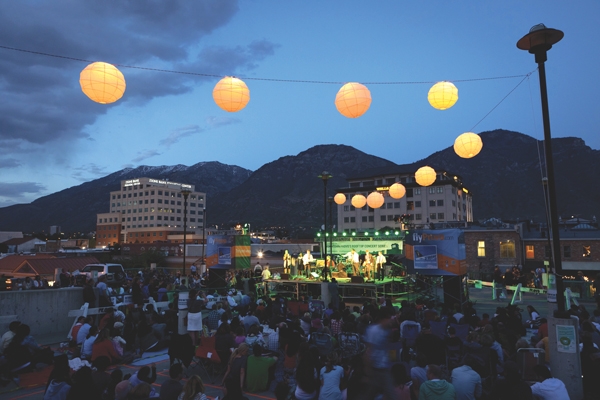 Provo kicked off its third annual Rooftop Concert Series in May, with monthly shows planned through October. Photo: Brent Rowland

I have an arguable yet authentic fear of heights. I was reminded of it when I attended the Rooftop Concert Series in Provo, which, as the name blatantly suggests, is on a rooftop. I imagined a raucous metal show atop a narrow skyscraper and a headbanging-frenzied crowd escalating beyond control to the point of falling off the sides of the roof and into the busy traffic below. Mayhem ensues.

Upon arriving, my fears were assuaged. The Rooftop Concert Series is thrown on the first Friday of the month from May to October on a parking garage, which is, realistically, only two-and-a-half stories high.  The headliner was Peter Breinholt. Peter Breinholt does not play metal. He plays soft folk, so any raucous headbanging was existentially debilitating.

At first, I suspected that I was the patsy in an extremely elaborate ruse sprung by SLUG’s editors. Breinholt’s following are more prone to read Reader’s Digest than SLUG, but the series lineup is more than diverse. Breinholt’s family-friendly folk may have kicked off the summer, but he’s sharing this season with Desert Noises, Isaac Russell, Book on Tapeworm, Fictionist, The Lower Lights and a Tom Petty tribute band.

This is the first year I’ve heard of the event. I saw little to no advertising in the days leading up to it, but the surface of this modest parking garage was practically half full an hour before it officially started. Event organizer Sarah Wiley looked impressed, but not surprised. “It’s just grown,” says Wiley. “It’s much bigger this year. We have a bigger crowd, bigger stage and bigger lights.”

Three years ago, Wiley, Mindy Gledhill, Courtney Kendrick and Justin Hackworth sat in a meeting with the town’s Cultural Awareness Committee to discuss how they could make downtown Provo more vibrant. “I don’t think any of us knew when we first met that we were going to start this concert series,” says Gledhill.

Being the home of Brigham Young University and having a rampant religious predominance, Provo isn’t exactly a place most people find to be synonymous with rock or art (despite what one would aesthetically interpret from Norman Rockwell)—some critics deny the legitimacy of Provo’s music scene altogether. “I think we were all tired of that,” says Gledhill. “A lot of people pin us to be so vanilla—I, for one, did. That’s why I wanted to get involved with it.” This year, the concert is triple the size of the first year it was created, and the organizers’ mailboxes are chock full of messages from bands interested in playing. The Rooftop Concert Series might only be in its third year, but it is organized and attended as if it were a decade-long tradition.

The last Provo-hosted music festival that’s within the spectrum of the Rooftop Concert Series was the Sego Festival, which was started by Matt Paulos (current guitarist for The Future of the Ghost) and went extinct in 2008.  While the RCS and Sego Festival have both drawn similar crowds and featured Utah-grown bands, the RCS’ vision and end goal are less based on promoting the small town’s music scene. “We’re inspired by anyone doing festival events in Provo, but our format is different,” says Wiley. “What we have is a little broader in scope. It bridges different populations while maintaining a common quality so that people can feel comfortable and confident enough to come regardless of who’s playing … Music is almost incidental. We’re just looking for someone who’ll represent us well and put on a great show, someone who’s entertaining.”

Despite the organizers’ desire to create an event with the sole intention of celebrating itself instead of the music it showcases, they can’t disregard the fact that they may get a much bigger crowd than they originally bargained for. Both loyal fan and penniless drifter factions are typically unpredictable. The RCS got a brief taste of the chaos it could create during last year’s festival. “We had a few thousand people up there for Imagine Dragons,” says Wiley.  “After we saw how Imagine Dragons went, we were almost grateful that Neon Trees backed out of last year’s lineup. It would’ve been crazier than we could imagine.” Moreover, RCS also voiced a desire to bring in slightly more prolific touring acts in the future seasons, if funding permitted. This would possibly make the RCS a near reciprocal of Salt Lake’s Twilight Concert Series, crowd-wise, but the RCS remains tenacious about keeping the parking structure.

“It’s unique. It’s the only rooftop concert we know of. It’s also really beautiful—you have the backdrop of the mountains behind it all. Everyone has been to a concert in a park,” says Hackworth.

It’s sensible how the Rooftop Concert Series has endured unexpected success despite only being a newborn event. For a concert series that goes against the grain of its environment and its relative economy, it’s thriving astonishingly. Physically, the rooftop is only as tall as a Walmart to the organizers. Figuratively, the sky’s the limit.