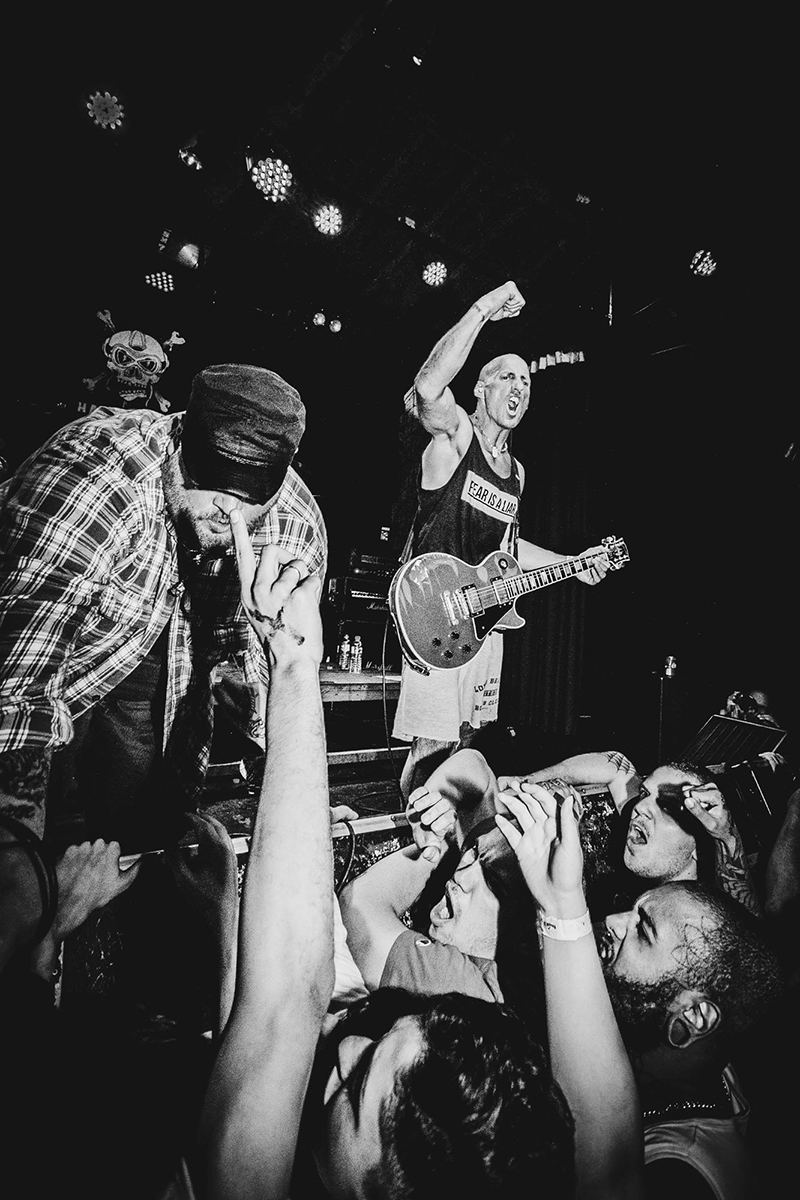 Not many people can say that they’ve played much of a part in helping shape a worldwide movement. Even fewer can say they’ve played as large a part in shaping a movement as John Porcelly (more widely known as Porcell to friends and fans) has with his role in spreading the message of straightedge to the world. A veteran of all things edge, hardcore and punk rock, Porcell is an extremely intelligent, respectful and personable individual—exactly what one might expect of a person who has brought as much positivity and light to underground scenes and movements that most outsiders view with derision and scorn. An accomplished musician, yogi and spokesperson for all things positive, Porcell’s (arguably) most infamous band, Judge, returns to Salt Lake City for the first time in roughly 30 years, set on bringin’ it down as only they know how.

Due to space constraints, it’s impossible to sum up the effect that Judge—as well as other bands that Porcell has played (or currently plays) with, such as Youth of Today and Shelter (not to mention bands he’s had stints in, like Gorilla Biscuits and Bold)—have had on hardcore and the straightedge movement, but I would venture a guess that anyone even remotely familiar with hardcore would namedrop at least one of the aforementioned bands as an influence, were they to be asked. Case in point: Porcell runs a T-shirt printing company called, fittingly, “True ’Til Death,” and he posted a query on the company’s social media page not too long ago. He requested that anyone with the iconic “Judge Hammers” band logo tattooed on them send him pictures of them. “I literally got hundreds and hundreds of pictures sent to me,” he says. “It’s amazing to me, not to mention extremely humbling, the kind of effect the Judge has had on people … The band struck a chord with people enough to get the Judge Hammers tattooed on them.” 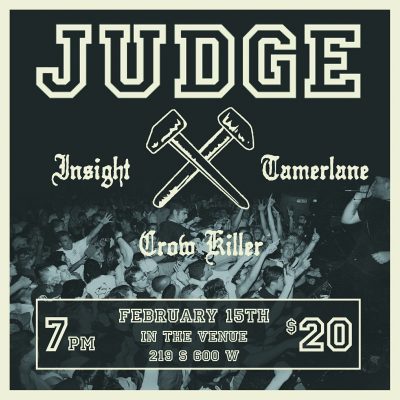 Judge technically ceased to be a working band in the early 1990s but returned to play two sold-out shows at the Black N’ Blue Festival in New York City in 2013. Most of the shows Judge played during their initial existence were to relatively small crowds, in even smaller clubs or VFW halls, according to Porcell. “Back in the day, if Judge played to 200 kids, we’d be, like, ‘Oh, my God! This is an incredible show!” he says. It stands to reason, therefore, that when the band was offered opening festival slots on two back-to-back shows in a club with a 1,500-person capacity, Porcell wondered just how in the hell the promoter was going to be able to sell enough tickets. When both shows sold out in an hour, Porcell admits to being taken aback. “It blew my mind to think that we were way bigger now, after not having been a band for so long, than we were when we actually were a band.” As far as  it coming to pass that Judge was booked to play in Salt Lake, “We actually have a booking agent,” he says, “so we weren’t contacted about playing only in Salt Lake. We’re doing four shows this stretch—Salt Lake, then Denver, then San Francisco and finally Seattle.” The initial run of tickets for the Salt Lake show sold out in less than four hours, causing it to be moved to a larger venue. As evidenced, this fact isn’t lost on Porcell. He and the rest of the band are well aware of how excited the city is to have them back here after being away for so long.

Concerning Judge’s current status—is it a full-time working band or is it just a here-and-there kind of thing?—he says that they’re no longer hungry 20-year-olds. “We’ve already done that,” he says. “We don’t really have any plans. Our booking agent calls us up and says, ‘Hey, we got this show offer—do you want to play it?’ and we usually always say, ‘Yes!’” According to Porcell, nobody ever thought Judge would do any reunion shows, let alone continue playing shows all across North America, as well as Europe and South America. “As long as I can stand up, I’ll probably still be doing this,” Porcell says. That begs the question, then: When he was a hungry 20-year-old, did he think that he’d still be doing this—playing live music, touring and affecting people worldwide—30-plus-years down the road? “No. Way.” Is his emphatic response. “I thought, like, by the time I’m 25, I’m probably gonna wrap this up.”

Though Judge was and still is predominantly labeled a straightedge band, Porcell says Judge are welcoming to anyone and everyone who identifies with punk rock or hardcore in any way. “It’s cool,” he says. “I love knowing that all types of people can come together, knowing that none of us like what has been spoon-fed to us through the mainstream. It doesn’t matter if you’re straightedge or not—if you’re into punk rock and hardcore, a Judge show is for you.”

After I thank Porcell for his time and generosity, he leaves us with the following sentiment: “To all the young kids out there, go vegetarian. Go vegan. You’ll change the world.” There you have it, kids. Judge—John Porcelly, Mike Judge, Sammy Siegler, Charlie Garriga and Matt Pincus—hit Salt Lake at In The Venue on Thursday, Feb. 15. Come get your Valentine’s Day bangover on.