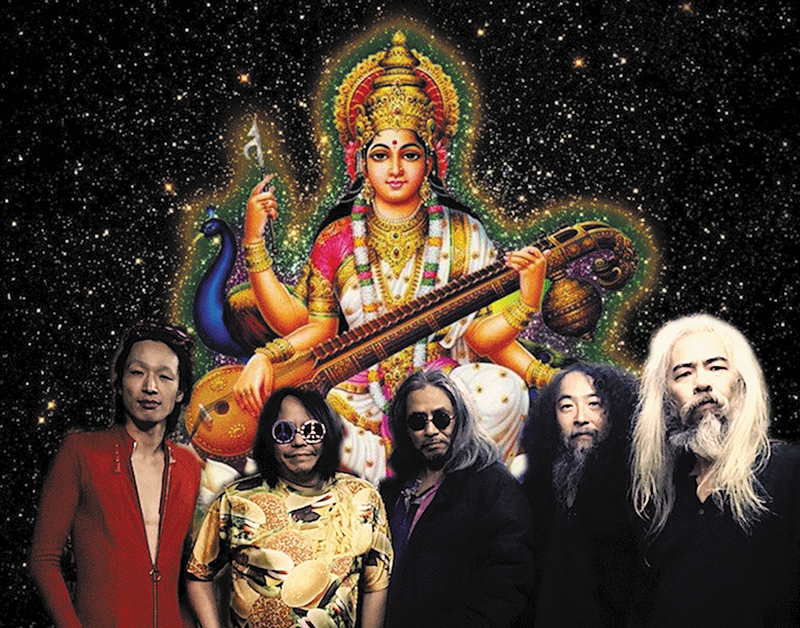 Just Another Man From The Cosmic Inferno: Kawabata Makoto of Acid Mothers Temple

Over 20 years, 72 full-length albums and countless tours throughout the world, Japanese music collective Acid Mothers Temple have produced some of the world’s most fascinatingly weird tunes. The collective operates under a variety of different names, from Acid Mothers Temple & The Melting Paraiso U.F.O. to Acid Mothers Temple & The Cosmic Inferno, each bringing a new facet of trippy noise and rock n’ roll. At the center of this ever-shifting kaleidoscope of musical collaborators, Kawabata Makoto acts as both originator and catalyst for a cosmic musical energy that stretches beyond the boundaries of the strange and into the realm of the sublime.

His first exposure to electronic music from the West came to him through a midnight radio program called Gendai no Ongaku. There, he heard artists like Karlheinz Stockhausen, whose expeditions into the possibilities of electric noise are a legend unto itself. However, Kawabata’s interest in the unearthly sounds of electronic music began long before he tuned into Gendai no Ongaku, and it came from far beyond even Stockhausen. “Before discovering electric music like Stockhausen (I was about 10 or 11 years old), I thought [I heard] messages from a U.F.O.,” says Kawabata. “I didn’t know there was [electronic] music the same as the sounds I [received].” His discovery of electronic music followed on the heels of a more pervasive and commanding creative influence.

While most musicians will claim at least some level of personal involvement with their music, Kawabata takes his influence far more seriously. “All of my music comes from my cosmos,” says Kawabata, “so I just listen and play.” Indeed, the music channeled through Kawabata often sounds like distorted radio signals from another world, perhaps offering a glimpse into an alien intelligence. “This is not a ‘[belief],’” he says. “This is really still happening now. I can [hear] music always, at any moment.” That sense of conducting or receiving signals from beyond might seem unbelievable, but the Earth radiates radio and television signals every day. Who knows what kind of interstellar noise is traveling the cold vacuum of space, beaming down to us from the stars …

Kawabata even carries his sense of receiving cosmic direction into his live shows. “We don’t prepare even set lists before the show,” says Kawabata. “We can know what we should do on the stage, moment by moment.” To him, the process of playing live boils down to the interaction between his cosmos and the musical spirits of his bandmates. “Playing live means networking [through] each musical spirit,” he says. Meanwhile, his work with other musicians on his Acid Mothers Temple records are more controlled and intentional. He says, “Recording means collaboration to make complete my musical vision.”

Kawabata’s reputation for experimental trip music has attracted the attention of established artists like K.K. Null and Tatsuya Yoshida to work with him on various projects, as well as younger artists like Satoshima Nani, who is filling in for longtime Acid Mothers Temple drummer Shimura Koji. Consequently, his numerous side projects and occasional solo albums continue to provide outlets for his transmissions, and he doesn’t seem to be slowing down at all. In fact, just for 2015, he plans to tour the UK and France with Acid Mothers Temple & The Cosmic Inferno, later visiting us in the U.S. with Acid Mothers Temple & The Melting Paraiso U.F.O. Then, he’ll be releasing albums with K.K. Null, Mainliner, Andomelos 2, Human Shower, Pikachu-Makoto, Floating Flowers, Kawabata Makoto & The Mothers of Invasion and a musical/visual performance with liquidbiupil. “Of course, solo works, too,” he says, almost as an afterthought, “but nobody knows [the] future. Nothing for sure.”

Kawabata puts out more albums every year than most bands can produce over the course of a decade, but each project has a unique and distinct style as though his cosmos is filtered through the lens of his fellow artists. Just listening to the relatively tame psych rock of Mainliner beside the all-out noise assault of Human Shower barely scratches the surface. “Rock is entertainment for me,” says Kawabata. “It makes people happy.”

His solo material, however, takes a step away from rock n’ roll and into lush, ambient sound compositions. “For me, AMT is different from my other music,” he says. “I started my music activity in 1978, [when] I played so-called experimental or avant-garde.” More of those early recordings are being re-issued on Kawabata’s home Acid Mothers Temple label, showing his progression from untrained musician to interstellar rock communicator. Even as he approaches another busy year in 2015, he remains humble. “I just want to stay at my temple more,” says Kawabata. “[At] times, though, it seems impossible.”

Absolutely freak out and zap your mind with Acid Mothers Temple at the Urban Lounge on April 24, along with openers ST 37 and The Moths, who will be releasing their new album at the show. Tickets are $8 ahead of time, but the cosmic vibrations of the universe are free to all—anytime, anywhere.