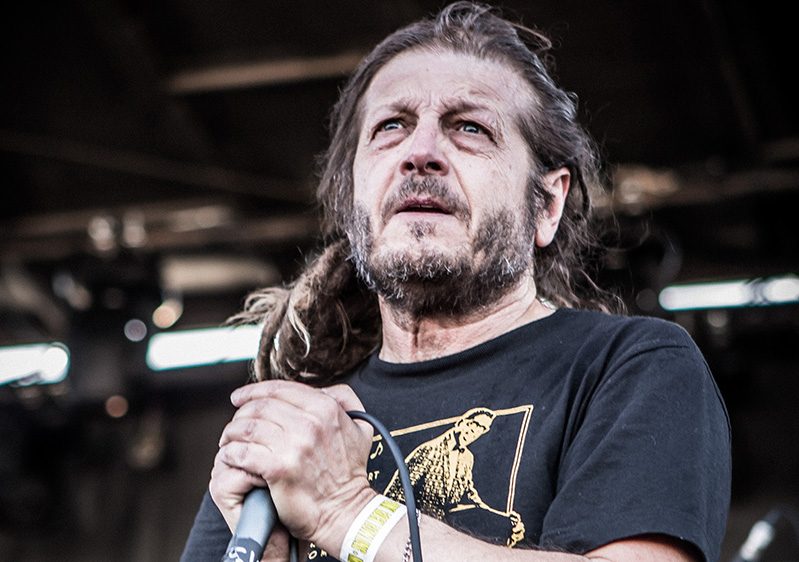 The first time I ever met Keith Morris was when I saw OFF! at the Loading Dock. When I asked him for an autograph and to pose for a picture, he complied but he didn’t say a single word while doing it. So, when time came for me to exchange more than one word with Morris, my nerves were on fire. When he picked up the phone he got on for about 15 minutes about sleep deprivation, phone surveillance, his love for The Damned’s keyboardist, and that if you punched him in the head and knocked him out, you’d be doing him a favor by erasing a Good Charlotte show he had witnessed. When we did get some words in about the Punk Rock Bowling Festival and his expectations of performing with Bill Stevenson, Dez Cadena, Chuck Dukowski, and Stephen Egerton in FLAG, his words were anything but boring as he’s a man who’s blunt in his delivery and even more so in his sense of humor.

FLAG has been referred to as the closest resemblance of the original Black Flag, as most of its members are not only pivotal in the band’s many lineups, but all bring the same energy and aggression as they did back in the old days. “We love each other’s presence,” says Morris. “We know that we’re older guys—we’ve known each other for years and years and years going all the way back to being Neanderthal men battling dinosaurs.” When Morris left Black Flag in 1979, the militaristic practice regimen laid out by Dukowski was what drove him out. Now, all five members don’t rehearse or play shows for years at a time and when they do, they perform like a band. “We perform because we know these songs, we love these songs, we live these songs, and we ARE these songs,” says Morris. “So, we don’t need to step up and defend ourselves, all we need to do is to step up and be motherfucking loud and proud.”

“Go out and do stuff. Go out and meet some new people.”

I can vouch, that the times I have seen FLAG, it felt like I was seeing the actual band and not just scene veterans trying to relive the glory days. The energy that Morris speaks of when playing with FLAG is true and it’s translated and absorbed by the audience. “We have this thing called the internet and people sit at home and they watch stuff on YouTube, or Hulu, or ‘zoo-zoo’, or ‘boo-hoo,’” says Morris, “The one major thing that’s lacking when you’re watching something on the screen attached to your computer is the energy, the sites, smells the vibe and the slippery floor and bodies flying through the air.” There are certain things that can’t be caught with a camera, and Morris is a firm believer in that the only way to experience something is to go and live it. “Go out and do stuff. Go out and meet some new people,” Morris says. “Go out and smoke some cigarettes and drink some beers in the parking lot. Make some new friends. Maybe what you’ll do between songs is you’ll hear some new music.”

Since FLAG doesn’t rehearse often there is no time to switch up the setlist or learn a handful of other songs. Because Morris is buried with OFF! and Egerton and Stevenson are piled high with Descendents, there’s no room for more shows than what they’ve given us. “It turns FLAG into just fun time,” says Morris. “Do not hold your breath waiting around for FLAG playing any other shows.” If anything, the sparse rehearsals just makes for more prep time to gear up for the show and makes it more special. “We have to be happy and we have to dive into it when we have the opportunity,” says Morris. “We embrace whatever time we can get together.”

“Punk rock is about freedom.”

These days, Morris continues with his main band OFF!, who are currently writing and recording a new set of songs for an upcoming LP. “We’re in a situation where we have two drummers—Dale Crover (Melvins, Redd Kross) and Mario Rubalcaba (original drummer for OFF!, Earthless, Hot Snakes)—who are going to lay down their tracks for these songs,” says Morris. “So, we’re going to have 50 songs to choose from, so we’re going to have the comparison—is it McDonalds or is it Burger King … that’s a terrible analogy.” The LP, once recorded, will also function as the soundtrack to a movie that they are filming in February.