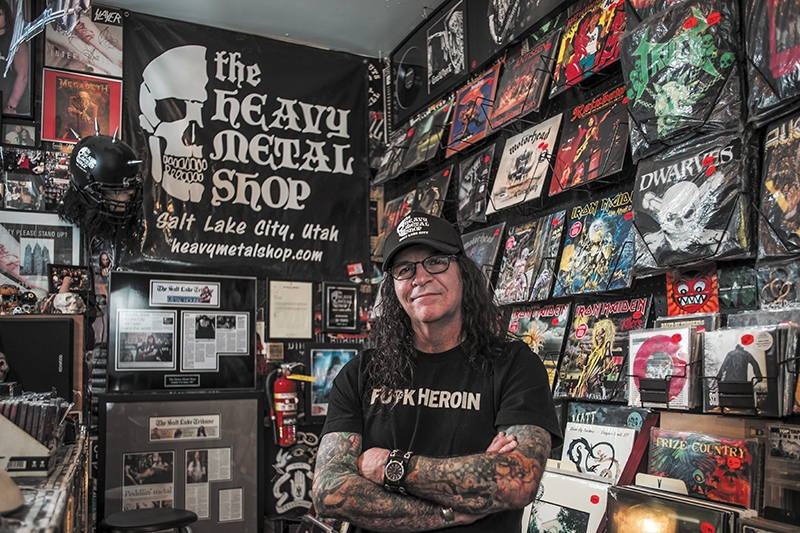 Kevin Kirk is the guy behind the counter at The Heavy Metal Shop on 63 Exchange Place. He’s the guy who answers your endless questions about metal and rock (and more recently, a ton of roots rock and Americana-type music) from noon to 6:66, as it says on the door. This guy is a virtual encyclopedia of musical knowledge—if you haven’t visited him and had a discussion about anything from Venom to Drive By Truckers, well then, you’re missing the boat. One thing to mention is The Heavy Metal Shop’s in-store performances. If you have missed these, it’s time to check one out. Kirk has had a diverse list of performers coming in since 1999 that includes: Supersuckers, Justin Townes Earle, Dwarves, John Moreland, Kleveland, Micah Schnabel, Michael Dean Damron, Patterson Hood, Lydia Loveless and Scott H. Biram—and too many others to mention. Rockers from around the world know Kirk, and, in this article, I hope to contribute to giving back to a guy whose DNA is interwoven into Salt Lake City’s music presence. Two benefit shows for Kirk are being held this month at Area 51 and Bar Deluxe, and they’re not to be missed!

Kirk had an extended hospital stay over the holidays, brought on by a collapsed lung. On Dec. 15, he was at his Avenues home cleaning out his extensive collection of memorabilia when a coughing fit from dust brought on the condition. “Then I get the flu [while] I’m here at the shop, and I can’t move,” he says. “I knew something was serious, so I closed up. My wife, Angie [Kirk], took me to the doctor, and I ended up in the emergency room. My lung was collapsed. The doctors thought I was a chain smoker, but I haven’t had a cigarette since 1996!” As it turns out, Kirk’s condition had come from a small tear in his lung probably brought about by the coughing fit. He had to have surgery to repair this, and it kept him in the hospital for the entire holiday season, his biggest revenue-generating time of the year.

When we were talking about Kirk’s hospitalization, the most touching part of the story was when he talked about his wife. Angie is the love of this guy’s life. They have been together for 33 years now and have been married for 32 of them. Discussing spending Christmas in the hospital, he says, “You might think that Christmas in the hospital would be a bad thing, but it wasn’t all that way. On Christmas, Angie came to visit, and we got to walk around together, hand in hand. I had my little machine beeping behind me, and it was just peaceful. I was really happy to have her with me. The only things I really missed were being home with the kids and being able to be at the shop.” Regarding what he missed most about the shop during the holidays, Kirk says, “A lot of times, I only see people around that time of year, and I was really sad that I didn’t get to see a lot of them. Big Jer (Jeremy Johnson) and Patrick (Carnahan) worked with their regular jobs and ran the shop so it didn’t close. It was so nice of them. They are really good friends. As a matter of fact, they did better than I did last year at the same time, haha!”

James (Jimmy The Tooth) Parks and Jeremy Sundeaus, with the help of Area 51 and Kaci Tokumotu of Bar Deluxe, organized the benefit shows in February to try to help cover a huge medical bill for Kirk’s extended stay. Kirk says, “It was a surprise to me, and it brought a tear to my eye. It was a metal tear, but it was a tear. No, really, it is touching that people care this much about me to do this. It’s very nice, and I appreciate it very much.” The first show will be on Feb. 11 at Area 51. The bands performing will be Shadow Windhawk and The Morticians, Blackkiss, Truce in Blood and Fail to Follow. A second show on Feb. 27 will be at Bar Deluxe with Thunderfist, Muckraker, Old Timer and Dwellers performing.

Kirk is a great guy to visit and be around, and I am really glad that he is recovering well. I’m glad to have him around to be “peddlin’ evil.” I look forward to see him doing it for years to come! To quote our lord and master Dio, “LONG LIVE ROCK AND ROLL!” Hopefully, we can pay back Kevin’s generous and hospitable nature by bringing the noise and raising some money for a true SLC icon. Cheers!