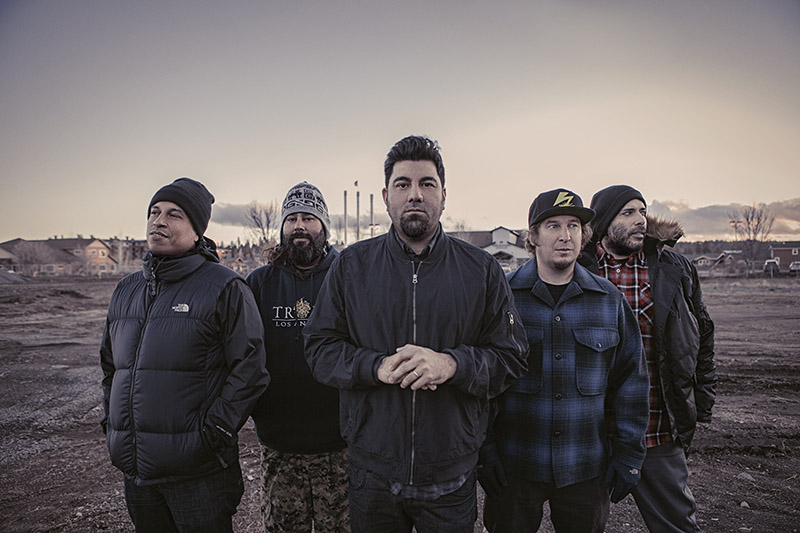 Kickoff Your Summer with Deftones and Rise Against

Utah is kicking off July with one of the most epic concert lineups for the summer of 2017: Deftones will be slaying the stage with Rise Against, Thrice, Frank Iero and The Patience at USANA Amphitheatre on July 1. Frank Delgado (keyboards, samplers, turntables), who has been a member of the Deftones since 1999, gives our readers insight into this summer’s upcoming concert, discussing the their latest album and diving into the history of his long-standing rock band.

The Deftones are one of very few bands that started in the late ’80s that continue to pay homage to their original fans while also branching out to new audiences with their latest album, Gore. Gore was also written differently than its predecessors—rather than planning out a block of time to record their music, Deftones decided to get together over periods of weeks, writing one song at a time in between tours. “[Gore] was a different way of writing,” he says. “It worked out. I think we were able to wrap our heads around ideas and songs longer, as opposed to getting together to try and capture lightning in a bottle.” But, as many fans would agree, Deftones definitely struck lightning with Gore, which incorporates elements from fan-favorite songs, including heavy synth, seductive vocals and deep bass. “I think it’s just a learning process for us,” says Delgado. “We’re just getting better at what we do … Both trusting in our ideas and ourselves—that’s the biggest thing.”

It’s no surprise to Deftones fans that the band has continued to thrive over the years—but that doesn’t come without a price. “There’s a lot of give and take being in a band,” says Delgado. “There’s a lot of time that family doesn’t get because you’re woking. … And then losing a member of the band, like when we lost Chi [Cheng], that’s a heavy thing. The trials and tribulations. But getting through those things … coping and learning how to deal with them, that’s what keeps us going.” The bandmates also thrive with each other, having become a close-knit family over time. “We all really enjoy each other’s company,” says Delgado. “We all want to make the best art possible and present it in a good way, then go out and play it in a way where we can all enjoy the process together.” He mentions that, for the band, it’s all about the art and the records. “That’s what we put our energy into,” he says. “The records. It translates into people appreciating them.”

The records are only half the magic that Deftones can produce. When they throw a show, they mean business and never disappoint. The upcoming tour with Rise Against promises to deliver one of the best concerts of the summer. “It sounds like a fun summer tour, honestly,” says Delgado. “We’ve played many shows with [Rise Against], as far as festivals go. They’re nice guys.” The Deftones are also just excited to be back on a festival tour with one another. “As a band, we love summer touring as friends,” says Delgado. “It’s hot out and we’re usually barbecuing in the parking lot. It makes for a fun time, and we’ll be a lot closer after this. That’s the point.”

People who live outside of Utah don’t usually see the fantastic underground and alternative community that belongs to SLC and other cities in Utah. However, the Deftones know that our communities are alive and well. “We’ve always made the trek through Utah at one point or another,” says Delgado. “I love Salt Lake and everywhere else we’ve played in Utah. There’s something you can tell: There’s always been a big rock thing and punk thing there. That’s something to look forward to.” What Frank Delgado is looking forward to the most, however, is being out with the band again and bringing a kick ass show to each city they visit. “I’m looking forward to having a really good time and putting on the best show possible,” says Delgado. “And doing that with the Rise guys. I know we’re going to have fun. And everyone else should have a really good time.”

Don’t miss the show on Saturday, July 1, at USANA Amphitheatre. Doors open at 5 p.m., and the show runs roughly from 6 to 11 p.m. Grab your tickets and find more information at usana-amp.com.