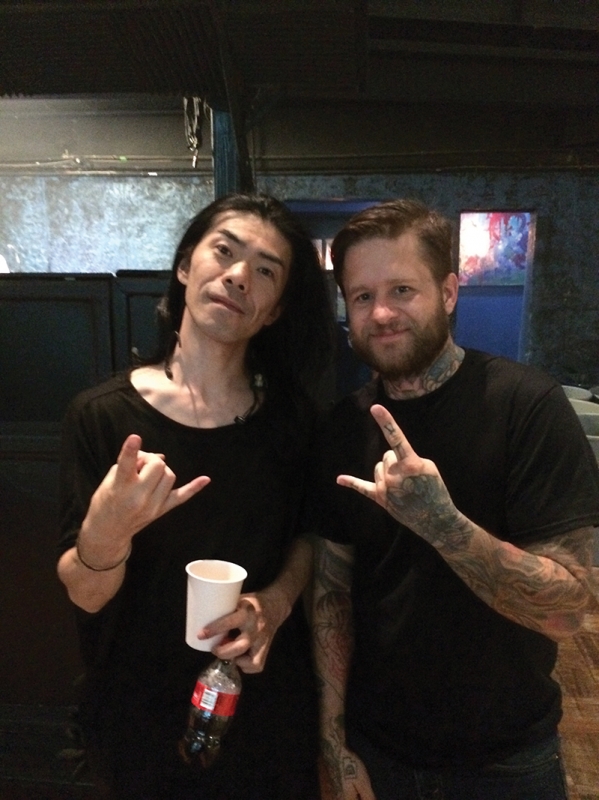 When I asked Kory Quist to give me the highlights of his time spent on tour with SubRosa, who was supporting Boris, he replied with a surreal 10-item list where each entry baffled me more than the last. That long road across the USA could make animals of us all, and Quist seemed very near the line where sleep deprivation and malnutrition collide.

Taking your band on tour demonstrates a perverse willingness to submit yourself to a cramped, rickety van that smells like sweaty feet and stale farts. It’s about dealing with flat tires and flaky booking agents, and no matter how much you might try to romanticize it, many bands find themselves woefully unprepared for the journey. Few who know the perils of that long trek beyond Utah’s straight-laced borders are willing to go, much less to support a band they’re not even in.
Quist’s wild and weird tour tales start with a series of wacky snack-related inside jokes that could have only come from being in close confinement with delightfully strange company. However, I began to suspect Quist had angered some vindictive deity earlier in his lifetime when he told me about the first half of their tour. He was attacked by a vicious insect in his sleep at their first stop in Denver, leaving itchy bites all over his body. Then, in Kansas, Quist had to run out into the woods to take a piss. He decided to take a gamble on a fart, and he lost. “So there I am, butt-ass-naked in the woods just a few feet away from the gas station, trying to clean myself up,” he says. “I will forever miss that pair of undies. Good luck, guys—hope you’re safe.”
Once they met up with The Atlas Moth in St. Louis, the band hit a string of smaller venues across the South, making their way down to Atlanta. Once they arrived, Quist says, the real tour began. He says, “I remember us all walking into the venue where Boris was sound checking, and I think the reality of this tour hit us all like a ton of bricks. From there on out, most of the venues SubRosa played had a 500–1,000 [person] capacity, with half that already sold on pre-sale tickets.”
One of the big stops on the tour after that point was D.C., where the band played at the 9:30 Club—one of the landmarks of East Coast alternative music, and “a huge check mark off the bucket list for everyone,” according to Quist. “It was by far the best organized, most well-runvenue we stopped at.” He says that the venue provided food for the bands as they loaded in their equipment and had a great menu of fresh and vegetarian options to order to their green room. “Let’s not forget the half-dozen ‘9:30’-topped cupcakes that were waiting for everyone,” he says, “We loved this place.”After that, the band played to a sold-out crowd at New York’s Bowery Ballroom. “I was very impressed by the energy they had that night. To play that well and have the crowd love them like they did in a city like that can make or break a band,” says Quist. “It brought a few tears to my eyes to see great people doing great things and being recognized for it.” With around 1,000 people in attendance, it was one of the biggest shows SubRosa has played to date.Unfortunately, according to Quist, “It cost about 50 bucks an hour to even be in [New York] City.” So the band headed up to Connecticut to find a hotel near their next gig, and found themselves directed to a place called the Honeyspot Motor Inn in Stratford. “At first glance, it’s a nice, little privately owned place, but once we entered the building, things changed quickly,” says Quist. “It was 4 a.m., with patrons coming and going at that hour, mixed with the smell of cigarettes and some other chemical that was being burned. As we walked the halls to our room, it became clear that we were in a hotel fueled by crackheads and hookers.” Luckily, they dodged that bullet and found someplace else to spend the night.Near the end of the tour, the band headed up to Toronto, where a chain reaction of stressful craziness began. The band’s phone plans weren’t working in Canada, meaning they had no access to GPS to help them find where they were going. “We were 30 minutes late, fighting rush-hour traffic and sleep deprivation,” he says. “While I’m flying down little city streets trying to get us there before sound check, Sarah [Pendleton, violin], from the back of the Suburban, announces, ‘Don’t look: I’m peeing!’ I’m laughing so hard, trying to figure out if I’m sleeping or if it’s real life. To top it off, I can hear, ‘I need another cup!’ coming from Sarah.” Luckily, the band made it on time for sound check, and Sarah got her second cup.Despite the chaos, Quist is happy to have been invited along on such a legendary adventure. However, now that he’s home, he must now prepare for yet another tour—this time, with his band, Making Fuck. They’ll be playing their tour kickoff show at the Shred Shed with fellow SLC thunderheads Yaktooth and Die Off on Oct. 10. Bring $5 and wish them well!
Photos: