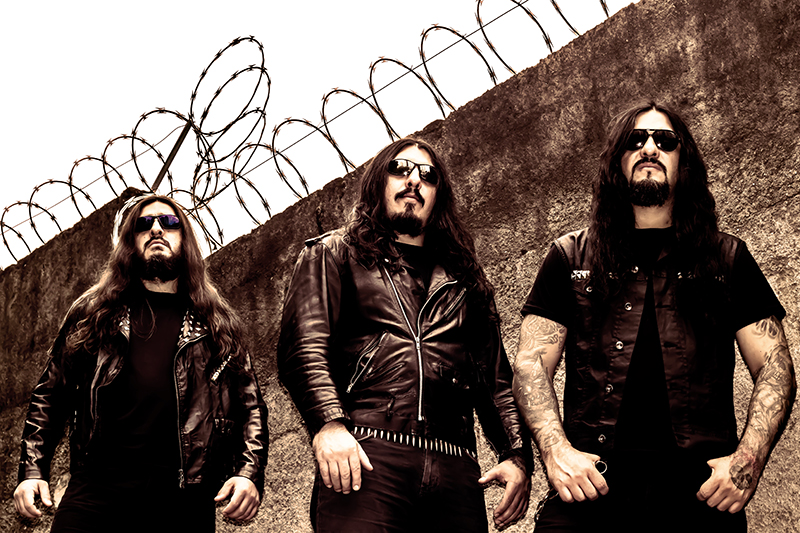 Krisiun will venture to Metro Bar to run the Land of Zion through a brutal death metal blender on Sept. 18.
Photo: Pri Secco

Brutal death metal often gets taken to task for being redundant—often featuring anti-religious themes, the usual standards and “more of the same” pervade, so brutal death cries out to break new ground with room for deep emotional thought. Brazil’s brutal death metal trio does exactly the fucking opposite: full-on negative music that’s as disrespectful to religion as possible—because it’s fucking death metal. It’s supposed to be pissed off. Skull-crushing music with themes other than that make no sense. Krisiun will play their irreverent tunes in Salt Lake City on Sept. 18 at Metro Bar, co-headlining with Origin.

In an interview with drummer Max Kolesne, he admits to the changes the band has gone through since their early days. “We feel the need to play something different,” says Kolesne. “The new stuff we play, it’s more dynamic … It’s still metal all the way.” Going through the catalog of the band through the years, one could say that there are three different eras for the band: the earlier and much faster days, 1990–2001; the middle era that has taken much criticism from fans, 2003–2006; and now, from 2008’s Southern Storm to the new, highly dynamic Forged in Fury, released Aug. 7. The matured Krisiun write music by jamming and putting songs together as the ideas flow from the band of three tight-knit brothers. “It’s all about playing metal but adding something different,” says Kolesne. “You’d be really boring just to keep playing the same kind of stuff and releasing the same kind of album all the time.”

For new record Forged in Fury, Krisiun combine the classic speed and brutality with newer dynamics and a natural sound production. Along with a great love for the older material, I’ve also grown fond of the last two albums, Southern Storm and The Great Execution, because of the more mature-minded death metal songwriting. Forged in Fury stays true to the old-school, speed-riddled metal often called “the blender”—it can sound like making a meat smoothie, and it punches in some fantastic guitar harmonies in its solos and lead work. Forged in Fury also touts some slower grooves, such as “Dogma Of Submission,” a track with slower, grizzled tempos to pound listeners into submission. Forged in Fury can attribute much of its excellence to the production, too. In my opinion, it’s the best thing producer Erik Rutan has produced. Kolesne, while happy with the production on the last few albums by Andy Classen, mentioned that the band wanted to try something new. The result is a clean-sounding album that showcases the tighter songwriting, but with more of the raw sensibility of the old-school Krisiun sound.

“Krisiun is the kind of band that cannot sound too clean or too polished—it has to be natural and raw and ballsy, with a lot of low end, [and] the natural and dynamics have to be there,” says Kolesne. “We knew [Rutan would] be the right guy to do it—he thinks that way. He works in a different way for each band … I’m so happy and satisfied with the result—he did a really great job.”

Kolesne helps add to the clarity and sound of Krisiun. He’s a drummer with a huge talent in death metal, and I feel that his ability to play fast and clean and to use triggers in the best way is overlooked. Triggers often get a negative reaction—sometimes fans say the method of playing a sample with a drum strike is, in a way, cheating. Kolesne said that what he does live is usually the same as in the studio—50 percent mics and 50 percent triggers. Kolesne mentioned that if natural kick-drum strikes are miked normally, the outcome can be a sonic blur, even for an excellent drummer—the sample from the trigger just adds more clarity to the kicks. “It’s going to be even harder because the sound of the trigger is clear, and it’s there all the time, so you have to make sure you’re going to play really well,” says Kolesne.

I admit, sometimes lyrics for death metal can get silly—when you can discern them. Krisiun stick to the themes they started with, but the band likes to keep them in reality, touching on topics of slavery, chaos, conspiracies, war and how people are still slaves to religion. Krisiun may get this inspiration for how they view the world, but they note that they’re fortunate. “We’re lucky to live the way we live in a country like Brazil, even though it has so many problems like corruptions or criminality,” says Kolesne. “We have a good life here—we’re lucky to be born here. … We’re free to live the way we like to be, to have our own thoughts.”

Krisiun deliver brutal death metal in the most excellent form possible, filled with so much energy and speed that if you don’t watch your headbanging, your neck just may snap. Kolesne stated that even if he doesn’t feel well, once they hit the stage, it’s only natural to give it their all. Krisiun play Sept. 18 at Metro Bar in Salt Lake City.