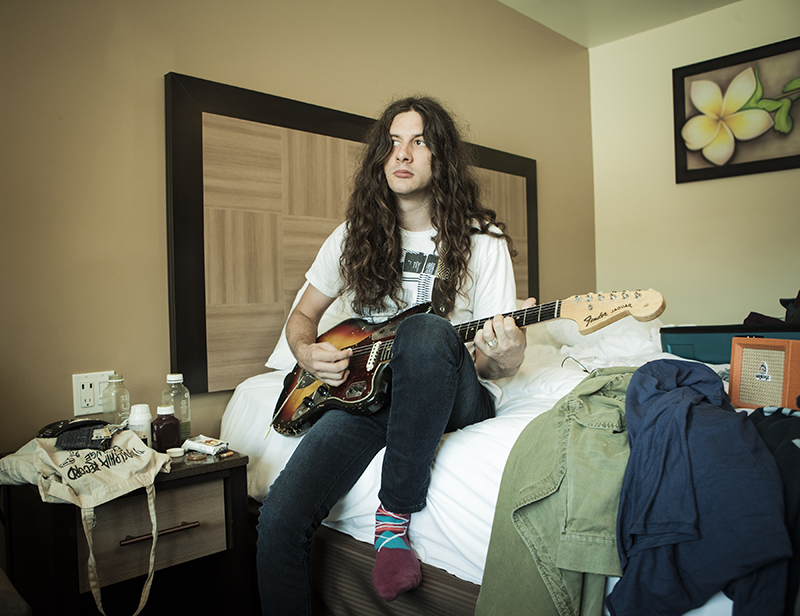 Listening to Kurt Vile for the first time, or even returning to him after a long while, can feel strangely disarming. It’s an effect created partly by the wistful nature of his wandering guitar style and partly from the tired way he sings his lyrics, like he’s joking from the side of his mouth. His sixth studio album (barring six EPs and his work with The War on Drugs), b’lieve i’m goin down…, released in September of 2015 on Matador Records. This past year has given him his largest amount of exposure to date, including live television performances, two radio singles, a Rolling Stone interview with J. Mascis, animation appearances and more.

Currently on tour, Vile recently finished a big performance opening for Sufjan Stevens at the Hollywood Bowl in Los Angeles. The past few months have been good for Vile, he says, now that he’s had time to wear his new repertoire comfortably.  “I’m not under its spell like I was at the beginning, like, ‘Oh, we gotta deliver this record,’” says Vile, seemingly thinking faster than he can speak. “The single ‘Pretty Pimpin’ has a life of its own, and that’s fine, but … I’m stoked I’m not a slave to [the album].”

Unlike previous albums, b’lieve i’m goin down… was mostly written without the help of a producer. Vile had been accumulating countless self-recorded riffs and hooks he had come up with while on tour for 2013’s it’s a big world out there (and I am scared).  After coming home, Vile sat down and began piecing the parts together and expanding them to their full potential. “This time, I was figuring things out for myself again, rather than having someone lead me along,” says Vile. “I wanted to make it as organic as possible.”

Tonally, the record sounds noticeably more direct than Vile’s previous albums, with the use of strong piano lines and less of the ambient guitar drones found back in “Smoke Ring For My Halo” or “Childish Prodigy.” However, writing b’lieve I’m goin’ down… helped Vile connect more with other songs from his past that foreshadowed this newer direction. “Lately, the songs that sound better than ever [live] are in the wheelhouse of our soulful electric guitar zone,” says Vile. “Songs from Wakin like ‘KV Crimes,’ ‘Wakin on a Pretty Daze’ and ‘Goldtone’—they sound so killer … so I figure, maybe I’ll put out another record and all of the sounds will make sense together.”

Lyrically, though, Vile is still able to somehow beautifully combine themes of self-estrangement, alienation, love and confusion with his laid-back sense of humor. The opening track, “Pretty Pimpin’,” describes the experience of having an existential crisis while brushing his teeth. In the song, despite feeling completely disassociated from his reflection, Vile resolves the feeling with “But he was sporting all my clothes / Gotta say, pretty pimpin’.” “I could say that I’m kidding around a lot, but I want the song to mean something, too,” says Vile. “If you can do both equally, then you’re more serious than the person who’s trying to claim that all they are is serious … that’s my theory.”

It’s a theory that’s paid off. Vile describes that even though b’lieve I’m goin down… was written from a place of loss and melancholy, he’s back on the upswing after the success of the past year. Vile’s made appearances on Conan, The Late Show, CBS This Morning, covered the theme song to Adult Swim’s Squidbillies and even did a voiceover for a mouse version of himself on HBO’s Animals. The attention has been fun, even if it’s all a bit surreal. “It’s hard to watch yourself sometimes,” says Vile. “It’s like when you record yourself when you’re young and you hear your voice and it freaks you out … I’m used to hearing my voice in singing but I’m definitely not used to hearing myself or seeing myself on T.V.”

Still, Vile looks forward to keeping the ball rolling after he finishes his tour in September. He already has another batch of riffs ready to begin the making of a new album. However, Vile plans on taking his time. “I like the balance between playing live, having a family, maybe some road trips and recording,” says Vile. “As long as there’s things coming up in the future … If the future is completely uncertain, then that’s when I’m gonna hope the record is done.”

Kurt Vile will play a sold-out show in Salt Lake City with Your Friend at Urban Lounge on Aug. 16. You can pick up b’lieve I’m goin down at kurtvile.com.