After missing their scheduled set earlier that night on Converge’s headlining tour due to van problems, Kvelertak rolled into SLCto play a last-minute show on 10/22/12 and delivered their potent mix of black metal, punk, hardcore and classic rock n’ roll to a rapturous crowd. Kvelertak riled up the crowd so much at midnight on a Monday that multiple fights broke out, but, as vocalist Erlend Hjelvik potently put it when the band stopped in the middle of a song to calm the audience down, “We are here to party, not to fight!” 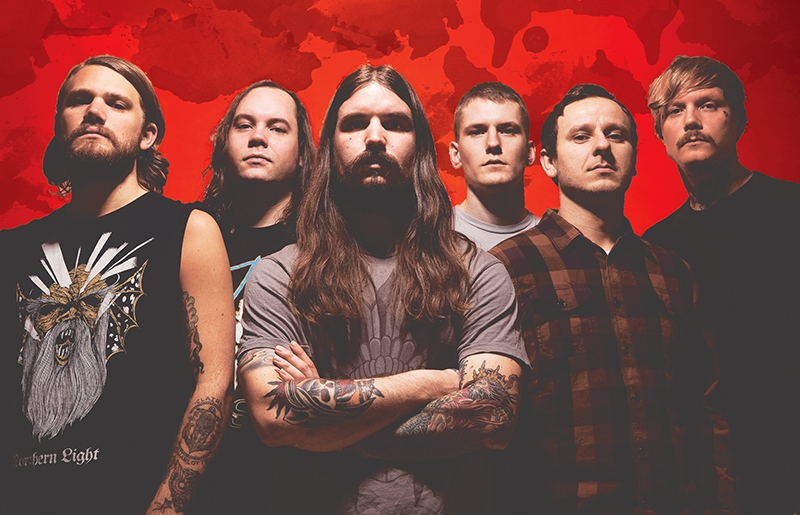 Norwegian sextet Kvelertak will bring their genre-spanning metal sounds to In the Venue on May 1. Photo: Stian Andersen

On Oct. 22, 2012, Kvelertak held a stranglehold on the crowd at Bar Deluxe in Salt Lake City. After missing their scheduled set earlier that night on Converge’s headlining tour due to van problems, the band rolled into town to play a last-minute show and delivered their potent mix of black metal, punk, hardcore and classic rock n’ roll to a rapturous crowd. Kvelertak riled up the crowd so much at midnight on a Monday that multiple fights broke out, but, as vocalist Erlend Hjelvik potently put it when the band stopped in the middle of a song to calm the audience down, “We are here to party, not to fight!” It was one of those shows that only a handful of people attended, and quickly gained legendary status, creating a huge amount of buzz for the band’s imminent return to our city. The band even posted a status update on their Facebook page proclaiming their SLC gig as “the awesomest show of the tour so far.” Now, armed with a new album, the band will be returning to headline at In the Venue on May 1 with Cancer Bats and Black Tusk in tow.

The hype isn’t strictly exclusive to Salt Lake City, either. Since releasing their self-titled debut album in 2010, Kvelertak have garnered legions of fans and numerous accolades. “We had no ambition at all. We just played for fun. Our first goal was just to play a show somewhere—we never thought we’d make it this big,” Hjelvik says. Their first album was certified gold in Norway for selling 150,000 copies—an honor that was commemorated by Dave Grohl presenting the band a gold record onstage. It also earned Kvelertak two Spellemann Awards (Norway’s equivalent to a Grammy), an opening spot for Mastodon and an invitation to play SXSW in 2011. It also afforded the band the opportunity to work with some heavyweights of the American metal scene. “I kinda knew it was gonna go well when we got John Baizley to do the cover work and when Kurt Ballou wanted to record it,” Hjelvik says. Baizley, who also fronts Baroness, is a celebrated artist—and simply having his work on an album’s cover is a huge boon for any band’s career. Ballou has become one of the most demanded producers in metal over the past few years, which also lent credence to the relatively unknown band’s first album.

Like their Norwegian countrymen Turbonegro, Kvelertak have become known for their exuberant energy and rock n’ roll swagger. However, this sextet always takes it one step further. They count three guitarists in their lineup—one of whom finger picks. They liberally incorporate elements of extreme metal into their musical assault, too. The songs are longer, louder, faster. In fact, the new album’s title, Meir, simply translates to “More” in English, and that is exactly what the band delivers. “This album is just completely shameless. We had no limits on ourselves. It’s even more heavy,” says Hjelvik. If Kvelertak’s first album is a party, Hjelvik describes the follow-up as the hangover, but a very specific kind of hangover. “You go ‘Round Two’ and start drinking again the day after. You get drunk real quick, and you’re generally in a weird fuck-you-all mood,” he says.

Even though Kvelertak are still in party mode, Meir sees them refining and expanding their sound. The first single, “Bruane Brenn,” features heavy riffs under Hjelvik’s throaty shouts and a killer chorus populated by gang vocals and sweet guitar licks. “Trepan” sees the band channeling the black metal legends of their home country in the verses and the classic rock heroes of the U.S. in the chorus, while “Spring Fra Livet” sees the formula reversed. Hjelvik’s favorite song, “Evig Vandrar,” opens with an acoustic intro and maintains a Southern flavor throughout. “When we play it live, it really catches people off guard,” he says. In fact, all of the new songs have been catching audiences off guard—it has been three years since Kvelertak introduced any new material into their live set. “It’s weird when we play new songs for people who haven’t heard them—they don’t know how to react or they don’t pay attention. I’m looking forward to people knowing these songs,” Hjelvik says. By the time Kvelertak make it back to SLC, fans will have had plenty of time to become acquainted with the songs on Meir, which was released on March 25. “The cool thing is that no matter where we play, people sing along to the songs, no matter whether or not they speak Norwegian,” Hjelvik says.

While Kvelertak have gained a reputation with their penchant for partying, Hjelvik insists there is much more to the band. “I don’t think we like to be limited to just being a ‘fun’ band. We have some songs that are more serious. We tried to make some songs on this new album that are a bit more proggy and have some darker parts, not just all party songs,” he says. It’s true—Meir definitely showcases a band that is evolving, but it also showcases a band that is still a whole hell of a lot of fun. Kvelertak will be at In the Venue on May 1.