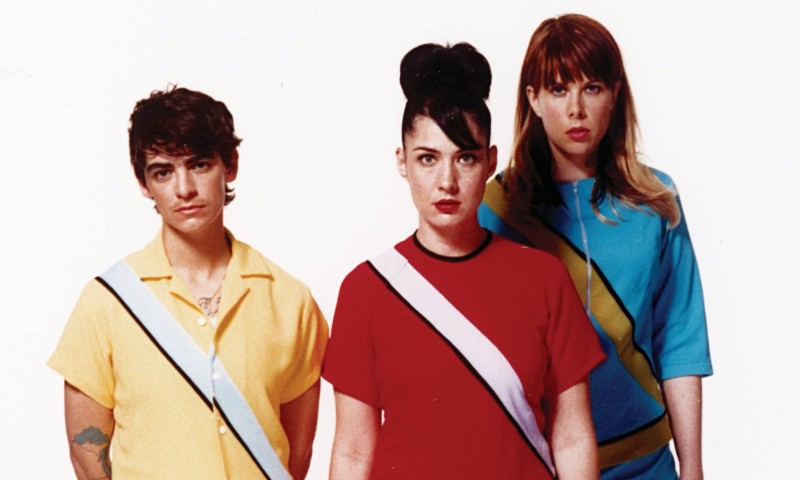 Le Tigre Tear Up Their Prey

Just after Le Tigre finished recording their new album, and days before hearing news that their upcoming tour dates with Lollapalooza and Sonic Youth had been cancelled, I called lead singer, Kathleen Hanna. In the early 90s Hannah fronted the now infamous riot grrrl band, Bikini Kill. Unconsciously pioneering a new movement, Hanna soon became a media darling and the perfect poster riot grrrl for mainstream media to attach themselves to. In an effort to take back control of her musical image, Hannah called for a “press block”. Numerous women in the scene followed her injunction and answered reporters’ phone calls with an abrupt hang-up.

Hanna’s current group, Le Tigre, bears little resemblance to Bikini Kill or to Hanna’s other past projects that have included The Fakes, Helter Skillet, Suture, Viva Knievel, Wondertwins and a solo effort of sorts under the pseudonym of Julie Ruin. In addition, Hanna has made numerous guest appearances on the records of Atari Teenage Riot, Comet Gain, Internal External, Joan Jett, The Rickets, Mike Watt and Metal Church. The feminist punk electronic music of Le Tigre is yet another example of Hanna’s musical diversity.

When SLUG Rang Hannah’s telephone she didn’t hang up, but spoke for a brief fifteen minutes. To get things rolling, I asked her what she thought of their new album.

It’s weird because we’ve been working on it for so long, she says. “We just mastered it and turned it in and I haven’t had a chance to listen to it yet because we had to go right into rehearsing for the tour. I’m psyched, though, because all the songs we’ve been working on live are going to be really great. We were really thinking about what stuff would be like live when we were working on the record.”

Le Tigre is infamous for putting on a good live show, which incorporates multifarious elements in the performance.

I ask, “How does this album differ from your previous records?”

“It’s slightly more produced,” she responds, “Just because we spent a lot more time on each individual song and made sure we had all the frequencies covered. We wanted it sonically to be thicker than our previous stuff. It’s pretty poppy. We had a song on our last record called FYR, and probably other people don’t think it was poppy, but I thought it was pretty poppy. It had a chorus and a ramp leading up to the chorus. We’ve been writing much more in that style; a traditional pop-style because those are the songs that translate best live and are the most fun to dance to. There is still a lot of politics on the album, though.”

“It seems like your sound is really economical,” I say. Lo-fi is a term which Kathleen Hannah doesn’t like to use in description of her music, because Le Tigre is produced, they just don’t use a lot of stuff to make it.

“We still have that, but we wanted to have more dynamics, which is a really difficult thing to have when you’re doing electronic music. When you have a lot of guitar and live playing, you can really have the feeling that parts are building and getting bigger. When it’s just a drum track and a cut-up guitar, it’s hard to have those dynamics. But we don’t want it to sound like we’re trying to do a rock opera. Some of the sparseness for us doesn’t translate as well as it could live because it can sound sort of like we’re doing spoken word. There’s just a drumbeat and a bass line and a little keyboard. Some songs are really simple and work, but live, we wanted a smattering of songs like that and some songs that are more of a wall of sound. Instead of just using one bass line, we’re using a live bass and a sub-bass keyboard, so that we still only have that one simple part, but it’s filled out.”

The record label Le Tigre has been on for its two previous releases, Mr. Lady, is going under. They are moving on to a new label, signing with Strummer Records, a division of Universal. “it’s a major-label release,” notes Hannah.

As far as where women stand in the current music scene, Hannah states she feels “out of the loop.”

“Usually I’m in a studio and working and not paying that much attention. The stuff that I listen to is the CDs my friends send me of their music. There’s this girl, Cannonball Jane, out of Boston who sent me this really amazing CD called Street Vernacular. It’s just samples and her voice is like a whispy Carol King. It’s just amazing. Stuff like that I really like. I don’t pay that much attention to mainstream music, so I don’t really have an opinion about women in rock. Evanescence, I guess, would be the women in rock right now or is No Doubt rock? I don’t even know what women in rock is right now. When you see those articles, that’s what you see: Evanescence girl and Gwen Stefani.”

“I like Sleater-Kinney,” responds Hannah. “I haven’t seen them live in years and we just played a benefit to help pass the legislation for gay marriage. They were just amazing. Corinne’s voice is just incredible. I’d like to see them be something very mainstream. There’s still really cool stuff going on. There’s that girl in Pretty Girls Make Graves, there’s The Gossip, who I think are amazing, there’s Casual Gods. Those are the groups I’ve been most interested in, but I don’t know if they fall into the typical “women in rock” category. I just think that they’re people who make great music.”

I ask her how she feels about how conservative our government is right now.

“It’s horrifying,” she says. “It’s just like bad dream. It’s just beyond explanation. There are a couple songs on our new record which address that. Actually, I just saw this documentary, Remote Control, about Aljazeera TV. It’s really awesome to hear smart people talking about the war. I think it’s really crazy that so many people in North America don’t even acknowledge that the war is still going on, we didn’t win it, there are still people being killed, it’s not over. Also, people think that this war is the only war to happen in 20 years when there’s been wars going on all around the world. We were in Desert Storm and that was a war, not a video game, a lot of people were murdered. It’s just amazing how television works. Listening to Rumsfeld lie lie lie and Bush lie lie lie makes me feel insane.”

“You’ll be coming to Salt Lake with Sonic Youth and you guys have played here before,” I ask. “What do you think of Salt Lake?”

“When I was in Salt Lake, I went to the doll-and-craft store downtown. There were people with really huge drinks. You know when you get a Big-Gulp at 7-11? They were bigger than Big Gulps. They were buckets. People were waiting for the bus and everywhere I looked there was someone with a bucket-sized soda. Where do people get bucket-sized sodas? That’s all I really remember. The last time we played there, people just sort of stared at us like, “What the *****?”

“Do you often get that reaction to your performance?” I ask.

“I think because we have video, that sometimes people watch it like it’s a TV. We’re trying to make our new video simpler so that people don’t feel like they have to watch the video. So that it’s more like wallpaper with a little content in it that brings out what we’re singing about in some cases and in some cases it’s just like a light show. We realized that when we have too much stuff going on in the video, people don’t want to miss anything so they just stare at the video. And I want people to look at me and my cute hairstyle. We don’t want people to zone out into TV land. The point is that we’re all together in a room. We don’t want our video to help people to go away, we want it to bring us closer.”

“Feminism is the new ‘F-word’ to many people. Do you guys try to change that notion intentionally?” I ask.

“I don’t think it’s really a reaction to the stereotype so much as it’s just being who we are. Those stereotypes are so offensive and we definitely want to educate people about the stereotypes because there are all kinds of feminist music and we’re just one little point in the spectrum. Yeah, there’s feminist folk music and some of it’s really fun and really great if you give it a listen”.

“But it’s the same way with a lot of feminist art. When I was in college as a photography major, I was constantly being told about Mary Beth Edelson or even Judy Chicago, who did the Dinner Party. It’s not my aesthetic, but that doesn’t mean that I shouldn’t check it out. A lot of stuff isn’t my aesthetic and I check it out. But I was really discouraged from even looking into this work because I was told it was goddessy, it was biological determinism, it was all these things that a hip feminist in the 90s was supposed to be against. What’s funny was I was really encouraged to keep an open mind when it came to artists like Ansel Addams. I think it’s really similar in music”.

“Basically just any music or art made by a feminist or any woman is gross and bad and stupid and old-fashioned. And it’s old-fashioned immediately. We’re discouraged from just checking it out. People have to realize that these stereotypes are a part of sexism. It’s a part of the wall of silence surrounding women’s art. And I don’t want to perpetuate it by having our band put it this way like, “most feminist music is not sexy or fun, but Le Tigre’s really danceable and sexy and fun because I haven’t found that to be the case. Most feminist musicians I’ve known I’ve found to be really funny and interesting and multi-dimensional.”

I read about an incident in which Kathleen Hannah’s tampon fell out in the middle of a performance. To avoid the incident appearing like feminist performance art, she tried to discreetly toss her underwear aside without anyone noticing. I asked her if she often encounters this – people believing that everything thing she does is a statement.

“Oh, totally. It’s insane. I think that I’m just having a normal conversation and then I’m met with, ‘Wow, you’re really nice. I heard you were such a *****’ Everything I do gets read into.”

Le Tigre was supposed to play with old friends Sonic Youth, in Salt Lake July 25 at In the Venue. Although they will no longer be in attendance the show will go on.

“We’ve been really lucky. People have always supported us. If people don’t like us, it’s fine. I don’t feel the need to be liked by everyone. I just want to encourage women to give us a chance and to tell them that being in a band is a lot easier than it looks. I never thought I could do it, either. It was all a lie that it’s hard. It’s way better than nine to five.”

Although Hanna has the replaced choreography and costumes for mosh pits, this hasn’t dimmed or diluted the fervor or the content of her music with Le Tigre. Hopefully when the group does reschedule their tour, Salt Lake City will make their A-list.