Though many metal fans say the direction Darkthrone have taken is trash, this hasn’t fazed the band and their musical progression. Darkthrone’s new studio offering, The Underground Resistance, is available now from Peaceville Records. The album is a nod to the past of metal, specifically the ’80s. It’s a metal journey that sees new territory for Darkthrone, and SLUG discussed it with Fenriz in an email interview.

Leave No Cross Unturned: An Interview with Fenriz of Darkthrone 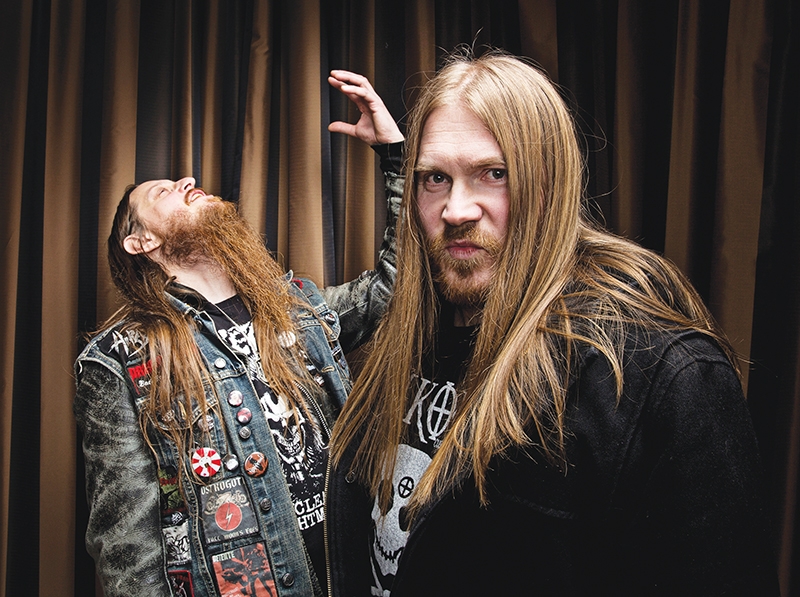 Many things have changed for me since I first listened to my copy of Darkthrone’s Soulside Journey and eventually transformed the CD into a useless piece of plastic through overuse. The same can be said for Darkthrone and the scene in Norway from which they spawned. Though many metal fans say the direction Darkthrone have taken is trash, this hasn’t fazed the band and their musical progression. Darkthrone’s new studio offering, The Underground Resistance, is available now from Peaceville Records. The album is a nod to the past of metal, specifically the ’80s. It’s a metal journey that sees new territory for Darkthrone, and SLUG discussed it with Fenriz in an email interview.

SLUG: To me, The Underground Resistance sounds like a straight-up metal record. There are actually a lot of things that feel very new for Darkthrone on the record, notably the guitars—there is a layered aspect to them, more bulk than a lot of other Darkthrone stuff. Also, some really great guitar solos among some really great riffs. What does the new record mean to you?
Fenriz: Still a continuation to the whole “We never got our own studio in late 1988, [but] we did in 2005 [so] we’ll continue that path we could’ve taken in 1988 now,” but that isn’t exactly it either, because we never have a mission statement like that or any other—we also don’t plan anything. I have succeeded [in] making more old metal songs and singing more songs with clear vocals this time. There’s nothing new under the sun here, but it is under the Darkthrone sun. A classical band that goes extreme or an extreme band going classical—I think either takes brass balls. We have added a touch more bass on every album since 1994, and now, with Jack’s organic bass-punch mastering, we are meatier than ever, I think.

SLUG: The new album title is interesting. One could say it’s about the underground scene being the resistance to canned musical garbage of popular form—or you could interpret it as you saying Darkthrone is resisting the underground. Which is it, or is it both?
Fenriz: [The title is in reference to] the French underground resistance during the war, which can only be interpreted one way: Someone is fighting the shitheads ruining their world. I’ve been fighting, myself, for the real metal [against music] that continuously tries to blemish our part of the metal world. Only it’s not territories we fight, we fight about taste, so therefore, the underground mindset is a fact. It’s not as simple as just countries. There are, as we know, great and shitty bands from each genre.

SLUG: Since Darkthrone doesn’t really tour, how important is it for your albums to sell?  How much emphasis is there on the physical format versus a digital release?
Fenriz: I really don’t know. My job never stops, but if one views a record as a project, my work kind of stops after the recording is mastered. The blueprint for the LP and CD are acknowledged and the interviews are done. Not much more I can do to sell. The important thing for us before everyone was on Spotify was at least to have good distribution, because I never wanted to push my music on people—it was enough that it was available. The sad thing about Spotify is the lack of info—it doesn’t say what member of a band wrote the song or who’s singing, etc. Apart from that, Spotify is awesome and it helps people from all generations to access new and old music faster and easier than before, ultimately giving people more open minds to music and more eclectic taste. Who will cultivate them, I don’t know. I had to cultivate myself, but then again, I’m a freak when it comes to music—the one that hears the most wins! Here in Scandi, now, CDs are worthless. It’s vinyl crazy here. There are more shops in Oslo selling vinyl than ones selling CDs.

SLUG: I’m kind of a vinyl nerd. What sort of media would you say is the best for listening to the new record? I feel like I’m missing something at the moment hearing it only digitally.
Fenriz: It’s up to everyone. It’s the bands that owe it to the world to get the best sound for metal, and that is and will always be the 1970s-inspired sound, with a little kick to it. No one, and I mean no one, needs more plastic or controlled or compressed sound. The most “advanced” sound needed for metal is Master of Puppets by Metallica or Piece of Mind by Iron Maiden. People thinking or saying otherwise only do so because they aren’t cultivated enough. Sorry, but the more you hear, the more time you spend loving and understanding something you are maybe only smitten with, and that will lead to the true sound, eventually.

Underlying all the responses I received from the always outspoken character in the world of metal, it seems that Fenriz, and the entity that is Darkthrone, are happy to do what they do. Whether you’re a fan of the band, a newcomer or one who has grown to disdain the band, you’re missing something if you don’t listen to The Underground Resistance. Whatever you decide—bang on!