Leave The World Behind: An Interview with SXSW Filmmaker Christian Larson 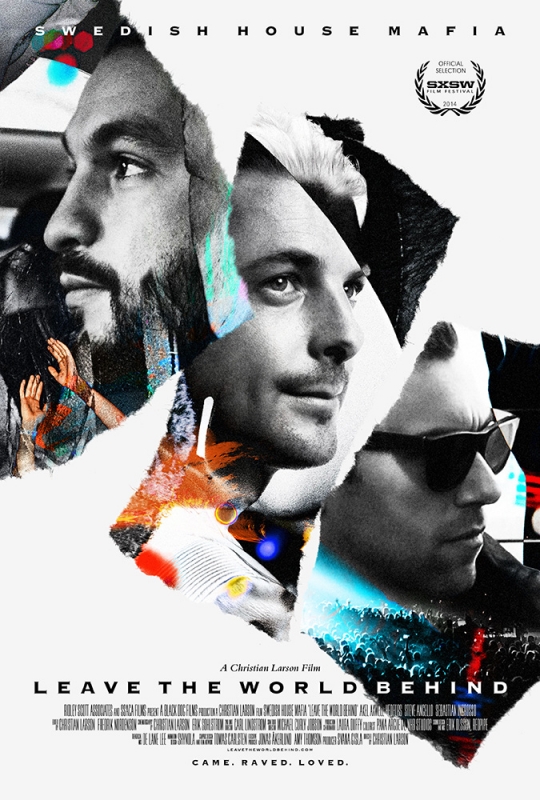 I think it’s safe to say there are many artists contributing to the music world that go underappreciated among the fans. Some of my biggest “know it all” moments come out when I hear people say things like, “Wow, this DJ does a great job with their visuals,” or “Miley’s ‘Wrecking Ball’ video was so weird, I don’t know how she came up with that” when in actuality, that credit should go to the artist in the projection booth or behind the camera. That being said, true passion for collaboration and subject matter is demonstrated in director Christian Larson’s new documentary Leave It All Behind, a film following Swedish House Mafia on their farewell tour around the world. SLUG was able discuss the film with Larson just prior to the its world premiere on March 12 at this years’ SXSW festival in Austin, Texas about the inspiration behind the film, and how working with the band from the start of their career helped to make the final documentary so personal.

SLUG: Leave The World Behind is having its world premiere this month at SXSW, how long have you been working on this project?
Christian Larson: It’s two parts. I met the band in ’06 when I was pretty new as a filmmaker. I got into the house music scene and I dragged my girlfriend at the time to Ibiza because I heard there were great DJs and bands. I also realized when I was there that there were only logos and names and not really any personalities brought forward, and I wanted to get more of the actual DJs. I heard there were some Swedish DJs playing there and I hadn’t heard of them. I met them later that summer at an after party and they had such personalities that were contrary to the way they were promoted. As a fan of that scene, I wanted to know more about what they were like. That was kind of my proposal when I asked if I could film them. From then on, I made a short documentary about them called Take One. A few years later in 2012 they called me and said they were breaking up and going on tour again, and asked if I wanted to film them.

SLUG: What was it like working with them from the start of their career to their last project?
Larson: The documentary was sort of like a natural thing for them, I think. I was there in the beginning, so I kind of had to be there in the end. It’s interesting because it kind of forms a dramatic arc in the film that [the story] has a beginning, middle and end.

SLUG: You were there to see them evolve both in their personal lives and in their music, how did that influence the production of this film?
Larson: I think the difference⎯or just my experience with the transformation of them—was that in the beginning the energy was different, but at the same time they were comfortable with the camera towards the end so it was almost like they were more honest towards the camera than towards each other. I could see how they changed over time and I wanted it to come across in the film. In the first act of the film, the energy is very happy and funloving⎯which is exactly how it was when I first met them. In the second act you can see how they were questioning whether its what they wanted to do. Then the last act is really showing the realization for them that they’d had families and stopped partying, and although they loved their music, they wanted to leave it the way it was.

SLUG: I could see that, definitely, when I watched the film. There were some really personal scenes. There was some footage of the band in Australia when they were there producing Don’t You Worry Child, was it always going to be a film about their breakup?
Larson: That was pre-breakup. That was a year before they went on the tour. I met them early at the time they were taking off. Organically, my filming of them was kind of like a part of the nature of the band. When they went to Australia, it was sort of just a phase of our stuff—they just said, “Christian, we should film down in Australia and who knows what that’s going to be,” and it ended up being part of the film.

SLUG: The film was really interesting to me in that it didn’t necessarily double as an advertisement for dance shows—some of the footage showed the crowds getting out of control. What made you want to include that in the film?
Larson: I wanted to make the most honest portrayal of the shows that I could. For me, the shows that the band did⎯and maybe EDM shows in general⎯it’s sort of like a musical. Even though it is house music, it has a dramatic build and it plays on different emotions. For the music numbers in my film, I wanted to show a musical part that represented all of these different emotions. I hope that I included everything that I felt is a part of the show. Also the people at the shows were sort of the core. I shot them and I didn’t want to only show people smiling, I wanted to feel their real emotions. I feel it’s an honest portrayal of how the show feels. I was also very keen on the editing technique to try and make it feel like you were at the show. I tried to use very sharp cuts and keep the sound that the camera picked up at the show vs. playing something over it. I got as close to the real experience that I could potentially .

SLUG: What was it like to see the band’s popularity grow in contrast to when you filmed their first documentary?
Larson: It was fascinating. The band grew really because of their popularity and the demand to grow. It even shows in how the last tour was promoted, [it wasn’t advertised extensively and] the demand was there and it kind of shows the engagement of the fans. Of course, that wasn’t the case with the first film or the first year that I met them, so it’s really amazing to see how such a massive crowd can grab onto that—like how Madison Square Garden sold out in two minutes and they added a show at Barclay Center and that sold out, too—it’s nuts.

SLUG: When can we expect a full release of the film?
Larson: It is to be announced exactly how we do it with the theaters. We’re aiming to do a compressed release because it’s about a band that’s broken up and it sort of has “best before” dates. I wanted it to come around a year after the final show. The day after the premiere at SXSW it plays in a bunch of theaters around the world: New York, LA, London, Amsterdam and a bunch of places in Europe, and then Sydney and Melbourne. It will go up in a bunch of cities later on. For the US, we don’t know yet, but the plan is that it will go up in theaters and then be available digitally shortly after, so it won’t be very long of a wait.

Aside from working with Swedish House Mafia, Larson has directed quite a few music videos for them and other various electronic artists such as Nero and Kylie Minogue. In addition, he also won a Swedish Grammy for the short film Valtari, which he made with the Icelandic post-rock band Sigur Rós. Larson is currently working on various other projects involving music. You can view the films trailer and find out about release information here. Unfortunately, Salt Lake City isn’t on the list of lucky places that will get advanced preview screenings, but hopefully we might see it in Broadway Centre Theatre soon and if you’re at SXSW in Austin, the world premiere is Wednesday, March 12, 6pm at the Paramount Theatre.