Lightning Strikes in Salt Lake: An Interview with Joey Arias 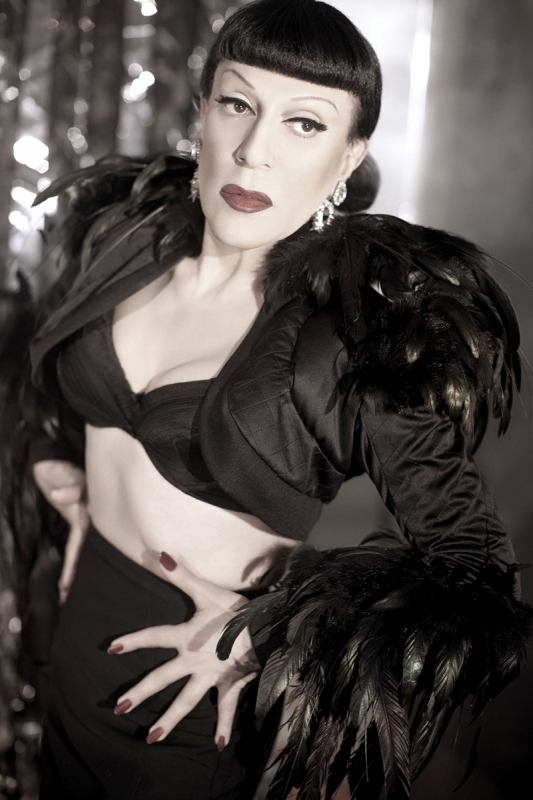 New York City cabaret/performance art/drag icon Joey Arias is performing in town with fellow East Village art scene veteran Kristian Hoffman as part of a West Coast tour called “Lightning Strikes.” Borrowed from the title of German countertenor Klaus Nomi’s song, the tour marks the first artistic collaboration between Arias and Hoffman, who were both friends and collaborators with Nomi before his untimely death in 1983. Since his time in New York’s art scene in the late ’70s and ’80s, including a performance with Nomi and David Bowie on Saturday Night Live, Arias’ has worked with fashion legend Thierry Mugler, master puppeteer Basil Twist, Cirque du Soleil in Las Vegas and many others. Arias will be performing with Kristian Hoffman Feb. 28 at Urban Lounge in Salt Lake City. I spoke with Joey about trending performance art, Z chromosomes and alien pop stars.

SLUG: The first time I encountered you was performing with David Bowie and Klaus Nomi on Saturday Night Live and as a star amongst the Club 57 crowd in New York City in the ’80s. What was that like?
Joey Arias: It’s like aliens meeting each other, different planets coming together. It was an encounter that was almost like a kinship––we kinda belonged together. It was very exciting because you know [Bowie] was our rock god. At the same time, we were doing our thing and Bowie was in all of us, so everyone was in awe of each other and it was just great. There was no pretense, it was all very real and fantastic and fun. The first 24 hours were a little nerve-wracking, but he made us feel very comfortable.

SLUG: Your current tour is called the “Lightning Strikes” Tour. Is the tour a tribute to your friendship with Klaus?
Arias: That was Kristian Hoffman’s idea for Klaus to do. Klaus created his character and was doing the aria and didn’t have any intentions, of doing rock and roll. Kristian put a band together and told him these are the songs you’re gonna do: “Lightning Strikes,” “The Twist,” “The Nomi Song,” “You Don’t Know Me.” That’s where Kristian got his cue from. I asked him, “So what’s the title, and I said Lightning Strikes! How appropriate!

SLUG: What can we expect from the show?
Arias: You can expect original material that I’ve written; obviously some original songs that [Kristian] wrote for Klaus, maybe some of his original tunes; some Billie [Holiday] classics, some storytelling. We’ll be coming live to you. Kristian is a pianist, a composer, all of that. He’ll be playing piano and maybe some synthesizer and I’ll be singing. Piano and vocals are very pretty together. Two New York legends, art personified. It’ll be like going to church at CBGB’s!

SLUG: How did it the tour come together?
Arias: After we contacted Earl Christian I happened to be in Los Angeles during New Years, so I went to his home. We sat and pulled a set together and talked about what we we’re going to do. Kristian is getting the music under his belt, I’m preparing to sing the songs. I have this residency here at Joe’s Pub in New York––I’m trying some of the songs to see what they sound like. And then I meet Kristian in California, we have a week to prepare, rehearse the music, go over the stuff and the rest of the magic happens as we get there!

SLUG: Salt Lake isn’t really known for its performance art scene. Why did you decide to tour through here?
Arias: The ball started rolling, and our dear friend Michael Sanders got involved. He’s been living in Salt Lake for about five years now. Why not Salt Lake City? People are people. I like to go off the track of Paris and London and Berlin and Stockholm and Sydney. Of all the obvious places, it’s great to go to Salt Lake City. People say Mormon, yeah … More Men!

SLUG: The Utah Pride Center and its supporters are pushing for the Bill for Equality, and in addition to your performance, you’re also here to support their cause. What are your thoughts on gay marriage, and do you ever use your performance and your fame as a platform for political issues important to you?
Arias: It’s so 19th Century, you know. The world’s way too small, everyone’s got to learn to live together. It’s all about the planet Earth and people and sensitivity. Everything’s natural. You go to a garden and there’s all these different things. There’s all these different kinds of flowers and there’s weeds, everything’s meant to be. That’s how life is also. There’s gay and lesbian, there’s a reason for that, and there’s a heterosexual population, there’s breeders and no breeders. We’re not in caveman times anymore. I don’t use the show as a platform for politics, per se. I don’t have to say it too much. It’s what I say and I do already as a given. I don’t have to be like, “And now this is a song about gay rights!” I might say something about that, but you know, it all depends on what the room gives me. I always have it in my mind, it’s like a file, it all depends on what I’m doing and if it comes out, it comes out. I think it’s an obvious situation when I’m there. I don’t like to preach. You come to a show because you want to get lost and dream and go somewhere. A song will do that for you.

SLUG: What are your thoughts on the performance art scene today, particularly in the wake of Lady Gaga and RuPaul? Do you feel that it’s become trendy? Do you have any advice for up and coming performers?
Arias: It’s nice to see a new generation looking at that and inspiring to do that, experimenting and trying––different variations of ages and people doing art. There’s a lot of performance artists, a lot of people doing their thing. You can go down a list naming hundreds of people. It all depends on where you’re at. A trend will always be a trend. But when I say trend it’s like a circle, in style/out of style, trend/no trend. You just gotta believe in what you’re doing and do what you do. I don’t believe in what a trend is, you gotta do what you do.

SLUG: What are your plans after the tour?
Arias: I’m working with Mister Mannfred Thierry Mugler on a Joey solo show, which is like a big, big show––a touring show with sets, costume changes––a real show. That’s the big one we’re working on––it’s called Z Chromosome: The essence of Joey Arias. I’m not X nor Y. People say, “Oh, you’re a drag queen.” No, I’m a Z Chromosome. Even though I use the element of drag I’m not a Queen. I’ll start recording when I get back. Then I’m supposed to go to Mexico for eight days, then to Paris for a meeting about another big show. I’m going to Australia for a month. I’ve got gigs planned everywhere.

For a national treasure like Arias, performance isn’t something you do, it’s who you are meant to be. Come discover your inner Z chromosome with Arias and Hoffman, Feb. 28 at Urban Lounge in Salt Lake City.