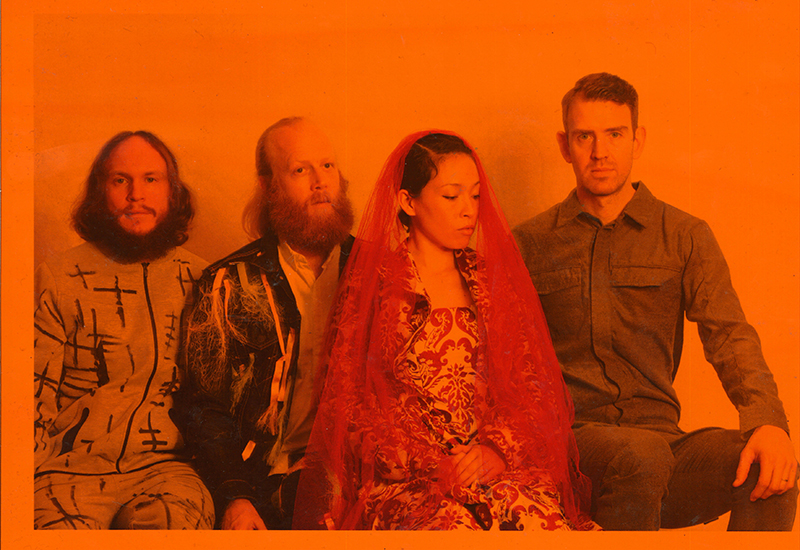 In their latest full-length release, Season High, Little Dragon ask you to get lost with them.

A typical day for the band consists of walking around their quiet and gray Swedish hometown of Gothenberg, dreaming of other places—both real and imagined. There’s something counterintuitive about visualizing the vivacious and colorful pop stars hunkered down in a sleepy winterscape, but the perimeters equate to ultimate creative freedom for this group.  Freud asserted that life was unbearable without fantasy, and Little Dragon exemplify this concept musically. In the glimmering new track, “Celebrate,” Yukimi Nagano croons her escapist sentiments, “Let love drip / Lose your grip.” The group is heading out an extensive tour and will be bringing their freshest hits to Salt Lake City’s popular Twilight Concert Series on July 20.

With other track titles including “High,” “Push,” and “Gravity” the group is not only time-traveling in their compositions on Season High but exploring space and dimension as well. There is as much white space as there are magnetic beats throughout the course of the album. Though not written as a cohesive collection, the songs can feel like individual chapters in a sci-fi novel. “Butterfly” and “Don’t Cry” are  Sade-esque soulful slow jams, while “The Pop Life” and “Strobe Light” are bass-heavy, intergalactic dance tracks. ““There is something for everyone,” says bassist Fredrik Källgren Wallin.

“Relief, pride, excitement and also a little bit of nervousness,” says Wallin describing the emotions that come with a highly anticipated release. “On this album, we took a long time trying to collectively decide when it was finished.” It comes as no surprise that Little Dragon can get fully absorbed into the worlds that they create musically and have trouble knowing when to come back to Earth. To keep from fully floating away, the band hired legendary British producer James Ford (Arctic Monkeys, Foals, Mumford & Sons). “It felt a little bit different. It was more of an up-and-down process because we worked longer on the album and brought in [James Ford] to collect ideas and try stuff out.” This was the first time the band had worked with an outside producer, though Wallin points out that it was a beneficial experience to all parties involved—including their fans and listeners.

Little Dragon have released two teaser music videos for Season High, which fans have likely already devoured. Directed by Ossian Melin, “Sweet” is a surrealist treat, with psychedelic imagery of cotton candy intertwined with everyday footage of Sweden. Nagano spoke to a BBC radio host about the track and noted, “It just started with a drumbeat and a pretty heavy bassline, that kind of spoke for itself. It was a track that everyone thought was defining for the record. It’s basically a dance track. A song about being addicted to a certain feeling of high, not necessarily drug-related, but anything that makes you feel high.” The video for “High” is a slightly more literal play on this idea, cheekily ending exactly at 4:20 and featuring a seductive clip of Nagano singing, “Roll another one for me.”

Little Dragon met in high school in the late ’90s and have been making music together ever since. Season High is their fifth studio-released album, though the group has been featured on tracks with Gorillaz, Mac Miller and De La Soul. Their music is a colorful fusion of pop, trip-hop, soul and rock that Nagano carries out with her gripping vocals, that lands somewhere between Nina Simone and Björk. Little Dragon’s albums have bled into each other over time, from their stirring self-titled debut to the explosive rhythms of Nabuma Rubberband and now the irresistible, summery tracks of Season High. The band has worked out most of the kinks that come with being both close friends and professionals on a daily basis and mention that the best way for them to respect each other is to talk about any annoyances that arise immediately.  This is another way in which escape becomes important to Little Dragon, as they continually plunge into creative endeavors together, year after year.

“Music is our work in one way but it’s also our passion and our drug,” says Wallin. “It hopefully makes us forget about every day life.” The band looks forward to touring new cities such as SLC, because each venue brings an entirely different energy. Wallin says that he enjoys experiencing good scenery, good food and meeting new people everywhere they go, but the true joy is sharing their songs in a very real with fans in the crowd. They don’t find a huge lighting budget or much fancy equipment necessary to create a captivating visual and audio performance, relying instead on the addicting nature of their songwriting.

As they take the stage, Little Dragon hope to take everyone in the crowd with them on an exhilarating mental vacation. Wallin says coyly, “We all love to dance.” Come ready to move and be moved on July 20 at Pioneer Park.