SLUG Mag Soundwaves
Episode #403 – Mykah
00:00 / 21:59
Spotify Stitcher
RSS Feed
Share
Link
Embed
Years before Trent Nelson became Chief Photographer for The Salt Lake Tribune, he was shooting photos of Salt Lake City punk rock shows. Some of the most compelling images from his 1998 collection at trenthead.com are of the Salt Lake hardcore band Clear, due to the sheer emotional intensity that appears to be pouring out of each member.

Loud and Clear: The Life and Times of a SLC Hardcore Band 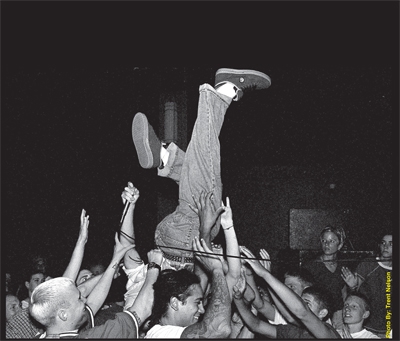 Years before Trent Nelson became Chief Photographer for The Salt Lake Tribune, he was shooting photos of Salt Lake City punk rock shows. Some of the most compelling images from his 1998 collection at trenthead.com are of the Salt Lake hardcore band Clear, due to the sheer emotional intensity that appears to be pouring out of each member.

Singer Jason Knott recalls what it was like performing on tour in those days: “I felt like my soul was leaving my body most of the time. Just everything comes out of you. After you’re done, every muscle in your body hurts, and your neck is killing you, but you’ll do it again the next night, and just as hard, if not harder, ’cause that’s just what it makes you feel like doing. It’s a huge release.”

Another striking aspect of Nelson’s Clear photos is the way the members appear to be interacting with each other. They are shown jumping in tandem and criss-crossing one-another’s airborne arcs while playing instruments.

Knott agrees that the energy onstage was something that they created with each other … and also by interacting with the audience. “I never really wanted to talk to too many people about it because I thought they’d think I was a hippie,” Knott admitted, “but the second we started playing, it just got built up in this huge circle, and it’s like we threw it out at the crowd and that energy just got bigger and bigger, and the next thing you know, it’s just going through the whole room and the crowd’s just a part of the band.”

Knott’s former bandmates laughed in agreement after Knott’s last comment. It was Feb. 10, 2007, and it was the first time in seven years that they were all in the same room together. They’d gathered to practice for a Feb. 16 reunion show, arranged by SLUG to celebrate the magazine’s 18th anniversary. Now in their late twenties and early thirties, the former members of Clear found themselves telling each other things they never managed to say when they were bandmates just out of their teens.

Guitarist Mick Morris said, “Right after the last show, I was like, ‘Fuck, I love this band so much, and it doesn’t really feel like it should be the end, but it is.’ “

“Yeah, that’s the same thing I felt!” exclaimed bassist Sean McClaugherty. “We never talked about that, but I felt that way, too.”

Second guitarist Josh Asher agreeing, said, “All these guys, I love them. I can go years without seeing them, and [we remeet and] it’s like time hasn’t passed.”

Drummer Tyler Smith wasn’t yet in the room, but he later said, “We can not-talk for a while, but we’re still super-close. I love those guys. I always will.”

When Clear called it quits in 2000, many of their fans were stunned. The band had recently released an album on Stillborn Records (the label started by Jamey Jasta of the band Hatebreed), and had completed several national tours in support of the record. They were the only Utah hardcore band well-known out of state, and seemed poised to make it big.

“We were right there at the threshold, where we could have broken through,” Sean said. “We could have really done a lot of tours if we’d stuck with it. Hardcore got huge. Kids that played in bands that we played with ended up in bands that became huge and on MTV and make their living doing that.”

So what happened? Why did five guys choose to walk away from a successful project with some of their closest friends?

The fissure could best be attributed to growing pains.

Clear was formed in 1995 and was originally known as XclearX; the letter x serving as a symbol for straight edge. Often associated with hardcore music, Straight edge (in the mid-1990s) was a fusion of heavy punk and heavy metal, and that’s the sound that Clear produced. When the band began, Jason was 21, Sean was 19, and Tyler was just 16. The original guitarists would later be replaced by Mick and Josh, who fall in the same age range.

In 1996, six months after forming, they released a 7” record called The Sickness Must End, which they supported with a national tour. Tyler was 17 then, and, as he explained in a phone interview, it was an eye-opening experience for him. “I was traveling the world and pretty much living on my own with no money, and having these guys look after me,” he said. “And they were young, too.”

During the time that Clear was at its peak, Utah’s straight-edge scene had a reputation as being one of the most violent in the country. In 1998-1999, Salt Lake City was receiving national media coverage for an alleged straight-edge attack on fraternity members. The members of Clear said that hardcore music fans who weren’t straight edge were often afraid to come to their shows for fear of being attacked. However, Clear tried to reach out to everyone.

“We always tried to promote an embracing experience and get as many kids out as we could,” Sean said. “[When] fights would break out … we would stop playing. So all the kids that tried to channel hate through hardcore weren’t OK with us.”

Disintegrating from the Inside Out

In 1999, the band recorded a full-length CD, Deeper Than Blood, under the name Clear. After two national tours to support the record, Josh decided to leave the band to pursue his own indie-rock project, The New Transit Direction.

“I always felt like we probably could have kept going pretty strong if we’d never lost Josh,” Jason said. “Because when this kid came and played with us for the first time … you know that feeling that you get when everything clicks?”

A replacement second guitarist was added, and another tour followed, but then Mick announced that he, too, was leaving the band. He said they no longer seemed to be able to write music together. While things looked great on the outside, they’d only managed to write two new songs in eighteen months.

Sean said, “Mick wanted to be more metal, Jason wanted to be less metal, and [Josh] wanted to be more indie rock.” Sean and Tyler were gravitating toward stoner rock. Once Mick announced that he was leaving, the rest of the band decided not to continue without him. Tyler said, “I didn’t have the energy or the desire to … find another guitar player and teach him the songs, especially since for the year before that, we wrote like, one song.”

Clear played their last show in 2000, in the basement of DV8 to an audience of approximately 300. “It was an amazing show,” Sean said. “We had a great time, kids were in into it, we played everything we had at the time, and when it was over, it was like … that’s it. It was kind of anticlimactic, you know?”