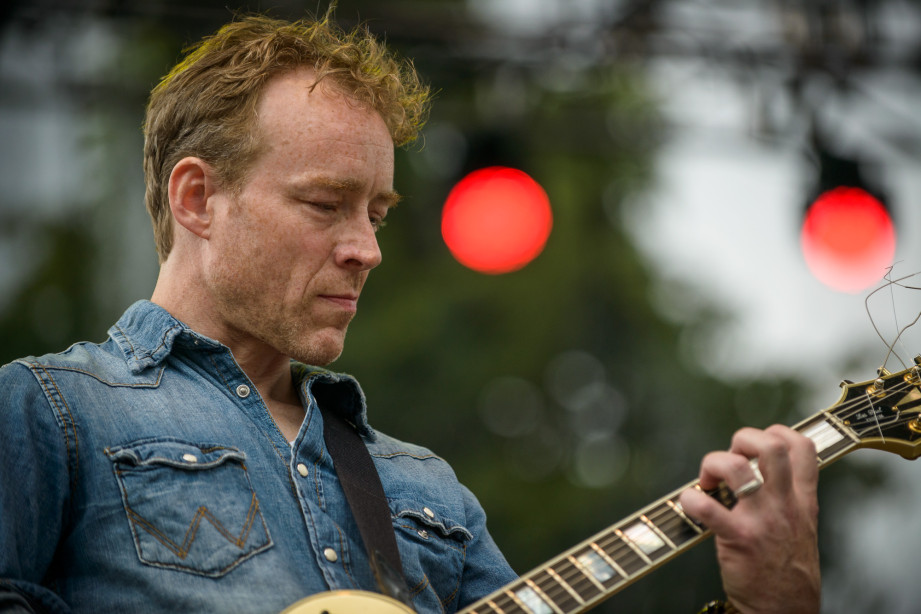 How Low Can You Go: High Times with Alan Sparhawk of Low.

[Alan Sparkhawk of Low] “I don’t know if that’s specifically the new direction. Going out on a limb was definitely a positive experience, and I think we’re going to do that more.”

Moses spoke with G-d, George Bush held private council with Pope John Paul II, and I, your lowly SLUG writer, had the opportunity to meet with (in person) Alan Sparhawk of Low. OK, it’s not my intention to deify Mr. Sparhawk, but let’s just say, he’s well-respected in my eyes. Alan’s other band, The Black Eyed Snakes, who, by the way, sound nothing at all like Low (check out our interview with them on the SLUG website, www.slugmag.com), were here in January and I jumped at the chance (literally) to speak with Alan about Low’s new album, The Great Destroyer, which was released on Sub Pop on Jan. 25. If you are familiar with Low’s older material, The Great Destroyer might catch you a little off-guard, but in a good way. The new album is full of rich textures, loud, distorted choruses, and songs that when compared to older Low materiel, are downright aggressive and fast. Yes, that’s right, the band that helped pioneer the “slowcore” genre of indie-rock have written some songs that you can tap your foot to.

Low’s last album, Trust, marked the beginning of the subtle change in direction that The Great Destroyer embraces from the first song to the last.

“This record definitely pushed the limits of out abilities,” says Alan. “It’s a new challenge.” Alan noted that when Low was in the studio last year, the songs that were working the best were the “more aggressive and louder songs.” When I asked him how he feels about Low’s new sound, he reluctantly replied, “I don’t know if that’s specifically the new direction. Going out on a limb was definitely a positive experience, and I think we’re going to do that more.”

Low’s music is extremely personal, and after 11 years, it should come as no surprise that Low’s sound has evolved just as its members have.

“Everybody grows,” says Alan. “From one year to the next, you’re going to be a little different. Sometimes you really are a completely different person just two years later. The last couple of years have been the most intense in my life. I’m surprised as hell that we were able to pull off a record during that time, much less a record that I’m really happy with.”

Alan and his wife, Mimi, who plays drums for Low, recently had their second child, which might explain the vehemence in Alan’s life. Time, it seems, is the creative impetus behind Alan Sparhawk’s music. “In the past, records have been a struggle, being short on time, everybody having different ideas, but on this record, we had enough time.” And it shows. “After 11 years, you think, ‘Well, we can do whatever we want. We’ve been doing this long enough.'”

This time around, Low had the opportunity to work with Dave Fridmann (Flaming Lips, Mercury Rev, Sparklehorse), who co-produced The Great Destroyer with the band. Traditionally, Low is known for having abundant open space in their music, which gives the trio immense harmonic berth to work with. Production on The Great Destroyer, however, gives the album sweeping layers of concinnities that fill every void and crack of the music in an avalanche of noise.

Alan confessed that Low has been talking to Fridmann for years about working together, and that until last year, their conversations remained fruitless. I asked Alan what it was like to work with Fridmann, to which he replied, “It was great. I’ve been a fan of his stuff for a long time. Wayne[Coyne] from the Flaming Lips suggested that we should work with him. He has definitely been on the short list of people we’d like to work with for the last few years.” The Great Destroyer marks the band’s second label change. After spending seven years with Chicago-based Kranky, Sparhawk et al. decided Sub Pop was a better fit for them.

“Ever Since Trust, we’ve kind of been thinking that maybe we need a more appropriate situation for the records we were doing,” says Sparhawk. “We’ve been getting busier and things have been growing.” Last year, after 10 years of self-management, Low finally got a manager. Their new impresario started talking to different labels around the country. Alan rolled his eyes as he told me how a few “big” labels approached them, but as Alan described it, “It’s very obvious that we’re not a major label band.” Halfway through recording The Great Destroyer, they were approached by Sub Pop, and decided that it was simply “the right step.”

“No matter how much you think it’s just about writing songs and doing your art, you still gotta figure out what the best way to do it is,” says Alan. “It’s like making toast. If you’re going to make toast, why not use a knife and a toaster instead of an iron and your finger, or whatever. If you have the chance to use a knife, let’s do it if it makes things easier, because really, what it’s about is making toast.”

Alan described the new material as being “really raw” live. “We like playing live, we like making records; the goal is to make them both as good as we can”- a goal that they have met with success for over 10 years. Low, who comes through Salt Lake on every tour, will be playing at the Velvet Room on Mar. 21.