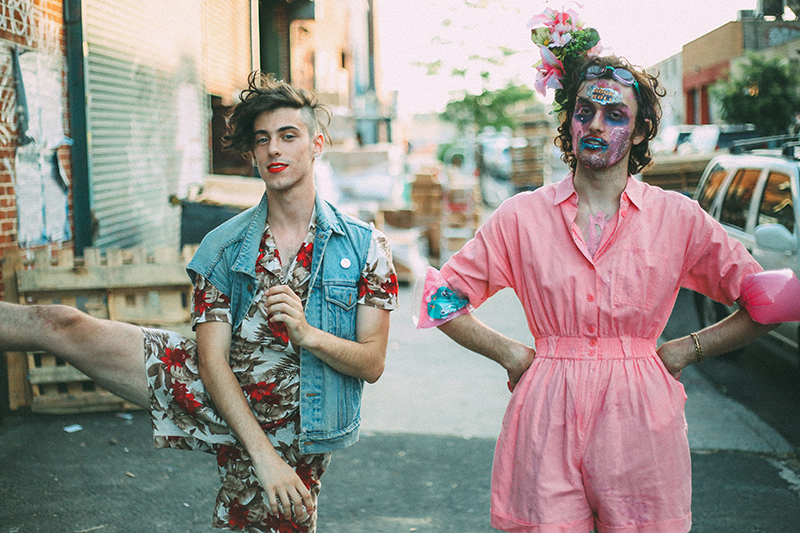 Last October, I had the pleasure of reviewing PWR BTTM’s most recent album, Ugly Cherries. I was entranced by the New York band’s ability to create a sonically complex sound with only two members—vocalist/guitarist Ben Hopkins and vocalist/drummer Liv Bruce—and their dedication to addressing queerness and gender identity with absolute frankness and a certain amount of humor. I have kept my eyes on them ever since. Recently, I had the opportunity to speak with Hopkins about BDSM Magazines, drag queens, certain concerning mentalities in Alabama and bitchy cats, among many other things. And here I stand, much better for wear.

SLUG: What was the first moment that music meant something to you?
Hopkins: My first memory with music was sitting in a car seat listening to “Walkin’ After Midnight” by Patsy Cline and thinking it was the most beautiful sound I had ever heard. I will always think of that song in the most dramatic way.

And, I saw The Blues Brothers (1980) when I was six. I remember being like, “Is that what it means to be in a band”’—it’s funny and it’s a band and it’s cool and they travel around and do all this crazy shit. They break out of jail, Ray Charles shows up, Aretha Franklin—holy shit! What a good time! It has the best car-chase scene in any movie. They pile up like 50 cop cars. It’s just amazing. Yeah, The Blues Brothers really opened it up for me.

SLUG: How did PWR BTTM get started?
Hopkins: We didn’t start playing music until the second semester of my senior year at Bard College, which was like two years ago. There was a queer music showcase that was supposed to be happening at Bard’s, and Liv was like, “Oh yeah, I want to start a band for that,” and someone told Liv to ask me. Even though I didn’t really know how to play guitar, I used to tell everyone that I did, then Liv asked me to be in the band, I taught myself how to play guitar, we wrote some songs and started PWR BTTM.

SLUG: Can you tell me a little about your local music scene? Favorite bands back home?
Hopkins: We came up in Upstate New York and lived around there. So we met a lot of our really good friends, like Diet Cig, who are another two-piece from Upstate New York. The scene at Bard’s is amazing because there are two student DIY spaces there where bands would come through and play. I saw the band Porches like 10 times in college—it was amazing. But then, in New York City, our scene there is the DIY scene that we’ve moved more and more into since last year.

In terms of the bands from New York, all the members of The Epoch are incredible, T-Rextasy—their record [Jurassic Punk] is gonna make everyone shit themselves because it’s so fucking fantastic—and Attic Abasement from Rochester, New York. Because we travel so much, now it’s kind of like our scene is on the road. I feel like all my favorite bands are from all over the country. The scene is our fucking mini-van.

SLUG: You are currently touring in support of your recent release, Ugly Cherries, and even stopped into SXSW. What has been your most eye opening experience on tour thus far?
Hopkins: Touring everyday is a crazy privilege. But there are a lot of really crappy geographical biases in the world, like, “No one listens to PWR BTTM in Alabama.” Listen, queer people [listen to PWR BTTM], straight people listen to PWR BTTM, people listen to PWR BTTM. But the people often [make] is “There are no queer people in Alabama.” So it’s amazing for us to play in Alabama. When you’re queer, you are instantly a part of a community just by virtue of existing in this way publicly. There are queer people in every single city in every country on earth. So don’t be a dick, people—just [know] there are queer people everywhere. If you want an eye-opening experience, that’s what it was.