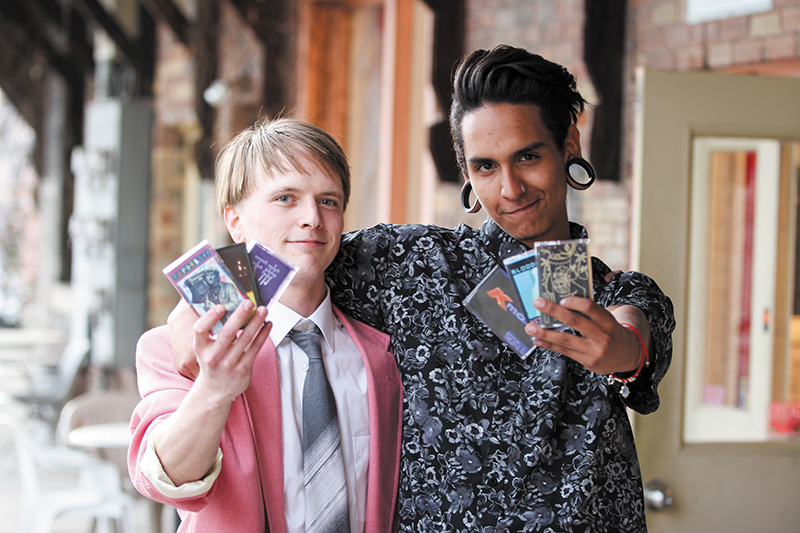 Luxury Sky District: Combining Digital And Analog One Tape At A Time

For most of the music industry, the idea of cassette tape production is outdated and antiquated. Many artists these days seem hesitant to even release hard copies of albums at all, preferring to sell downloads on iTunes, Bandcamp or music-streaming services. We have entered an era where music has become almost completely virtual: growing, blooming and dying solely online. However, for Jack Murphey and Eric Delgado of Luxury Sky District, the art of the cassette tape is not dead, but something that should be celebrated. Luxury Sky District began in August 2015 as the brainchild of Murphey, a local Salt Lake City musician and lover of the electronic music genre vaporwave. Originating online in early 2010, vaporwave music uses slowed, deconstructed 1980s synth sounds and samples, combined with modern drumbeats and bass. Although it has been slow to gain popularity, there has been more and more interest in the vaporwave genre and aesthetic in the past year. Commenting on how vaporwave music has changed as of late, Murphey says, “I’ve noticed it start to step away from the computer screen, which is good, because it’s almost been entirely virtual until now.”

According to Murphey, vaporwave music as a whole “has a sense of nostalgia, but still has a sense of the present,” which mirrors the unique way that LSDistrict is releasing music today. Every single artist’s work that LSDistrict releases is available on a handmade cassette, which Murphey and Delgado record and mix. Unlike digital music, which can be copied in a matter of seconds, the cassette production done by LSDistrict is done in real time. “We record our tapes one by one,” Delgado says. “Say we do a release and we have to do 50 cassettes: That’s 50 hours that we have to spend recording.”

Although the release of cassette tapes is laborious and time-consuming, Murphey says that it is worth the effort. “Tapes are a lot more personal than CDs,” he says, “and [they] appeal to a wide range of audiences.” From older music listeners who feel a certain nostalgia for cassettes to younger people looking to purchase something that is more gratifying than a download, the formatting of tapes does not seem to be thought of as “old.” Rather, they treasure the process of creating tapes—taking the time to record a tape, choosing the color scheme and making cover art. Murphey and Delgado work hard to create original Vaporwave-style cover art, including old-school 3D imagery, bright neon colors and Japanese Kanji lettering, bringing back the idea that people are paying for something that is tangible. Like painters and other artists, Murphey and Delgado are able to shape their vision through their own unique medium. For Murphey, the goal for LSDistrict is to produce higher-quality tapes for lesser known artists and to give back to independent producers who would not usually make much money or be recognized. “I wanted to create an atmosphere where I could help people get their music out, aside from just on their computer,” he says. “I wanted to help them get a physical copy of their goods.” To Murphey and Delgado, the work does not go unnoticed. “Some of the messages I’ve gotten back about how it’s made people feel is heartwarming,” says Murphey. “The stuff people will write you makes it worth it. “

Although LSDistrict is based in Salt Lake City, most of the actual orders placed and artists featured on the label are from other countries. “I have hundreds of followers from all over the globe,” Murphey says. “I’ve shipped to Japan; I’ve shipped to Ukraine, to Brazil, Australia. I think the only two continents I’ve never hit are Africa and Antarctica.”

As far as doing local shows and featuring local artists, LSDistrict is moving forward—cautiously. Currently, there are only two other local musicians other than Murphey and Delgado that are featured or signed to LSDistrict. When asked if he would ever do a show as his musical alias, Wolf Smoothie, Delgado says, “We’re still trying to figure out how people would react to it, because it’s such a new genre. Here in Salt Lake City, we would have to feel it out and see if there would be an audience.”

Wolf Smoothie most definitely stands out within the typical electronic music scene. “When I joined LSDistrict, I felt like it was a good way to do my own thing,” Delgado says. “I’ve been producing music for seven years now, and I’ve always tried to get into these cliques. It’s been hard to meet people who have similar interests to what I want to do.” Collaborations are on the way with more artists in the local Salt Lake area, but both Delgado and Murphey seem content with doing their own thing and paving their own way for the time being. “In Salt Lake, everybody tries to stay in one little box,” Delgado says. Luxury Sky District, however, is breaking down those boxes, one tape at a time.