SLUG Mag Soundwaves
Episode #403 – Mykah
00:00 / 21:59
Spotify Stitcher
RSS Feed
Share
Link
Embed
It saddens me to think that there are people in this world who have never heard of That 1 Guy (a.k.a. Mike Silverman) before. It saddens me much in the same way as when I find out that the newest karaoke-winner on American Idol has released their debut album and it opens at number one on the charts.

Magic and Friendship with That 1 Guy 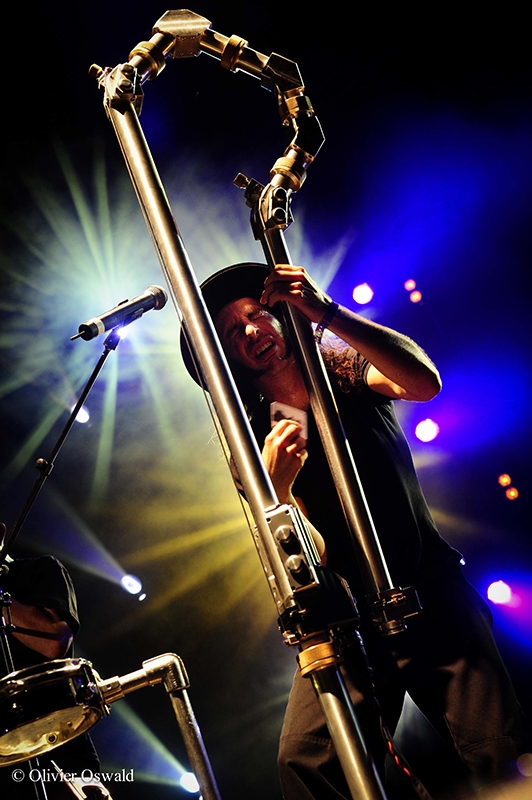 Mike Silverman plays a myriad of strange instruments in his one-man music project, That 1 Guy. Photo: Olivier Oswald
It saddens me to think that there are people in this world who have never heard of That 1 Guy (a.k.a. Mike Silverman) before. It saddens me much in the same way as when I find out that the newest karaoke-winner on American Idol has released their debut album and it opens at number one on the charts. However, do not fret if you find yourself in this category of the uninitiated, as you can rectify this issue at the Urban Lounge on Sunday, March 22 at 8:00 p.m. when Silverman and his 7-foot Magic Pipe play a show that he claims is “The likes of which ye haven’t yet seen.”
Silverman began his alter-ego, That 1 Guy, in 1996 with the release of his album Let’s Hear That 1 Guy. From there he has released five solo studio albums—the most recent on which being 2014’s Poseidon’s Deep Water Adventure Friends—one remix E.P., a live DVD and an album with Buckethead under the name Frankenstein Brothers. His music—a mix of funk with some elements of jazz/rock fusion—is never boring, and neither are his performances.
Accompanied by the “Magic Pipe,” “Magic Boot” and “Magic Saw,” you never know exactly that to expect from a typical That 1 Guy performance. The Magic Pipe is a 7-foot wonder complete with two bass strings, a series of trigger points located at strategic positions all over it, and a series of foot-pedals that allows Silverman to perform a multitude of rhythms and sounds that come together in a complete orchestra that sounds like a hybrid of Cameo and early ’80s Herbie Hancock with hints of Captain Beefheart and lyrics about things like laser beams. Although it is a great piece of eye-candy, to Silverman, the music is still the key component—one he chose to focus on during this tour. “I felt like some of the visuals [on prior tours] were distracting a bit from the music,” he says. “I just thought I’d try this [tour] with just the music.”
One thing that he did want to do, as part of the song selection of the show, was to keep it cohesive and have a theme throughout. “I try to make it more of a theme thing,” says Silverman. “I think it kind of is just by default because the songs from the Poseidon thing are weaved into the show, kind of throughout. So, I kind of keep bringing it back to that energy.” He did inform me that he will also be performing his recently-released single Bomb Dignity, as well as songs from throughout his catalog, pleasing both new and old fans alike.
As excited as you should be to witness the spectacle and musical treat that is That 1 Guy, he shares the same feelings about Salt Lake City. “I just think it’s one of the most beautiful places in the world” says Silverman. But there’s also one more very important thing that he enjoys about the capital city. “I go to the Red Iguana all the time” he says. “It’s a serious stop for me.”
But more so than even the surroundings he enjoys, Silverman will tell you that playing for the people in Salt Lake is what he enjoys most. Whenever he plays live, he always refers to the audience as “friends.” “I genuinely feel like everybody there are my friends for real” says Silverman. “In a lot of ways, I feel closer to the folks that come to my shows than I do with almost anybody. I just feel like they really understand where I’m coming from as a person and an artist and everything. If they weren’t there, I wouldn’t get to do this for a living. I just feel very grateful to them.”
So, a 7-foot magic pipe? Check. Perhaps a cowboy boot that has intricate rhythms drummed on it as a part of the magic boot? Check. And why not a rendition of “Somewhere Over The Rainbow” played on a magic saw, followed by a feeling of familial love? If that’s not enough to make you want to experience That 1 Guy, then here’s one more reason: Silverman admits that it’s through his live sound, not studio work, where he is at his best. “I just feel like such a big part of my sound is what I’m playing live,” he says. “I kind of stumble on to all these other parts … the arrangement changes because I’m improvising every night.” Silverman also loves to perform lengthy extended versions of songs found on his albums—such as a 12-minute performance of the title track from his 2007 album The Moon Is Disgusting, or the song “Rainbows” that goes over the 20-minute mark at times—that you wouldn’t be able to hear otherwise.
With all of this in mind, please do yourself a favor and come out to see the greatest artist you may have never heard before. Check out That 1 Guy at the Urban Lounge on March 22!
Photos: