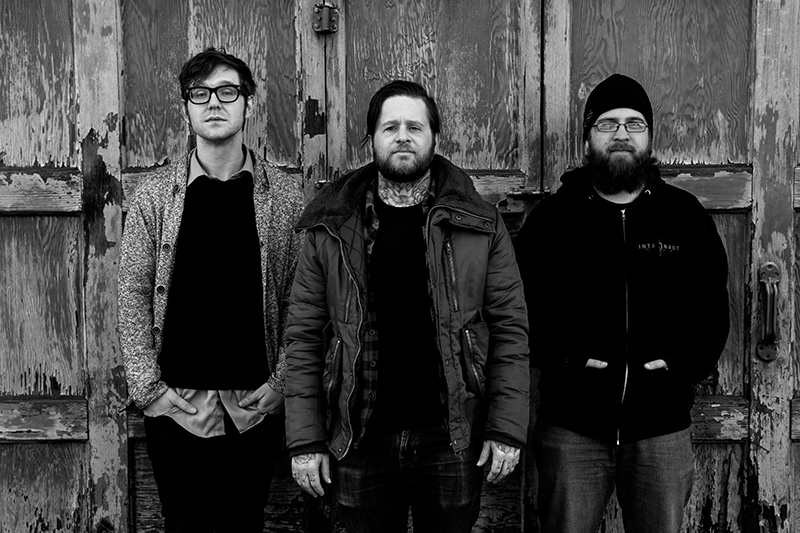 Heavy music fans in Salt Lake, rejoice: Making Fuck are back, though they look a bit different than you might remember.

The sludge three-piece, composed of guitarist/vocalist Kory Quist (The Ditch and the Delta), cellist Jessica Bundy and drummer/vocalist Anson Bischoff, returns this year with the release of A Harrowing End. Though their previous, self-titled 7’’ was satisfying as hell, nothing can prepare for the glory of the full-length, due to drop on March 11. The record is eight tracks of thick, gnawing anger: Bundy’s cello chews from the low end while Quist’s razor growls suffocate from the high, giving you no choice but to sit and take every swing. As usual, they pull no punches on their subject matter; Salt Lake natives will particularly love “Mormon Guilt” and its familiar sample from SLC Punk! that so succinctly describes what it’s like to live here as a heretic.

The record was written and recorded by Quist, Bundy and Bishoff, and according to Quist, the writing was approached in much the same manner as their previous work. His aim is to maintain a level of strangeness to the songwriting that keeps listeners interested and engaged. “The approach, like the other one, was lack of time signatures or any sort of reference,” says Quist. “That’s what plays into the name Making Fuck—we’re just doing what we want. It’s one of those [things where] the approach is ‘Try to dance to this.’ I get bored when it’s too predictable. I was trying to make things weird.”

While the recording process went mostly well, trying to maintain the brutality of the cello’s lows from live stage to record was a challenge. Bundy had rigged a special arrangement for the band’s live shows that allowed her instrument a greater level of sonic power and heaviness, which required incorporating trial and error into A Harrowing End—but successful they were. “Trying to capture that into the record was hard,” says Quist. “We had to do it a couple of times before we were like, ‘Aha—there it is.’”

Once the album was finished, plans were set in motion for a West Coast tour after a local release show. Not that any new album release goes smoothly, but Making Fuck has a very unique one: The members playing on and responsible for the album, aside from Quist, are no longer in the band, and won’t be playing their own release show. Separate amicable circumstances caused Bundy and Bishoff to leave the band at separate times, before both the album’s release and subsequent tour. Fortunately, Quist’s deep roots in the local scene allowed him to overcome this challenge and push forward with his band.

First, Quist tapped Scott Wasilewski (Huldra, Sights) to replace Bundy on cello, with the intention of simply replicating the album as closely as possible during live sets. After touring with SubRosa, Quist says that he found his “Hobbit twin” in bassist Levi Hanna, and their quick chemistry both personally and musically led him to ask Hanna to join Making Fuck and help add a new layer to their low end. “I’ve always wanted Making Fuck to be a little bit heavier,” says Quist. “It didn’t quite hit those expectations with super low notes, so I thought, let’s split the duties with the frequencies.”

Separation of duties on the low end could wind up altering the band’s sound a bit, as it gives Wasilewski a little more wiggle room with his cello-playing without costing the low end any power. “Levi can play the stuff I don’t feel like sitting down and figuring out,” says Wasilewski. ”Levi and I have been playing music [together] for five years, but we’ve never had this setup where he’s on bass. We’re still trying to experiment and figure out how it goes.”

Bishoff’s departure came at short notice, and after a few false starts, Quist reached out to Jamison Garrido (Star Grazer) to take Bishoff’s place on drums. As the youngest in the band, Garrido is jumping right in the fire by joining Making Fuck, replacing a previous drummer among seasoned musicians and tour dogs. But this achievement has been a long time coming for him, and he’s stoked to finally see his hard work pay off. “Anson killed it on the drums, and he has a very different sound than me, and the challenge kind of adds to the excitement of learning the parts. It makes it all that much more exciting to go on tour for my first time,” says Garrido.

The band has some unique challenges ahead, but nothing they can’t flatten in front of them. Making Fuck will be kicking off their West Coast tour with their album release show at Diabolical Records on Friday, March 11, supported by Die Off and Worst Friends. Bring your donations for the shop, and get the double LP for 20 bones.