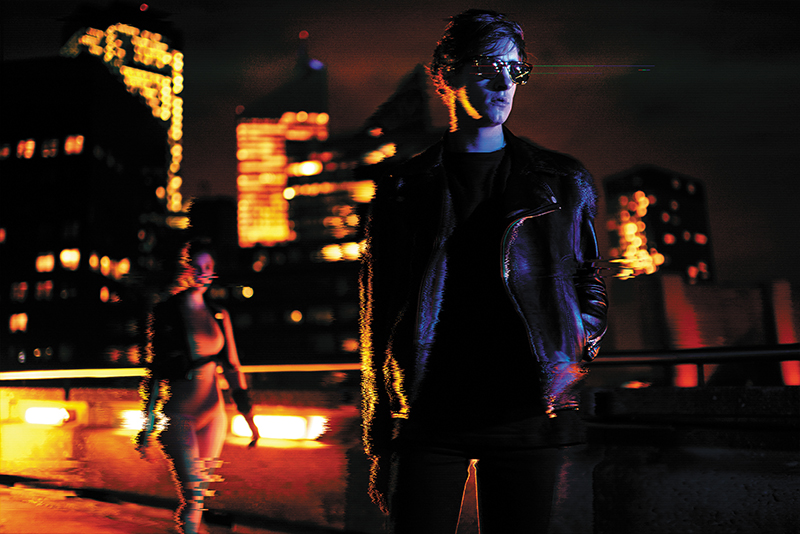 Finely crafted via machines but conceived by a human mind is an underlying and common theme for French electronic music artist Perturbator. Perturbator is James Kent, who began his musical journey as a black metal guitarist. He’s set to perform in Salt Lake City on Sept. 6 with Visigoth and Darklord at the Metro Music Hall. It’s no wonder that fans of metal are also fans of Perturbator’s sound—Kent has his metal background, so in essence, it is metal-oriented electronic music. “I want to make something that would remind someone of a metal album, but it’s still made by all machines,” says Kent.

My introduction to Pertubator’s music came from an indie video game that exploded, Hotline Miami 1 and its sequel. Set in the ’80s, the game is simple but tough. Its graphics compare to the 16-bit style, like an SNES top-down game. I remember late nights constantly dying, all while the beats of “Miami Disco” and “Technoir” pounded my skull. “It’s a very aggressive game,” Kent says, “a very violent game but also simple. It being simple—that’s the charm of it. It’s fast, too … so I guess it was a good fit for my music.” Kent says that he is grateful for the exposure the game brought to his music and cited it as a big launching pad for his career.

The success of Perturbator lies in his ability to transcend genre, gaining fans outside the electronic music scene. Many are quick to call it retro because of its ’80s thematic elements, but Kent says that he doesn’t want it to be just a nostalgic sound but for it to come across as new, his own unique creation.

As a guitarist, Kent struggled to find his way as he was in strictly local black metal bands in France. One almost succeeded, but it didn’t work out, and he found himself without a band. That’s when he came unhinged and decided that if he was going to make music, it would be completely on his own. “I still had this need to make music,” says Kent. “I don’t do it because I expect something from it. [If] I don’t do it, I’m going to go mad, really.” Kent had had no prior experience in electronic music, but he wanted that creative control over every aspect. He had felt limited being in a band, though this feeling arose from his sincere sense of artistry as opposed to anything egotistical. Despite that there are plenty of black metal solo artists and metal artists who derive inspiration from retro acts, Kent wanted something new, and it did not come without a heavy amount of work.

Kent learned from nothing—the only thing he knew, from his guitarist background, was how to compose a track. “The rest of it, fiddling with machines … was really unknown to me, so I had to learn on the fly, and of course, I never thought that Perturbator would get any recognition at all,” he says. “I really started from a blank page, kind of where I was not even aware of electronic music as a whole as a genre, [and] I didn’t listen to electronic music … The only thing I had in mind, the only thing I could catch on to as a sort of inspiration was John Carpenter, Tangerine Dream—all those ’80s soundtracks I was very familiar with because it’s the type of movies that I watch, mostly. It’s like John Carpenter if he was super angry and trying to do like metal but still with machines.” It’s impossible to learn without trial and error, which is what Kent did. He got better and better with time. The process was not just crafting Perturbator tracks but also learning the mixing and mastering process. The end result is Perturbator today, who’s released four studio albums and a slew of EPs and singles. “I’m fully confident with electronic music composition,” he says, “perhaps even more than writing metal.”

It all goes back to that underlying idea of that man who creates machines. It fuels Perturbator’s existence and engenders the themes of his albums, the latest being The Uncanny Valley, released last year. It’s easily Perturbator’s most aggressive album, with the blazing opener, “Neo Tokyo,” and “The Cult of 2112”—heavy, hard-hitting and faster, with a dark edge. Its theme is a cautionary story, one of machines or robots becoming sentient and more advanced than their human creators. He mentioned inspirations tying in with religion and a complicated theory called Roko’s Basilisk: “It’s like the theory that eventually, some day, we’d be able develop artificial intelligence so advanced that it will be almost god-like,” Kent says. “It will know everything. It will be able to solve every problem and so it will be like a god, but it’s still a human creation, so how does that work?”

Perturbator is not a DJ set: Kent plays multiple synthesizers and controls effects and transitions while there is a backing track coming from a machine. Hence, man and machine will integrate together when Perturbator performs in Salt Lake City at Metro on Sept. 6. Perturbator, while derived from machines, is also invoked by one man—a performance that balances artifice with artisanship.