00:00 / 20:24
Spotify Stitcher
RSS Feed
Share
Link
Embed
Audiences long for something fresh and wonderful. They long for the goosebumps of a genuine song and the thrill of not knowing what’s next. Ladies and gentlemen, allow me to introduce Temples. This brave English foursome has created one of the most entertaining and unique albums to cross the pond in some time

Marching To Their Own Beat: An Interview with Temples 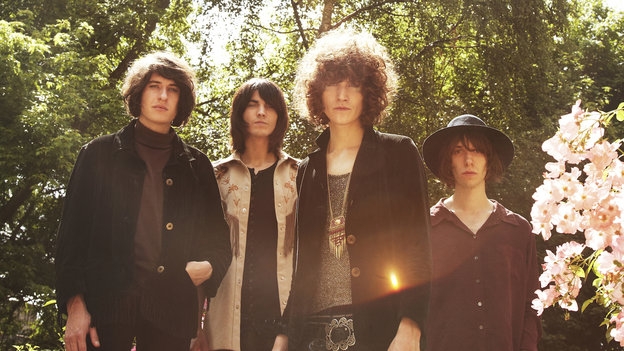 Temples have created one of the most entertaining and unique albums to cross the pond in some time. Photo: James Loveday

You can’t buy uniqueness. If you could, the world of everyday imitation would dry up and radio waves would crash against our ears instead of thumping the tune we’ve all heard before. Audiences long for something fresh and wonderful. They long for the goosebumps of a genuine song and the thrill of not knowing what’s next. Ladies and gentlemen, allow me to introduce Temples. This brave English foursome has created one of the most entertaining and unique albums to cross the pond in some time. One month after its release, Sun Structures sat at Number Three on the independent airplay charts, just a shade behind the well-established Broken Bells. With every one from Noel Gallagher to America’s brilliant indie tracker opbmusic.org acknowledging their talent and creative fortitude, these occasional psychedelic rockers have engineered something quite special for today’s modern listeners, and they did it while happily marching to their own beat.

Singer-guitarist James Edward Bagshaw and bassist Thomas Edison Warmsley formed the band in Kettering, Northshire back in 2012, and since then they’ve had about three weeks off. Bagshaw informed me over the phone that they’ve been “giggin’” and recording with such ferocity that this 51-date tour barely makes them bat an eye. “We’re just kinda used to it,” Bagshaw said, in a casual but clever manor. “It’s really awesome man.” With Coachella coming up in April, no one can discredit the undertaking of this international juggernaut of a tour.

In talking with Bagshaw, you get the feeling of relating to an old soul. Despite his fresh entrance to the music scene, you feel a sense of sure footed-ness that usually only comes attached to the most seasoned of vets. I asked Bagshaw about their sound and why they went with psychedelic rock. Bagshaw explained to me that they were never going for psych rock—the music that came out was just “instinct.” Bagshaw said when they created the four initial songs that set the tone for the album, that they were making the music they enjoyed and simply wanted to make. He politely said the intention was to blur the lines of genres and most of us listening would agree, Temples do this in spades.

The album is made up of 12 tracks, but like everything Temples touch, their B-sides released in England are just as impressive. During my investigation of the band I came across three lovely tunes, “Prisms,” “Ankh” and “Jewel of Mine Eye,” and asked if Salt Lake fans would catch any of these songs in concert at Urban Lounge on April 21, and why they didn’t make it onto the album. Bagshaw informed me initially these songs were never intended for the album, but that he thought “Ankh” would have fit and that they do play it in concert. Further inquisition led me to ask if he could add “Prisms” to the Salt Lake set, and Bagshaw humored me with an, “I’ll see if we can add it.”

Now generally as a journalist you stick to your guns and stay on track. However, those of us at SLUG like to delicately nudge at boundaries, and since Bagshaw and I were bonding, I asked, “When you guys come to town, can I play tambourines with you during “Keep In The Dark”? This was crucial because in this moment, this intellectual rocker could have smashed my dreams and been completely smug about my inept thrashings around their precise musical renderings, but he laughed and told me, “Of course you can come up and try, but the tambourines are a bit tricky and you need to swing the tambourine instead of just shaking it.” This revelation was very kind, and for SLUG readers, I’ll have you know that I have been swinging ever since.

Now being from Salt Lake City gives way to a certain amount of pride. We love our music. We also love our appreciation of music and show it with all the lovely enthusiasms we can muster. We sing, we dance, and we get along in a way that is almost choreographed. I explained that Salt Lake fans will disrupt whatever they have perceived in American audiences. Bagshaw chuckled and replied, “Tell them to bring a separate change of clothes and perhaps some ear plugs.”

I wished Bagshaw a genuine farewell and told him Salt Lake City will be waiting with swinging tambourines in hand. Join them at Urban Lounge on April 21.