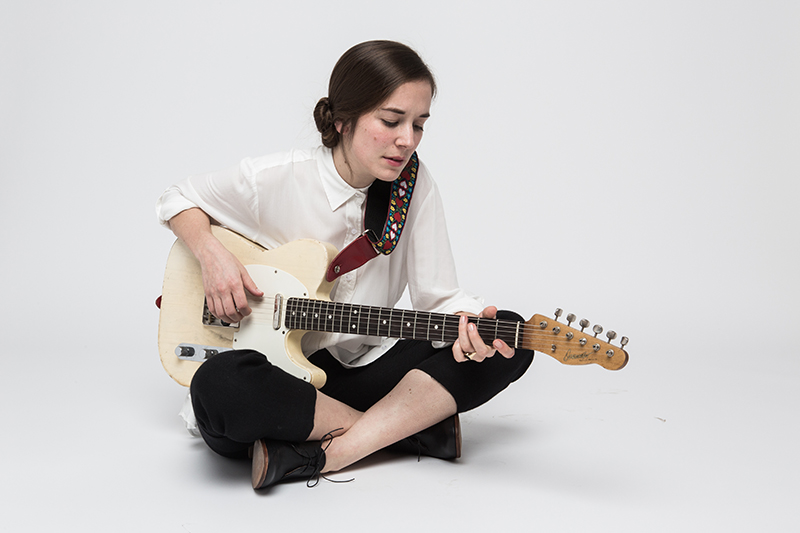 With a soulfully sweet voice and a songwriting structure that mimics poetry, singer-songwriter Margaret Glaspy considers herself somewhat of a craftsman. Her first full-length release, Emotions and Math, oozes with honesty and has already grabbed the attention of NPR (“World Cafe Next”), Rolling Stone (“10 New Artists You Need to Know”) and she has already opened for acts such as The Milk Carton Kids and Lucius. Her West Coast tour will feature a return to Kilby Court on July 16 with Anthony Pena.

With Emotions and Math as her first release, Glaspy felt as though she was more than prepared for the recording process, having initially recorded on her iPad and then later again with recording equipment before finally being contacted by ATO Records to record in studio. “[The recording process] was deliberately quick,” she says. “I felt like I kind of recorded my music the way that I wanted to for the very first time, so that was probably the most rewarding.” Emotions and Math mainly features Glaspy’s strong, ardent voice backed by a simiplistic electric guitar, but also features a band, which she intentionally picked to give the most effectual sound with out any excessive noise. “That was a big through line for this record—in terms of the instrumentation and the lyrics and the production style—that I went for on this one,” she says. “Weeding out everything that was unnecessary, that was a big part of the process for sure.”

The result is a powerfully heartfelt vocal display that focuses on Glaspy’s lyrical prowess with funky rhythms that do not overshadow the lyrics, present especially in singles such as “You and I” and “Memory Street.” which feature a more rock n’ roll sound. Songs such as “Somebody,” have a more soloistic approach, and feature her bluesy guitar. However bluesy Emotions and Math may appear, Glaspy says that she hasn’t really felt that a particular connection to any labeling as far as genre is concerned. “It’s hard for me to say, because I think that people’s perceptions of the music are probably more accurate than mine,” she says, “It’s kind of there for the taking, as far as people trying to describe it a certain way—I can’t really control it anymore.” Her influences of Elliot Smith and rock n’ roll are a definite undertone throughout the album, but it can only be described through its laurels as an poetic lyrical display.

For Glaspy, sometimes the music precedes the lyrics in the songwriting process or vice versa, but for her, the biggest goal is to be able to keep consistent in her songwriting as she moves forward as an artist. “The process for writing this record was writing every day and keeping a personal archive of all my ideas and then kind of mashing them together and editing them,” she says. “I’m starting to learn how to write and be on the road at the same time.” As someone who became serious about songwriting at around 18 or 19 while attending the Berklee College of Music, the biggest key for Glaspy was to be steady and consistent in creating new material to work with. Constantly working on writing, even if it’s something that won’t always make the cut, is essential to Glaspy’s philosophy of creating songs—the same way one would perfect a craft, as she not only writes for her own music, but for others as well. “When you have songs that don’t go on a record, I don’t feel like its a loss, because you can use them in so many other ways,” she says.

After releasing Emotions and Math on June 17 of this year, Glaspy is looking forward to touring straight through November, hitting stops in both the United States and Europe. “I’m excited to see the Netherlands,” she says. “I’ve only been to the U.K. very minimally … It’s all going to be pretty new to me. So I’m really excited just to go there and have the opportunity to play outside of the States.” As far as Salt Lake City is concerned, however, Glaspy is no stranger to the scene, having played Kilby Court before as an opener for Mount Moriah in the past. “I’m excited to come back. I think the music will fit the venue really well,” she says.  “I love that venue, and it reminds me of Brooklyn in a really cool way so it feels like home there.” Her live performance will feature a trio, but she promises that the sound will feel much larger. “I think we offer a pretty large sound for only being three people,” she says. Emotions and Math can be found on iTunes, Spotify and margaretglaspy.com. Check out the show at Kilby Court on July 16 at 7 p.m.