Matt & Kim weren’t always this big mass of awesomeness you see today dominating YouTube, airwaves and the cheeky hearts of their fans—they did, in fact, start out somewhere a bit lower on the totem pole. 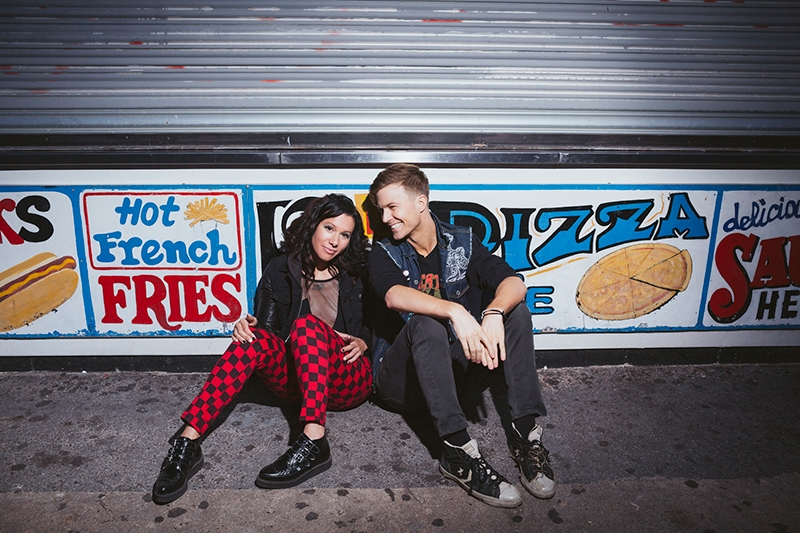 Matt & Kim play The Depot on May 4. Photo: Matt Miller
Matt & Kim weren’t always this big mass of awesomeness you see today dominating YouTube, airwaves and the cheeky hearts of their fans—they did, in fact, start out somewhere a bit lower on the totem pole. Perhaps they were recording an album in Matt’s childhood bedroom or maybe Kim was perfecting the moves of her legendary stage dance routine. Either way, they started progressing upward and even more incredibly. They aren’t even near the top of their super-duper wave of clever indie pop now. Maybe they’re just waist deep, the part where it starts to get interesting. I sat down to chat with Matt recently about Jimmy Kimmel and stand-up comedy—the revelations were incredibly, stupendously fun, which is what you’d expect from the entertainment juggernauts.
SLUG: I saw you on Jimmy Kimmel the other night. You guys looked great and congratulations on getting the 420 episode!
Matt & Kim: Thanks. We shot that a few weeks ago and I was wondering when they were going to air it.
SLUG: So how’s the tour going?
Matt & Kim: It’s great. we’re in Dallas right now. We’re bringing the rain I guess, because Dallas has been dry for a while, so we were like, “let’s give them a little.” It’s funny with touring—we’ve been doing it for almost 10 years and it’s so awesome that it’s just been a steady growth the whole time. Some bands live and die by a song or single and their shows fluctuate, but it’s never been like that for us. We’ve sold out more shows on this tour than we ever have before. We’re very grateful that people come back to see us over and over. I hope I never take that for granted.
SLUG: Well you guys are peaking at the right time. You’re not a new band being thrown into this crazy music scene—you’re a well-oiled kick-ass machine.
Matt & Kim: We actually were playing shows and touring before we even had an album out. Back in the day, there was this little thing called Myspace and we had us some songs up there. What we learned, even though we loved playing shows and writing songs, is that if you like ice cream, you can’t eat it every day. It’s exciting to hear the crowd recognize and cheer for a song they know from listening to the album.
SLUG: Some of my favorite songs were never played on the radio and hearing them in concert always feels more intimate than the ones everybody knows. Concerts give us the chance to tell the performer, “More of this, please!” The amount of energy and smiles you bring to a show is impressive and not always the case with all bands. How do you keep it up show, after show, after show?
Matt & Kim: We’ve never felt like this was a chore or like, “Ugh, we have to go on stage.” This feels more like a vacation.
SLUG: That’s quite the vacation. When I go on vacation no one cheers, “You fucking rule man!” and “You’re awesome.” My vacations just feel like I swipe my debit card a lot.
Matt & Kim: It’s funny—I’ve had people walk up to me and they apologize. They’re like, “I’m sorry, I just had to say how much I love your band,” and I’m like ,“Why are you apologizing? Thank you. Thank you so much for saying so.”
SLUG: I’ve met some celebrities and there have definitely been moments where I’ve felt like, I was clearly bugging this poor person.
Matt & Kim: You know and it’s funny because I was reading this article with some pseudo celebrity and they were like, “This a drag. I don’t want to do this.” I was like, “Get over yourself.” I also read another article with Dave Grohl, and he’s been taking pictures with people in restaurants for over 10 years, and he says that’s the best part of his job. He doesn’t take his success for granted. He knows at any moment it could go away. When I heard him say that I thought, “We share a similar feeling.”
SLUG: Dave Grohl is an amazing man.
Matt & Kim: You know, I was in a hotel lobby once at four in the morning and someone came up behind me and gave me a huge bear hug then spun me around. It was Dave Grohl and we’d never even met before, and he was like, “I love what you do!”
SLUG: So jealous. My parents never bear hugged as a rule. Our official family greeting was the high five and maybe the two handed kind for special occasions. Anyway, are you getting excited about coming to Salt Lake City?
Matt & Kim: I remember when we first came to Utah we played at Kilby Court and how hard it was to find it pre-GPS. I was like, “Is that a junk yard dog over there?” Then we went on to play In the Venue a few times and I started to have this feeling with Salt Lake City. It’s one of those cities that gets so excited for a show. We opened for Passion Pit once and everyone was yelling so loud before the show. Salt Lake City just has a great energy about it.
SLUG: Well Salt Lake City is officially the dancing-est city in the whole universe so you should prompt them during the show at The Depot, May 4th.
Matt & Kim: I would love to see that. Yes, Salt Lake City, please show off your dance moves.
SLUG: Certainly, SLUG will more than happily let them know. I have one last question from some local fans. If you were a secret agent, what would your secret agent name be?