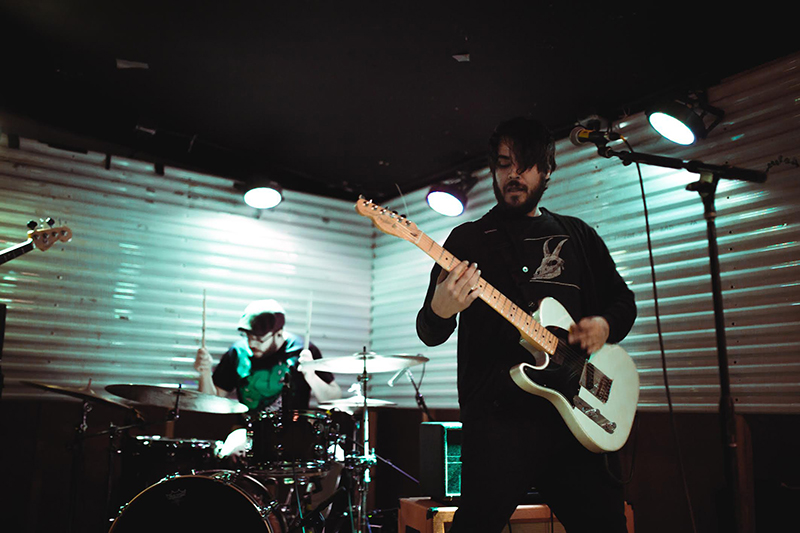 In what originally started out as an acoustic solo project by local musician of Matt Mascarenas (Heartless Breakers, Run Into the Sun), Westing has evolved into something of a fully realized, post-hardcore sound, complete with full instrumentals, high intensity and honest lyricism. Rough Year is the first full EP from Westing, released Nov. 16 through Archive Recordings.

Named after the ancient Egyptians’ idea that the soul’s journey through life was akin to the sun rising in the east and reaching the western horizon, Rough Year has the feeling of a cyclic completion, epitomizing 2016 for Mascarenas. Having only recorded in his apartment for Westing prior to Rough Year, Mascarenas says that the new evolution of Westing arose out of a stagnation in other projects. “I’ve always wanted to do [a solo project,] but at the start of the year, my schedule just kind of completely flat lined,” he says. “We had to postpone some stuff we were writing; the job I was working at ran out of money, so I got let go, I was supposed to go on tour with Cult Leader doing merch, and then that tour canceled. I like to keep myself super busy, and the good stress just kind of plateaued.”  For Mascarenas, Westing became a project that satisfied the need to hear something completed when everything else could not be. “It was mainly so I’d feel like I was being productive,” he says. “It just kind of snowballed into ‘Hey, I should play a show’ and ‘I should record more.’”

As the Marketing Director for Archive Recordings, Mascarenas recorded for Westing when there were gaps in the studio’s schedule, with help from Ken Vallejos (Great Interstate) on the drum tracks. The decision to integrate Westing into a full band sound was based on Mascarenas’ past experience with performing live as a solo act. “Before, I was just doing this by myself on acoustic guitar because that’s all I could do for a show, but when I started playing shows, I was just like, ‘Oh, this is kind of not as fun playing by myself’,” he says. In addition to Vallejos, Wes Johnson, producer and audio engineer at Archive Recordings, is also part of Westing’s live show, and was instrumental in Rough Year‘s release. “Working with Wes and Ken, it was awesome working together because they kind of just left it up to me,” says Mascarenas. “Everyone I asked [to be in a band] said yes right away, so it turned out to be so easy.”

For Mascarenas, having the freedom to be able to take Westing in whatever he wanted was liberating, though sometimes daunting. “I had all the time in the world,” he says. My sleep schedule was super off, so I would just drink coffee too late, stay up all night writing songs and then a lot of the times be drunk by the end of it. Then in the morning, I’d go record it at Wes’, go home and hurry and write lyrics and then sing them.” Although Mascarenas had a good idea of what he wanted to do with the instrumentation, he admits that a lot of the lyric-writing was done on the spot. “I didn’t give myself a chance to overthink it because I would second guess everything, and I would hate it, and I’d probably not keep doing the project,” he says. I’m pretty good at doing that.” What results is an honesty that borders on the autobiographic in Rough Year, making the EP all the more memorable.

As a musician who has constantly been involved in multiple projects, Rough Year signals a definite departure from the usual touring and performing schedule for Mascarenas. “I’ve just spent the last decade of my life mostly on tour, and then the last couple of years have been less so, but this year, I didn’t have any of that. I just knew I had to get my brain out of this.” Focusing less on live shows and touring in 2016, Mascarenas found a new niche in recording and writing. “Weird, I’ve only played three shows this year,” he says. “Its the most opposite year I’ve ever had. I pretty much spent all year in the studio with something. I guess I replaced touring with the studio, which has been cool because I realize that I really enjoy making music more than the touring, even though I like both.”

However, Mascarenas plans on revisiting more of his other projects in 2017, as well as playing a few shows as Westing to close out 2016. Westing will be performing at Funk n’ Dive Bar in Ogden on Dec. 2 as a solo-acoustic act, and then as a full band on Dec. 17 with Sun Sleeper at Kilby Court. Rough Year can be streamed online at westing.bandcamp.com and soundcloud.com/westing-1.