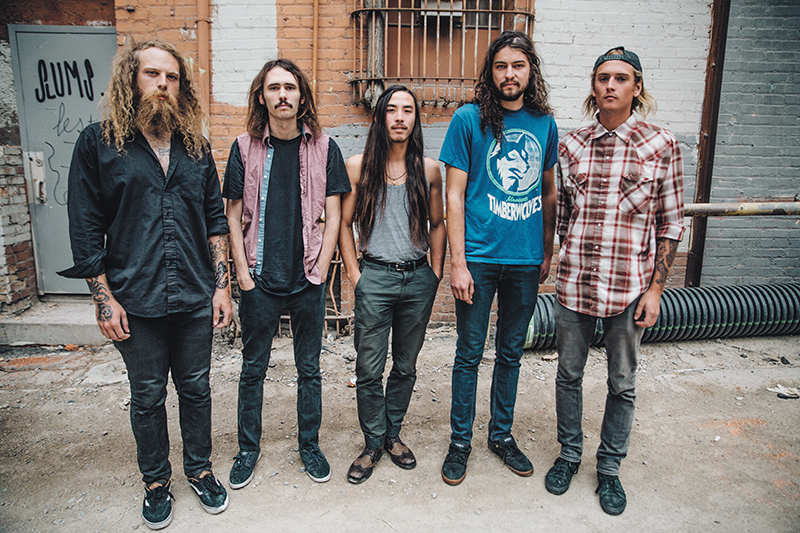 Max Pain and the Groovies: The Grease Moving East

Max Pain and the Groovies have used Salt Lake City as a platform to catapult themselves into a realm of success that they had never envisioned for the band. The band met through skateboarding back in junior high and have been friends ever since. They bonded over their love of pushing wood, drinking cheap beer and getting into trouble whenever possible. Music wasn’t always the driving force for the Groovies. It wasn’t until 2010, many years after their preteen skate-rat days, that things with Max Pain began to develop into something deliberate. What once was their golden ticket to pick up chicks and to party evolved into something driven with passion, perseverance and a whole lot of raw talent. That quiet ambition that Max Pain possess has landed them a spot on Lolipop Records, two LPs—the second, titled Ancient Grease, to be released Oct. 28—and the opportunity to pack up and move across the country this fall to New York City.

Max Pain and the Groovies comprise five eclectic, raunchy best friends. David Johnson is the group’s frontman, who bounces back and forth between singing centerstage and his keyboard. Shane Preece and Dallin Smith both shred guitar, often alternating who takes the role of lead. Kallan Campbell’s long, dark hair sways effortlessly as he plays bass. And Troy “Tcoy” Coughlin is the wildly curly-haired drummer. Coughlin remembers the start of the band and how Max Pain came into fruition—they first played music as an accompanying pastime to drinking and hanging together. Eventually, though, “We were like, ‘How do we go on skate trips and have more meaning and substance and reason?’” says Coughlin, “and it was like, ‘Oh, fucking music.’” And with that, Max Pain and the Groovies launched.

Ancient Grease, Max Pain’s newest LP, was recorded at Man vs. Music Studios in Salt Lake. The quirky album name came from Smith, but the word “grease” is used by the band often. Johnson says, “‘Greasy’ has always been a term that we’ve used when we kind of get into some weird situations.” Campbell goes into more detail ,explaining that it’s “indulgence of the moment.” More often than not, the songs on Ancient Grease are about their friends, partying and everyday “greasy” SLC life. Campbell says, “One song is called “Quarter Sodas,” and that’s how we all met, just meeting up at the local grocery store to buy quarter sodas and go skateboard after school.” “Quarter Sodas” is an instrumental track directly in the middle of the album, and although there are no lyrics, the song is entrenched in their deep connections with their friends and one another. The band is rooted in heavy psych, punk and garage rock—the essence of what made Electro Cosmic such an underground success is certainly still there, but Ancient Grease shows a maturity in Max Pain. Touring extensively has led the boys to discover their greatest strengths, not only in their live performances, but also in the studio.

Max Pain spent about a month and a half on a national tour this summer. The band had been to New York a couple of times and felt something there lurking in the shadows of the high-rises luring them in, specifically this last time. “Especially now, having a pretty good idea of music scenes across the country, shit’s really popping off over there,” says Coughlin. “People appreciate it, and there’s a lot of good markets and more opportunity.” Each of the band members felt a fire both for their music and personal growth. Max Pain are planning to move to New York this autumn, float around for a few months to get a feel of the city, and then leave for their Europe tour in January. When they return from tour, they plan on writing new material, playing as many shows as possible and building a foundation in a city where they will have to start over. The guys are undeniably ready to challenge themselves in the city that never sleeps.

No matter what New York brings, though, SLC will always be Max Pain’s home. They are going to miss the friendships they’ve cultivated here the most, as well as the local music scene. The music community here in Salt Lake is so supportive, and Max Pain have created a fanbase that will not forget them. Campbell reflects on the city in which his music career got started, saying, “Largely, it’s such a supportive community, which is really cool, but it will be good to get humbled out there [in NYC] and have to rebuild again.”

Max Pain and the Groovies have been a Salt Lake staple since their infantile band days. In a way, it’s shit to picture this city without their familiar faces roaming Twilite and Urban Lounge, but it’s something we’re going to have to get used to. Let’s send Max Pain off with the goodbye they deserve and make Ancient Grease’s album release party on Oct. 28 at Urban Lounge their most memorable show to date. Shoutout to Max Pain for everything they have done for our music community—you will be missed.