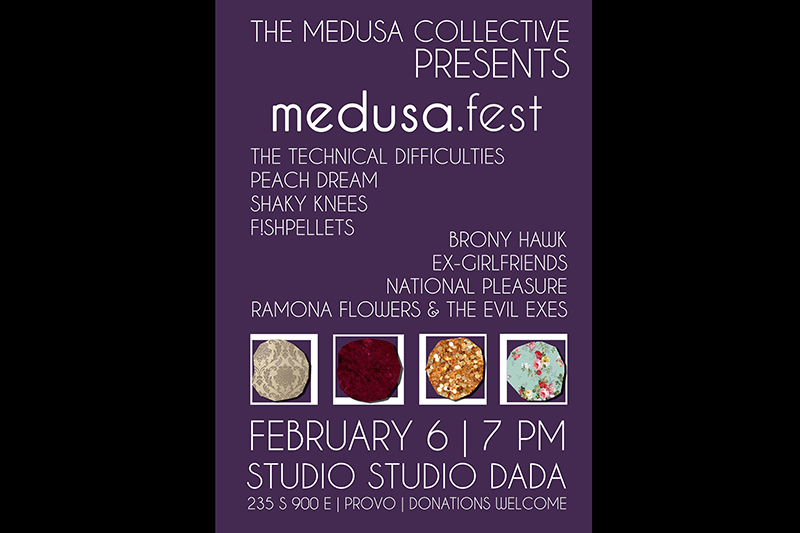 MedusaFest: A Musical Night For Women and Non-Binary People

On the frigid night of Feb. 6, Provo’s The Medusa Collective staved off the cold by putting on MedusaFest at Studio Studio Dada. The show was a collection of bands thrown together by means of names drawn from hats a month prior. The bands, however, were all made up of women and non-binary individuals—a push against music scenes as mostly masculine spaces. Each group had a month or so to practice before showing off the fruits of their labor at the final show. With seven bands, the night was definitely long, but it was full of diverse sounds and also full of people.

The night started off in the wide, subterranean basement that is Dada, a relic of the ‘70s with panelled walls blotted by dim corner shadows yawning with draftiness. As a spectator, it felt awkward, the quiet space filled with the hushed chatter of band members. Izzy Fernandez, of the MedusaFest-born group Shaky Knees, said that it was actually reassuring for her as a performer. “At other shows I’ve played, I’m super nervous and trying to talk myself out of it, but with the other bands there, we were all joking about it,” she says. “It’s a really friendly setting—I didn’t feel nervous. I was excited to see what everyone else had.” When Stephen Cope, operator of Dada, hopped over to the mic in a corner, decked with promising red and pink streamers, he started the set with “Here’s to lazy mediocrity.” An exclamation of “Goddamn!” came out of the little knot of band members as Ex-Girlfriends was dubbed the first band of the night. More and more people filed in, and the opening and closing of the door and the murmur of newcomers were constant throughout the night’s performances. Fernandez says, too, that it was the most packed she’s ever seen a Dada show. The crowd was the size of Diabolical Records’ Bandemonium, an event with the same, random-band premise as MedusaFest. Fernandez says she wanted to participate because she loved Bandemonium but that she was always intimidated by it. She felt that as someone with only a bit of musical experience, it was a safe space to have fun. “I think it’s important to create spaces in music for women and nonbinary people,” she says. “Everyone loves music, and everyone needs music on a certain level and there are certain groups that are better represented [in music].”

The status of not identifying as female was really all that the bands had in common. Each group had members with varying musical abilities. One band towards the end, Peach Dream, which featured Cope, had a drummer who’d never touched a pair of drumsticks before involving herself with the fest. Fernandez says, “I know three chords on the guitar and I know how to play on the piano. I’ve done solo stuff before but never in a band, and that’s always what I wanted to do when I was growing up.” That and just having watched The Runaways inspired her to play music with a girl band.

This inspiration is uncanny, since the show started off with Ex-Girlfriends, whose lead singer rocked a Runaways-esque look, warbling through two slow-progressing, folksy songs with a throaty wail that highly complemented the accordion played to her right. Such an odd instrument making an appearance at the very beginning well represented the array of sounds the noise would present. They were followed by Technical Difficulties, a twee twosome who twinkled through a set with acoustic guitar and keyboard accompanied by whispery harmonies. They sang a song about girls liking girls and another about a haircut and liking “my face by itself.” They were then joined onstage by Fish Pellets and announced a new hybrid name, Fish Difficulties. The song that followed was about the difficulties of owning a fish and whether the name of the band was inspired by the song or the song inspired by the name, it’s impossible to know now. The song had a chanty, childlike chorus, and they ended the set with everyone singing along, sounding like a children’s educational program gone strange.

Next was Ramona Flowers and the Evil Exes, who started off their set with a craggy, fuzzy version of “Island in the Sun.” Their second song, however, was completely different, with spaceship-like synth and Wonder Bread–sweet vocals. Between songs, lead singer Erica Davis drove home the point of the fest, saying she was a “proud mama” because half her band had just learned their instruments. They were followed by the punkish, sugar-sweet Peach Dream, who sounded a lot like the rough and tumble Diet Cig. They sang in juvenile but assertive voices at anonymous wrongdoers: “You only want me when you’re hungry,” a lyric ambiguous and suggestive all at once.

Cope made their appearance in Tony Hawk and the Bro Haters, or Brony Hawk for short, and before playing, they announced that we, the audience, were the band’s “bronies.” Cope’s voice floated out, lovely and confident, wavering and shivering, and the restlessness of the crowd made way to attentive listening. Perhaps the most infectious set of the night, Brony Hawk provided a sense of renewal that made way for the last two bands.

Fernandez’s band, Shaky Knees, started out with a song titled “An Open Letter to Planned Parenthood,” where they sing, “I don’t wanna touch a baby / Not just because I’m lazy.” Fernandez said that the song was born from the awkwardness of their first practice when another band member told a joke about Governor Herbert. Fernandez, identifying as quiet and shy, said it was interesting to be up there screaming about Planned Parenthood.

The night ended with an a cappella piece that brought to mind the harmonies of Mountain Man. Their second and last song had their voices floating over fast drum beats, delivering predatory lyrics about eating. As they continued, their name escaped my ears and the noisy crowd made a premature swell towards the door, but though nameless, their performance settled the evening.

At the end of the show, Fernandez was near the back, standing on one of the church pews that lines the space.“Stephen was thanking everyone for coming out, and I just looked around at this huge crowd of people and was so glad that people actually cared about it,” she says. “I love everything Medusa is about—it was nice to see so many people supporting it.”

MedusaFest provided an opportunity not only for women and non-binary people to put themselves out there musically, but for people to come and watch what just a little collaboration and practice can yield in an atmosphere with no boundaries or presumptions. The Medusa Collective itself seeks to do this on the regular, so if you missed this experience, put it on your to-do list to come support the inspiring people who made this event possible.