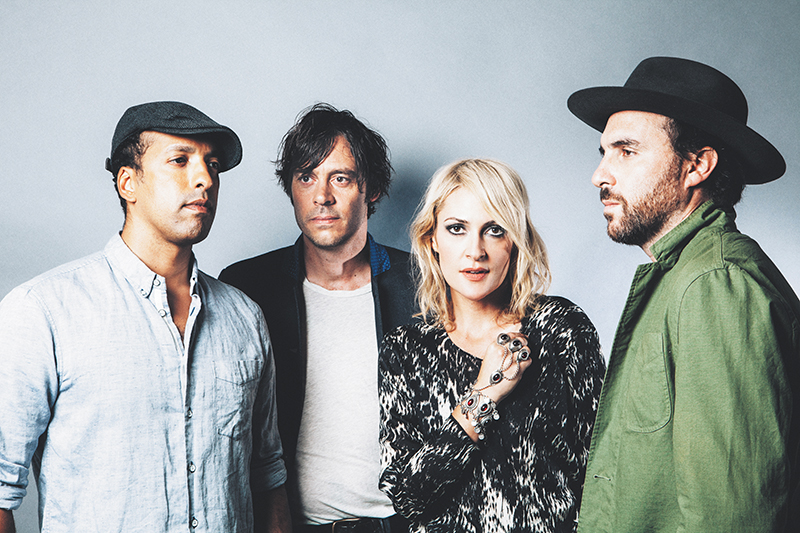 Metric Wants It All

A good measure of success in the music world is how often a band can infiltrate the industry’s arena-and-airwaves club while still writing, recording and releasing records completely on their own. As the electro-punk vets of Metric can attest, it’s a prickly space to occupy, fraught with expectation and heavily guarded opinions. “Oh, there’s anxiety all right,” says Metric singer, Emily Haines, “but it’s the good kind.” On the dancefloor-ready heels of the group’s sixth studio album, Pagans in Vegas, Metric return to The Depot on Feb. 17 as strong as ever in their 17-year career together.

Formed in Toronto in 1998 by Haines and Jimmy Shaw, Metric are an unstoppable creative force. From their early working name, Mainstream, to the duo’s initial mandate to disrupt and infiltrate commercial radio, it comes as no surprise that Metric have climbed out of the indie divide and made a name for themselves in decidedly industry channels. “We were branded ‘too underground for the mainstream and too mainstream for the underground’ by a label guy very early in our career, and it turns out he was right,” says Haines, who uses this iconoclasm as a tool in Metric. “I think it is the only reason we have been able to survive. We carved out a place for ourselves in between the two.” Shaw agrees: “When Emily and I met, I think the very first conversation we ever had was about being the anomaly on the radio,“ he says. “It was about being the alternative in a world of alt rock—we’ve never really fit in either space.”

While Metric’s first two albums, Old World Underground, Where Are You Now? and Live It Out, were indie-rock successes—respectively going gold and platinum in Canada—it was their fourth, most rock-influenced album, Fantasies, that vaulted them into the stratosphere. “The response to Fantasies was quite surprising for us,” says Haines. “Our personal lives were in upheaval. Suddenly, new people seemed to understand and like us in rather large numbers, and it was quite a shock. Our lives really did change with that album.” With each new access level, Metric have reached a new set of fans. “We’ve always taken the approach of growing the band, even when it means swallowing your ego, which is why we have been fine with opening for mainstream acts when the opportunity makes sense,” Haines says. “We built this thing to last, and I love meeting people who have just discovered us and are going back to Old World Underground and Live It Out to get caught up.”

Glinting like a neon marquee advertising Metric’s career of sinewy electronic rock, Pagans in Vegas is the synth-flourished jewel in their crown. Relishing in ’80s new wave inspiration, from Depeche Mode and The Cure to modular synthesizers, Pagans combines the angsty ethos of early Metric with the bombast of Fantasies’ arena-sized hooks. “Metric was very much designed to be a means for us to push ourselves in any direction that beckons us for whatever reason,” says Haines. “So when [Shaw] played me what he’d been working on and confessed that he had zero desire to record guitars and drums in the same way we had done it before, I was the one who said, ‘Let’s do this instead.’” The resulting album traverses rhythmic pulsations (“Cascades”), beatific anthems (“Celebrate”), Vince Clarke–esque chirps (“Other Side”) and instrumental, modular-synth explorations (“The Face, Pt. 1”) that push Metric’s sound into new territory. Haines’ and Shaw’s inclination paid off. “Doing the same thing wasn’t going to feel right to us,” Shaw says. “This music didn’t want to go there.”

Pagans’ lyrical concerns also reflect the group’s newfound attitude—exploratory independence. “Lyrically, I am inclined to address the bullshit that went along with [Metric’s mainstream success],” Haines says, “because I don’t want to be one of those people that gets famous and then never comes back to the world. Celebrities are paraded around in our culture as proof that ‘anything is possible,’ the way big winners in casinos draw our attention away from the thousands of doomed gamblers the rigged system requires to thrive. I have the highest aspirations for myself possible when it comes to my work, so untangling it from dreams of fame and fortune is tricky.” Haines’ euphoric declaration of “I want it all” on “The Shade” goads listeners into thinking that the group is content with where they’ve landed, yet conversely, they’re guarded about the whole premise: On “Other Side,” Shaw sings, “All we want is to feel like all we got didn’t cost us everything,” a nervous reflection of their place in the world.

Following the standard that Metric’s held since their early days, Haines asserts that repetition has not been conducive to the band’s creativity. “The most frightening thing for me as an artist is the idea of spending the rest of my life attempting to repeat what succeeded in the past,” she says. “If we’ve done this right … we’ve created a body of work that gives people something they need, whether they’ve been with us since the beginning or are just finding out about us now.”

For more information on Pagans in Vegas, follow Metric at facebook.com/metric.