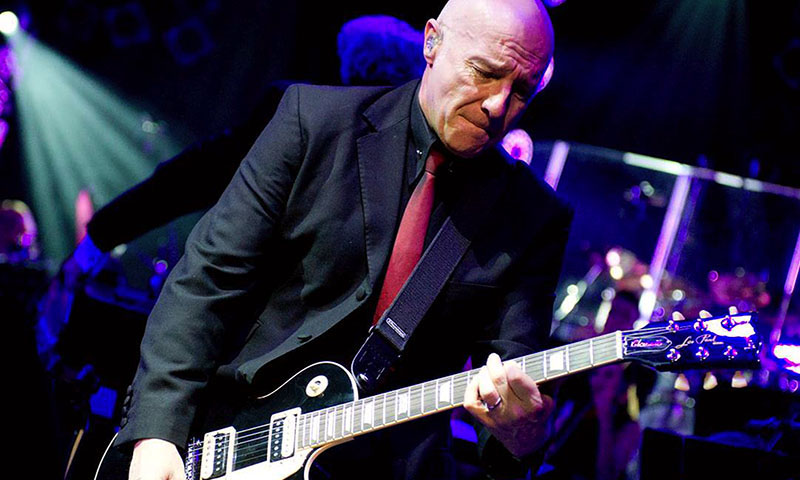 Midge Ure, the Once and Future New Romantic

The exploits of Scottish musician Midge Ure have been drastically unheralded, particularly in America, where we don’t seem to be as nearly interested in the people behind our nostalgia as we are about pillaging it.

My introduction to Ure was somewhat untraditional in the sense that I knew him as a solo artist before I learned of his work as a member of Visage and Ultravox. Well, that’s not entirely correct. You see, in 1984 Ure, along with The Boomtown Rats frontman Bob Geldof, was behind a little song known as “Do They Know It’s Christmas?” Seeing as how we’ve just made our way through another holiday season there’s a fair chance you’ve heard it.

I was very aware of the song and eventually that led me to a copy of Video Aid: The Feed the World Compilation, a VHS (we’ll talk about cassettes as well in a moment) tape that included a variety of videos from bands that were associated with the original project. This included everyone from Frankie Goes to Hollywood to the Eurythmics and U2. I loved music videos, but we never had MTV, so I spent many hours watching my favorite songs over and over again (there’s also a fair bit that I’d skip through). One of my favorite selections was Ultravox’s “Vienna.”

A couple years later, when I was branching out on my own into music with the help from the DJs of KJQ, I purchased Midge Ure’s Answers to Nothing on cassette based on hearing “Dear God” (no, not the XTC song) on the radio. Since my collection was fairly limited, I spent a lot of time with that particular release. It likely served as my first introduction to Kate Bush, as she appears on the track “Brother and Sister.”

I would eventually connect Ure with his Ultravox work and explore those records in their entirety, but first and foremost, I’ve always considered myself a Midge Ure fan, not necessarily an Ultravox fan.

I, in not so many words, try to convey my somewhat peculiar course of fandom to Ure, who agrees that my path, particularly given the era of when I dived into music, is “a bit different,” but it is something that he has faced before.

“It happened about 20 years ago in Italy,” Ure says. “I released an album called Breathe, but it stalled for two years. It was the worst-selling record I’d ever made. Then Swatch, the watch company, used the title track in a TV advert … and I was faced with a sea of 18-year-old kids who knew every word from that album, but were completely bemused when I played ‘Vienna’ or ‘Dancing with Tears In My Eyes.’ They had no idea of what they were seeing. All they knew was me from the particular period.”

It’s a phenomenon that has happened again as Ure’s cover of David Bowie’s “The Man Who Sold the World”—which he originally covered in 1982—recently found its way into the video game Metal Gear Solid V: The Phantom Pain.

“An entire sea of kids who have fallen in love with that song and have started to work their way backwards,” Ure says.

I wouldn’t get to see Ure live until 2014 as part of the Retro Futura tour where he was down the bill from Howard Jones and Tom Bailey of Thompson Twins fame. The set was a fantastic five or so songs, but proved to be little more than peek into what could be if Ure was given the room to play an entire set. It turns out that Ure felt the same way about his Utah audience as I felt about his performance.

“I was completely blown away at the Retro Futura thing,” Ure says. “I couldn’t believe how many people sang along to those songs. It was just phenomenal. So I made a big concerted effort to come back this time around.”

Whereas many of Ure’s solo releases steered away from the more electronic sounds of Ultravox, his latest release, Fragile, is more akin to those classic New Romantic releases.

Ure explains that Fragile was written over a 10-year period. In fact, it was about 90 percent finished when Ultravox decided to reconvene in 2009. Initially there were no plans to record a new album with the group, but once the ball started to roll, new material seemed inevitable. As such, Brilliant arrived in 2012 and saw the group touring into 2013.

Following the Ultravox revival, Ure returned to finish the solo album that he had put on hold.

“I got back into making a record that I wanted to make, as opposed to having major labels push you and prod you and change you the way they want. I went back to what I felt comfortable with to the extent that, on the Fragile album, I absolutely played everything myself, which is what record labels desperately tried to stop me from doing. I ended up making an album that is quite possibly the best I’ve ever done,” Ure cautiously says.

While that might seem like hyperbole or simply a pitch we’ve heard so many times before from artists when they pitch their latest release, in this case, Ure is absolutely telling the truth. Brilliant was a remarkably solid release, particularly considering that the classic Ultravox lineup hadn’t played together in more than 20 years, but Fragile is, without question, Ure’s strongest solo outing and rivals any of the long-play releases from Ultravox or Visage.

He jokes that he might be a Doctor Who character who simply regenerates himself every few years.

“I’m on my own peculiar path,” he says. “Sometimes it goes forward or backward and sometimes it goes in circles. I don’t sit down and try to write a three-minute hit single. I never have. Maybe it’s because I’m not able to do it. ‘Vienna’ was never an obvious hit single, but it was hugely successful. I want to make music that my children won’t be embarrassed about.”

He explains that when Ultravox got back together to record Brilliant, their goal was to record an album that was better than anything they had done before.

I note that it was much stronger than U-Vox, the group’s final release from 1986. U-Vox felt like a band under pressure; Brilliant sounds like a band set free from their constraints.

He corrects me, saying, “It was like a marriage breakup. Everyone going in different directions.”

Ure says, at that point in his career, that he was more interested in exploring his Celtic roots as opposed to focusing on “studio gadgetry.” It didn’t help that many of the songs were being written while Ure was still touring in support of his successful solo debut, The Gift.

“I was faced with songs that I wouldn’t necessarily want to do but felt obliged to do,” he says. “It was a splintered album from a band that was kind of lost.”

Getting Ultravox back together two decades later was a curious proposition.

“We didn’t know if we had anything to say at all,” he says.

It had been 30 years since the release of Vienna and the general thought was that it was a now-or-never situation.

“We thought, ‘Wouldn’t it be great to play these songs one more time?’ and that was it.”

The band even turned down an offer from Universal Records in Germany.

“But, of course, the moment you mention the possibility of making a record, you start to talk about how you would do it,” he says. “Once those conversations start, you’re done. You’re already in; you just haven’t recorded or written a note yet.”

The band locked themselves up in Ure’s home in Montréal and quickly discovered that they did still have that spark.

When asked if Ultravox would ever get back together, Ure says that it was “open ended,” that if an “interesting project” came up, they’d discuss it. Ure notes that recent blogs from Billie Currie suggest otherwise. Currie appears to be done with Ultravox.

“If nothing else happens, we’ve at least put the icing on the cake, and it’s good icing,” Ure says.

The silver lining here is that Ure continues to perform many of the Ultravox songs as part of his solo sets. He confesses that there might be more in the set for this tour than in the past, but when you have so much material to pull from, you go with whatever takes your fancy.

Ure says, “Just because it is old, that doesn’t mean it is dated.”

Interestingly enough, when I bring up the fact that “Become,” one of the standout tracks off of Fragile, also managed to make its way on to Demons to Diamonds, the final release from Visage, he reveals that it was never supposed to be that way.

Rusty Egan had played the drums in numerous Ure projects, including Rich Kids and Visage, and was a DJ at Blitz, the infamous New Romantic nightclub in London’s Covent Garden where the Blitz Kids like Boy George, Marilyn and Martin Degville (future singer of Tony James and Neal X’s Sigue Sigue Sputnik) first caught the attention of the British press. He had some new equipment that he wanted to test out. Ure passed along an early version of “Become.”

Ure tried to keep the track off of Demons to Diamonds, but shrugs it off and says, “That what you get when you let your friends rummage through your audio files.”

Ure notes that he turned down the opportunity to rejoin Visage because he didn’t see the point. He and Egan put Visage together as a studio project that would allow them to work with some of their favorite musicians. It also gave Ure the opportunity to work as a producer.

“They wanted me to be a part of it, but I knew I would end up writing all the songs,” he says. “I’d rather concentrate on what interests me, which is my solo stuff.”

Looking ahead, Ure says that he is working on two projects. One is new material, but the other is revisiting his favorite songs from throughout his career with the help of an orchestra. The orchestral project is about 80-percent finished.

As for his opinion of “Do They Know It’s Christmas?” after all these years?

He candidly says, “It’s an OK song but a brilliant moment that achieved a lot.”

Ultimately, Ure says that he wants to be remembered as someone who “built wagons, rather than someone who just jumped on them.”

Come celebrate the career of one of the most influential artists of his generation at The Complex on Jan. 16, 2017.